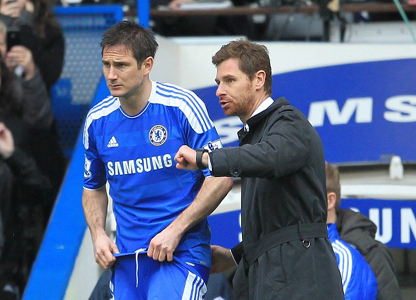 Poor Andre Villas-Boas; he wasn’t to know. Less than four months after receiving the boot for daring to upset the established order at Chelsea, the Portuguese coach has taken control of Tottenham Hotspur following the departure of everybody’s favourite cockney gaffer Harry Redknapp. Out of the frying pan and into the blazing building, some might say.

AVB was sent packing by Roman Abramovich after just nine months at Stamford Bridge. The 34-year-old arrived in London with a glowing reputation following his incredible undefeated season at Porto and immediately initiated his “three year plan”, aiming to phase out the infamous Chelsea “old guard” and build a new dynasty that Mr. Abramovich could call his own.

Unfortunately for AVB, Messrs. Lampard, Drogba and Cole didn’t take too kindly to being dropped to the bench for crucial games against the likes of Swansea City and Napoli and made their feelings quite public. When Villas-Boas made the mistake of responding to such outbursts by dropping the guilty parties to the bench once again, there was simply no looking back. Villas-Boas’ tenure at Stamford Bridge was doomed to end the same way as so many managers before him.

Roberto Di Matteo reintroduced the old guard to the side during the season run-in and steered Chelsea to the FA Cup and Champions League trophies, leading many to question whether AVB had been too hasty in trying to phase the Chelsea “old guard” out of the first-team. Villas-Boas has now signed a three-year contract at White Hart Lane and already there are rumblings about whether or not the Spurs’ first-team, many of who are allegedly loyal to Redknapp, will play for the charismatic and at times arrogant new coach.

Ultimately, the speculation surrounding the dressing room response to AVB’s appointment highlights a much uglier issue at the heart of the modern game: “player power”. It has been well documented for years that the Chelsea “old guard” have carried a considerable amount of weight and authority at the club (they were able to push through a pro-air rifle and smoke grenade policy at Cobham training ground after all) and now several Spurs’ players are said to be considering whether or not they want to play for a manager who isn’t Harry Redknapp.

And Villas-Boas’ move through London isn’t the only example of “player power” dictating the future of a football club. Robin van Persie confirmed last week that he would not sign an extension to his current contract at Arsenal, which runs until next summer. The Dutch striker was unimpressed by the club’s ambition after a meeting with the board and manager Arsene Wenger and chose to break the news to the world himself with a post on his personal website.

It’s fair to say that van Persie had something of a sensational campaign for the Gunners last season, grabbing 37 goals in all competitions, and he made clear on several occasions that he would only stay at the Emirates Stadium if the club could prove to him that they were prepared to challenge for major honours this season. Van Persie has as much right as anyone to refuse to sign a new contract but ultimately, he is at present under contract to Arsenal Football Club and Arsenal Football Club should not have to prove to van Persie that they are worthy of keeping hold of his services. That is not the way the sport should be operating.

Don’t believe me? Ask Ian Holloway. I’m sure you remember that minor incident a few years ago when Wayne Rooney handed in a transfer request at Manchester United because, as with Robin van Persie, his club hadn’t given him “adequate reassurances” that they were prepared to seriously challenge for major honours. Rooney and his agents and advisors ultimately held one of the world’s biggest football clubs and one of the most decorated managers in the game, Sir Alex Ferguson, to ransom. There was even speculation that Rooney may follow Carlos Tevez and sign for United’s newly-minted “noisy neighbours”, speculation that was indefinitely quietened when Rooney put pen-to-paper on a vastly improved five-year contract worth £250,000 per week. Holloway echoed the thoughts of many a person across the country when he referred to the situation as “wrong, just wrong”.

The stereotype of the average footballer is of being overpaid, unintelligent and unintelligible with more interest in fast cars than the fastest route to goal, but perhaps in the light of recent events that is an unfair assessment. Quite clearly, footballers are reasonably more intelligent than the stereotype would give them credit for, quite simply because in the modern-day game footballers’ have positioned themselves to be bigger than the club paying their wages.

How can it be that two fantastic managers in Arsene Wenger and Sir Alex Ferguson have been held to ransom by their own players? How can it be right that a very talented if somewhat arrogant manager in Andre Villas-Boas can be hounded out of a club he was brought in to prepare for the future, and then face another potential backlash at his next employers?

Of course, it could always be argued that this situation of “player power” is nothing new. Brian Clough experienced such a situation in 1974 when he took over Don Revie’s Leeds United, a team he had publicly criticised on a number of occasions. Clough walked into the lions’ den, determined to see United win the major honours his way, but he only lasted 44 days before the likes of Giles and Bremner convinced the board to part company with the charismatic Clough.

The difference between then and now is that Sir Alex Ferguson did not accuse Wayne Rooney on his first day in Manchester of being a cheating bastard; rather he took the talented striker under his wing and turned him into the prolific, world-class finisher we see today. Arsene Wenger didn’t tell Robin van Persie to chuck all his medals into the biggest fucking dustbin he could find, but honed his technique and turned him into one of the world’s best strikers.

Moreover, Andre Villas-Boas did not write articles for the British press suggesting Chelsea should be thrown out of the Premier League before he took over at Stamford Bridge, yet still he walked after less than a year because he couldn’t win the more outspoken players over. Villas-Boas hasn’t publicly criticised the integrity or honesty of Redknapp’s Tottenham, and yet he still faces a potential backlash over his appointment.

Clough was never going to be a success at Leeds United because of his previous comments and the squads’ subsequent lack of respect for his achievements. The lions chewed Clough up and spat him back out of Elland Road; ensuring that they got their way and the manager did not. The great Brian Clough, for all his public posturing, didn’t deserve that treatment.

So why would Villas-Boas?

Clough subsequently found success at Nottingham Forest and won two European Cups at the City Ground, proving that his time at Leeds hadn’t dented his confidence. At White Hart Lane, Villas-Boas will be hoping for a similar sort of “comeback” by taking Tottenham to new heights and proving that his tenure at Chelsea was not a true reflection of his ability as a manager, but more a reflection of the “player power” culture that is once again enveloping many English clubs.

2 thoughts on “The era of “player power””