Team spirit, comradery and playing on home soil; all factors to England’s success at Euro 2020. Or at least some would say.

But what most people would agree with is how well Gareth Southgate man managed his squad to create a close-knit family. The morale in camp seemed impeccable.

From YouTube videos to interviews, all the players looked thrilled to be representing their country, a desire that has disappeared over recent years for England.  However, one factor that goes hugely under the radar is Southgate’s game management and his use of different formations.

His England side has been noticeably criticised for its defensive style of play and lack of exciting football, even against much weaker opponents. Lining up with a back five and narrowly beating Iceland 1-0 thanks to a 90th minute penalty epitomised this criticism.

But, after admitting that expectations were high and he would take full responsibility if they failed, Southgate experimented with a couple formations and variants in international friendlies and UEFA Nation League matches coming into Euro 2020. And during the tournament, England would rotate between three formations depending on the opponent.

To the delight of English fans Southgate predominantly opted for a four at the back formation, especially against more defensive sides who England would dominate possession against. Despite its popularity in club football, the three lions only elected to use this formation once against a very defensive Scotland.

With the naturally slower tempo to international football this formation allowed England to outnumber Scotland in the midfield and boss 61% possession as well as attack with numbers and width, utilising their fullbacks to assist the front three attackers.

During their stalemate in the second game of the group stage, England kept Scotland in their own half for large periods of the 90. Thanks to the midfield trio of Declan Rice, Kalvin Philips and Mason Mount they were able to press high and regain possession high up the pitch. In attack it allowed Mount to act as a number ten behind Harry Kane, ready to pick up any loose balls on the edge of the box.

Reece James and Luke Shaw were meant to give width to the attack however they lacked any attacking sense resulting in Foden and Sterling playing like wingers and isolating Kane in the middle. These positions gave England a plethora of avenues to attack in. However, like a tourist with no phone signal, England got lost in these avenues and failed to score.

Scotland defended well and caught England out on the counter attack on a few occasions. With the midfield pressed up high it left England vulnerable and opened space behind the defence. Scotland took advantage of this with the pace of Che Adams and Lyndon Dykes and if it was not for some brilliant reflex saves from Jordan Pickford, England may have lost. This may be why we only saw this formation used once and early on in the tournament.

A variation of the 4-3-3 formation and the most popular one used throughout the tournament; this line up gave more cover to the back four whilst still allowing England to exploit wide attacking areas with the fullbacks. This formation was most prolific in their 4-0 Quarter Final win against Ukraine. 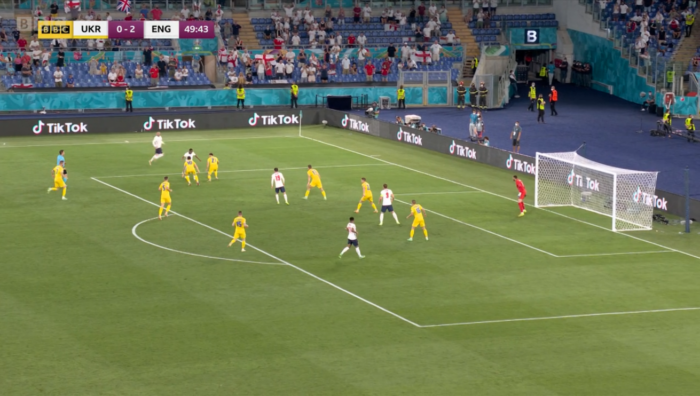 Shaw thrived with the defensive security of both Rice and Philips and bagged himself two assists. For England’s third of the night an overlapping run by Shaw gave him room to pick out Kane in the box and cross to him, unchallenged, thanks to Sterling occupying the defenders. The winger drew the Ukrainians into the box allowing space behind for the overlapping full back to run into. This showed how not only does this formation work well when defending but also when attacking . 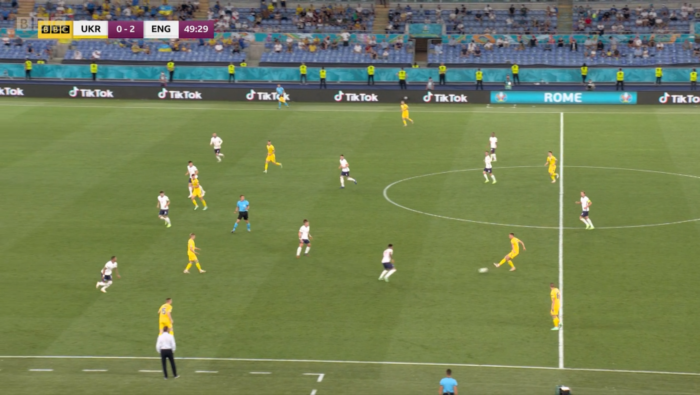 Whilst defending, the congested midfield proved difficult to cut through when the opposition attacked. For the third goal England won the ball back after Ukraine tried to play through the lines. With the security of Rice and Philips it allowed Kane to be higher up the pitch ready for a counter attack and resulted in his second goal.

The more frowned upon of Southgate’s game plans and definitely a more defensive formation. The 3-4-3 is the England manager’s answer to dealing with the ‘top dogs’ of the international scene, who will aim to outplay England.

By introducing the extra centre back this allows for the wingbacks to have full freedom of the pitch. Off the ball they can sit back to form a defensive five and in attack they can push forward to aid the two midfielders and create and attack for the attacking trio. 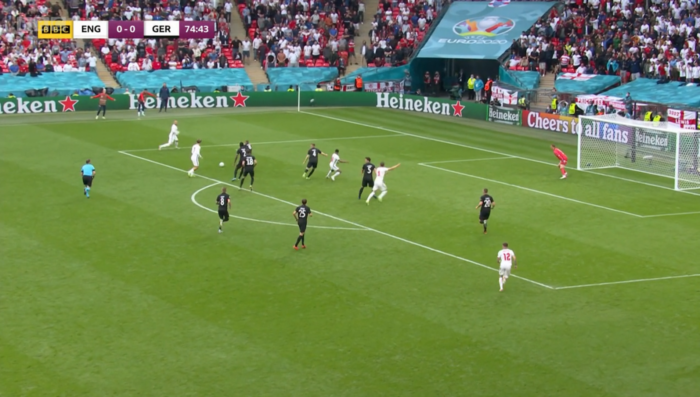 This formation was most successful when mirroring Germany’s three at the back formation. The width of the wingbacks allowed for the wide players in the attacking trio to play more centrally providing Kane with more support and crowding the German defence. This could be seen in Sterling’s goal against Germany. Jack Grealish drew the defenders of the back three inside creating space for Shaw to overlap and get into a crossing position out wide. With a crowded box of three attackers matched up against three defenders, Shaw’s cross was aimed at both Kane and Sterling. As the German defenders struggled to deal with all the players in the box. Sterling beat his man to the ball and tapped in England’s opener against the Germans. 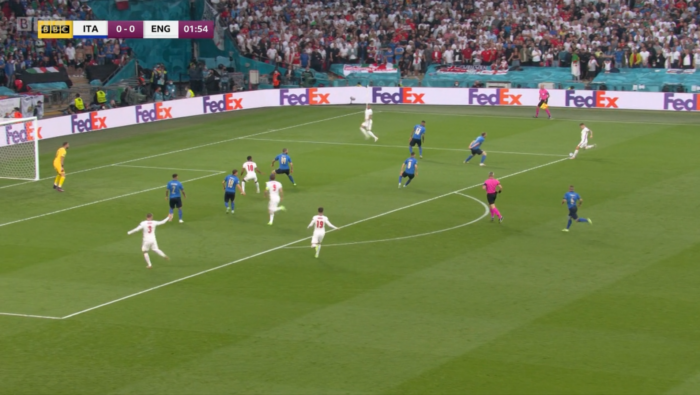 Similarly, the attacking three occupying the defence worked well for England’s goal against Italy in the final. Kane, Mount and Sterling had the Italian defence distracted inside the penalty area as Kieron Trippier curled an early cross in. Unmarked at the far post, Shaw was free once again out wide and cut inside to hit the ball cleanly, unchallenged, on the half volley giving England an early lead.

This formation worked brilliantly at mirroring Germany’s formation but against the Italians it showed its flaws. With Italy manning a three personnel midfield it left Phillips and Rice outnumbered, especially during the second half. This meant either Mount or Sterling had to drop back from attack to fill in. With both the wingbacks sat in a back five it left, at times, Kane isolated on his own up front. When England won the ball back, they then struggled to create many attacking opportunities with just a single target man to aim for. This target man was also up against two of the most experienced veterans in Giorgio Chiellini and Leonardo Bonucci resulting in Italy owning 65% of the possession during the 120 minutes.

What can we expect in next year’s World Cup?

With there not being a year’s break in between this year’s Euros and next year’s World Cup expect to see a very similar squad and therefore formations used in the World Cup. The 4-2-3-1 was excellent at defending well with Pickford keeping four of his five clean sheets in that variation. A formation guaranteed to be used again. Similarly, if England make it to the later stages of the tournament anticipate Southgate to bring back a more defensive 3-4-3 formation against tougher opposition.

But, to get the best idea of how England will line up in next year’s World Cup in Qatar keep a close eye on England’s qualifier matches as similarly to the Euros Southgate will experiment with how he wants to line up in the competition against weaker opposition like San Marino and Andorra. Injuries could also play a factor in how England line up next winter. Without their star full backs, we may have to see a different system implemented.

Football journalism student at the University of Derby. Originally from Worcestershire. Liverpool supporter and lover of all things football.