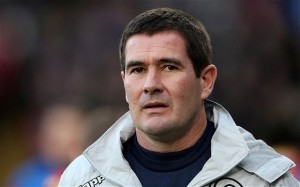 Five days on and it’s still difficult to understand exactly why Nigel Clough was sacked as Derby County manager after four-and-a-half years in charge at Pride Park.

Almost 40 years to the day that his legendary father Brian and his assistant Peter Taylor tendered their resignations at the same club to chairman Sam Longson, Nigel was informed following a 1-0 defeat to (of all teams) Nottingham Forest that his contract was to be terminated with immediate effect…over the phone.

Hardly a fitting way to say goodbye to a man who holds a great deal of goodwill across the East Midlands, and not just on the white side of the A52. Forest fans may have mocked him over the last half-decade but somewhere in the hearts of those born and raised on the successes of the late-70s at the City Ground, there must be respect for a man who remains to this day Forest’s second all-time leading goalscorer.

But why was Clough dismissed at Derby? After year-on-year improvement despite heavy cost-cutting across the board, why exactly was Nigel given the boot just nine games into this Championship season? Performances over recent weeks hadn’t been to the standard that the fans, the board and undoubtedly Clough himself had expected, given the club’s pre-season ticket-boosting mantra of “top six or nothing”. Three straight losses had, presumably, made Clough’s position untenable in the eyes of the club’s owners (some of whom remain completely unknown to Derby County fans).

Those defeats had come against Forest, Leicester City (in the Capital One Cup third round) and Reading, teams ready to spend decent amounts on wages and who are among the ten or twelve teams capable of challenging for a Championship playoff spot this year (certainly in the case of Forest, who under Davies have spent over £6million in transfer fees this season so far alone).

Derby’s home form so far in the Championship has not inspired confidence. Having lost only four games at home last season, the Rams have already suffered three defeats at Pride Park, with their only victory a 5-0 thrashing of Brentford in the Capital One Cup second round. In a complete contrast to last season, Derby have looked much more confident on the road, their only away defeat coming against Forest last Saturday.

But how can a season be judged and such a decision justified when the domestic season is only nine games old?

And this season, Clough was given a slightly boosted transfer budget to play with, but no time to see his investments come good. Over his tenure, Clough cut the wage bill at Derby County by more than half whilst keeping the side afloat in the Championship, a notable achievement. This summer Clough spent £750,000 on Scottish striker Johnny Russell and another six figures on Watford’s Craig Forsyth, while putting some of his wage budget toward returning goalkeeper Lee Grant and striker Chris Martin.

There is no doubt that Clough was building a squad to take on the top six this year. But that stuttering start seems to have cost the 47-year-old a chance to take The Rams to the top-flight just as his father did in 1969. According to some reports, an emergency conference call was held between the board of directors and chief executive Sam Rush following the Forest game and Clough was duly informed that his services were no longer required. Barely 48 hours after that phone call, Steve McClaren had been announced as the new Derby County manager on a two-and-a-half year deal.

The return of the Mac to Pride Park has divided opinion but the majority of Rams’ fans are willing to see what the former FC Twente manager can bring to the club where he spent several successful years in the late-90s as Jim Smith’s assistant manager. His time at Forest could hardly be called a success and the less said about the Euro 2008 qualification stage the better, but he does arrive with a glowing endorsement from QPR’s Harry Redknapp and Joey Barton, having spent the last few months as a coach at Loftus Road.

But question marks still remain over Clough’s departure from Pride Park. Why now?Why after a high-profile game away at Forest, always an emotional occasion due to Nigel’s obvious connections with the club? Mr. Rush has said that the decision was taken with the club’s top six ambitions in mind, but how can success be judged after nine games?

It seems those answers won’t be forthcoming. As a club and a fanbase, Derby County must move on from the second coming of Clough, and focus on the return of the Mac. Steve McClaren has brought in Eric Steele and Paul Simpson, two DCFC alumni, to work among his backroom staff and his impromptu half-time team talk on Tuesday night inspired The Rams to come back from 4-1 down and pick up a point. There is reason for optimism in this new era at Pride Park.

Clough’s departure, and the manner of it, will still leave a bitter taste in the mouth. Not least for the son of Brian.

One thought on “The end of the Clough reign…again”