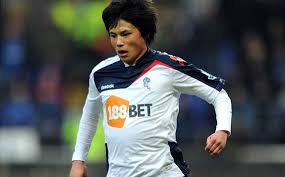 The January transfer deadline day served up some surprise deals but arguably one of the biggest was the Bolton signing of Ryo Miyaichi, a youngster at Arsenal who no-one had really heard of.

And, after playing out until the end of the season, Miyaichi has impressed with Wanderers – despite the club being relegated from the Premier League on the last day of the campaign. In the few months he’s been at The Reebok, Miyaichi has not disappointed and has underlined his promise and potential for the future with various stand-out displays.

But just what has the Japanese international gained from his time with Owen Coyle’s men and what does the future hold?

Before Miyaichi’s move to Bolton, he was playing in the Arsenal reserves having impressed in his Gunners trial back in 2010. Following his trial, the tricky winger earned a loan move to Dutch side Feyenoord where he only managed 12 appearances, before switching back to London. Moving abroad is never easy, especially when doing so at such a young age.

This showed Miyaichi had maturity and was ready to make the step up in the English game. But one thing he was seeking was first team football – something all young players crave as it gives them the taste of the pressure of performing at a high level on a regular basis. And what better place to enhance in your footballing career than at Bolton?

We all know Owen Coyle is a fan of youth after kick-starting Jack Wilshere’s career and then now-Chelsea regular Daniel Sturridge who really shone in the 2010-11 season for Bolton having made the loan switch, like Miyaichi, in January.

Many, including myself, wondered if the midfielder would secure enough first team appearances or if he’d just be used as the odd substitute (like Josh McEachran at Swansea). However, Miyaichi actually made 14 appearances in his several months at Bolton, netting once and chipping in with 2 assists. Coyle showed faith in him, starting him regularly and this can surely only help him in the future.

Everyone was shocked by the collapse of Fabrice Muamba in Wanderers’ FA Cup fixture with Tottenham in March, none more so than the players who had to endure that horrible few minutes of silence at The Lane as Muamba lay down on the floor.

And for a young Miyaichi, who started that game – it was a real shock. Having only joined the team just a couple of months before the incident, it must have been extremely hard for the player to cope with a situation of such magnitude. But, that chilly night in London must be a learning curve for Miyaichi – who was pictured crying at the home match against Blackburn less than a month later following the return of Fabrice.

Hopefully he can take that experience into his footballing and personal life. It brought everyone together and sparked off a sign of unity and togetherness – something that can only be a bonus for Miyaichi who was caught up in a squad at an ultimate low after seeing a teammate and friend holding onto his deer life. A huge lesson learned to be able to cope with such devastation.

What does the future hold?

So now the 19-year-old, who earned his first ever international call-up for Japan in February 2012, has returned to Arsenal – what does the future hold for a player that has proved with worth in one of the biggest and toughest environments in world football – the Premier League. Does he get shipped out on loan again? Does he become a permanent squad member for the Gunners next term? Or does he get moved on abroad?

He definitely has the talent and abundance to succeed. At just 19, he already shows fantastic cohesion, energy, work rate and pace. Infact, according to the Telegraph he clocked a time of 10.6 seconds in the 100m dash – showcasing his sheer ability to make up ground. The man from Japan is a difficult customer and is classed as a star in his homeland.

No Japanese player has really made an impact in the Premier League, but everyone is very excited about Miyaichi,” admits Mori Masatoshi, football writer for The Hochi Simbun.

Arsene Wenger must have surely picked up on the winger’s impressive form at the rear end of last season for Bolton. It’s questionable whether he can overtake Theo Walcott as the next right winger for Arsenal – we all know that is no mean feat. But if he keeps developing the way he is, there is no reason to doubt it.

He’s now got the experience under his belt. He’s played at high level games at the likes of Chelsea and Manchester City, showing no sign of fear or regret – always coming back for more and looking to be a threat on the flanks.

Whether he’s driving down the right or floating inside on the left, Miyaichi is a player full of talent and a possible replacement for Theo Walcott in the next few years. You never know.

As Bolton boss Owen Coyle once said: “He has real ability, he is so fast and he will definitely be one of the big players.”