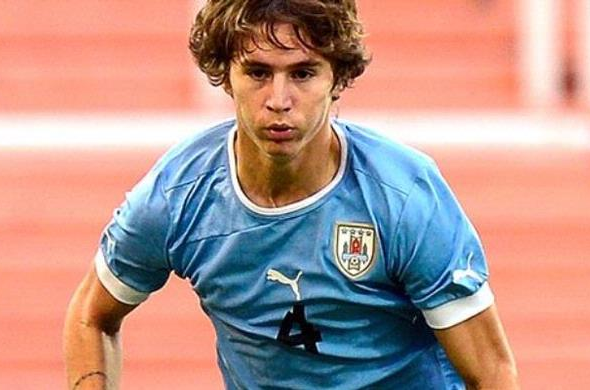 Much was made of Manchester United’s summer transfer window debacle, and although it was the £28million deadline day capture of Marouane Fellaini that made the headlines, the club’s first signing of the David Moyes era was that of Guillermo Varela, a largely unknown Uruguayan right-back.

After impressing the club on a two-week trial, Varela was snapped up on a permanent deal in June from Club Atlético Peñarol, for a reported fee of just under £3million. With the dream of following in the footsteps of- and eventually displacing- fellow South American full-back Rafael da Silva, the 20-year-old arrived at Old Trafford and was handed the number 30 shirt. By securing a first team squad number, many expected him to feature on the fringes of Moyes’ side during this campaign.

However, Varela has struggled to make his desired impact at Old Trafford, and although a regular starter for Warren Joyce’s under-21 side, he is yet to make his first-team debut for Manchester United.

Things went from bad to worse for Varela in early January, when his parents were both involved in car accident in their native Uruguay. The full-back was granted compassionate leave by United and was allowed to return to Montevideo to spend time with his family. Due to the timing of this incident, it was widely speculated in the press that he may re-join former club Peñerol on loan, in order to be closer to his mother and father. However, this move never materialised and Varela shortly returned to Manchester to resume under-21 duties.

A star of Uruguay’s under-20 World Cup 2013 squad, who narrowly missed out on winning the competition after a penalty shoot-out defeat to France in the final, Varela once again impressed on his return to United’s U21 side on Monday night against West Ham. A threat going forward and solid defensively, Varela had a hand in United’s opening goal and was a thorn in the Hammers side throughout the night.

With Manchester United’s first team defensive mishaps very much under the spotlight at the moment, it was a performance that David Moyes would find very difficult to ignore- in fact, maybe he simply can’t afford to.

This season United’s right-back slot has been hotly debated, with first choice Rafael coming under increasing criticism from the Stretford End. His twin brother Fabio has now departed for a starting role at Cardiff City, and the position has been filled by make-shift cover including Phil Jones, Chris Smalling, and even Antonio Valencia, all of whom would prefer to be plying their trade elsewhere on the field.

Although the 2014 World Cup will be undoubtedly too soon for Varela, the full-back may well have an eye on being involved in the 2015 Copa America, of which Uruguay are currently holders. With United’s defence under more scrutiny than ever, their shortcomings may just create an opportunity too good to be missed for the young man from Montevideo.

MA Journalism student based in Manchester

2 thoughts on “The curious case of Guillermo Varela”