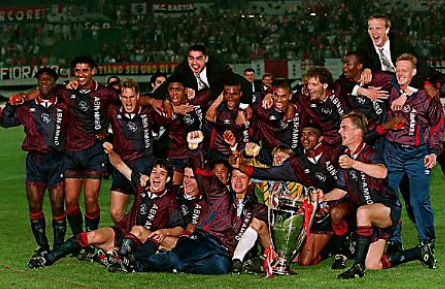 Amsterdam Football Club Ajax is one of the most successful clubs in Europe, with European Cup wins in 1971, 72, 73 and a further win about 20 years later in the renamed Champions League of 1995. However, their recent European campaigns have failed to live up to these past performances. Justin Cormick discusses how Ajax can win again in Europe twenty years since their last success by analysing the triumphant teams from the 70s and 90s.

Ajax was original founded in 1894 as Footh-Ball Club Ajax. The club folded and was re-formed in 1900, renamed as simply Ajax. The name was taken from Ajax the Great, one of the strongest warriors in Greek mythology. Although they received significant domestic success, it was not until the 1970s that Ajax Amsterdam succeeded on the European stage.

With manager Rinus Michels in charge, Ajax created a system of football that would become known as totaalvoetbal, or total football. This system describes the fluid movement of players and the ball. Within a fixed formation players continually rotated and the ball was always moving.

It was with key players such as Neeskens, Haan and Krol that Michels’ side changed football. But the greatest player was John Cruijff, nicknamed ‘Pythagoras in Boots’. Cruijff became Michels’ on-field lieutenant, orchestrating the team to fit the total football system.

In 1965-66, Michels’ first season in charge, Ajax won the Eredivisie, the Dutch Premier League. They won the next two leagues, and in 1969 made the final of the European Cup where they met the great Milan team of the 60s. With the likes of Rivera, Hamrim and Schnellinger, Milan comprehensively defeated Ajax 4-1.

Although Ajax won the 1969-70 Eredivisie, they did not make the European Cup final for that season. Instead their bitter cross-country rivals Feijenoord made the final where they defeated Celtic 2-1 to become the first Dutch club to win the European Cup.

Ajax was runners up in the 1970-71 Eredivise to Feijenoord. But with a 4-0 aggregate defeat over Atletico Madrid in the European Cup semi-final Ajax made the final. With goals from Van Dijk and Arie Haan Ajax were 2-0 victors over Panathinaikos. With this impressive win, Rinnus Michels left Amsterdam to manage in Barcelona. But with Romanian Stefan Kovacs taking over, Ajax continued to play impressive football.

With the 1971-72 Eredivisie title and the KNVB Beker, the domestic cup, Ajax entered the 1972 European Cup final against Inter Milan in great form. The match has been referred to as Total Football’s greatest moment, with Inter desperately defending against a dominant Ajax. With two second half goals, John Cruijff proved himself as one of the greatest footballers of all time.

With their 2-0 victory Ajax secured the European treble. Unfortunately defeat in the 1973 Beker meant they could not retain the 1972-73 treble. Ajax did however win the Eredivisie again, and the European Cup with a 1-0 victory over Juventus. Ajax became the first club since Di Stefano’s Madrid of the 50s to win the European Cup in three consecutive seasons.

After their third European Cup success John Cruijff departed for Barcelona, where he would play once again under Rinnus Michels. At his time in Amsterdam and Barcelona Cruijff was awarded the Ballon D’Or for player of the year three times, a record equalled by Platini, van Basten, and only recently beaten by Lionel Messi.

Without their talismanic total-footballer, Ajax could not repeat their successes of the previous seasons and were knocked out of the 1973-74 European Cup by Bulgarian side Sofia. Ajax would not return to the heights of European football for another 20 years.

After winning two European Cups at AC Milan, Frank Rijkaard returned to Ajax, his former club. Van Gaal built the team around the veteran Rijkaard, who played in a defensive midfield role. With van Gaal, Ajax won three consecutive Eredivisie titles. Their greatest season under van Gaal was 1994-95 in which they remained undefeated in all 34 league matches and made the final of the renamed UEFA Champions League.

Riijkaard would meet his former team AC Milan in the final. Although an ageing squad Milan had plenty of experience in the likes of Maldini, Baresi and Desailly. An 85th minute goal from substitute Patrick Kluivert secured the 1-0 victory for the inexperienced Ajax.

While Ajax could not defeat Milan in 1969 they managed to in 1995. Unfortunately, while they did defeat Juventus in the 1973 final they couldn’t in 1996. Without Rijkaard, who retired after the 1995 season, Ajax was defeated by Juventus in the 1996 Champions League final on penalties.

Despite domestic success in recent seasons, Ajax has failed to triumph on the European stage like their teams of old. In order to regain the crown of European Champions, Ajax will need a good squad of some talented players, led by a specifically excellent player, and under the guidance of a brilliant manager.

The current Ajax squad sees players like Toby Alderweireld, Christian Eriksen, Siem de Jong and Viktor Fischer, all transfer targets for major European clubs. Ajax would go a long way towards European success if they can hold onto these players for a few seasons longer.

But a talented squad on its own is not enough. Have a look at any of the great teams and they are all lead by an exceptionally talented player. The current Barcelona has Messi, the Ajax of the 1970s had Cruijff. Or maybe, like Rijkaard and the 1990s Ajax, a former player could return to the club to lead the young players.

Current Ajax players Christian Eriksen or Viktor Fischer may have what it takes to become a stand out player. Still at a young age, both Danes are wanted by many top European Clubs. Eriksen has been described as the new Laudrup, an Ajax and Barca legend. It is up to both players in the next few seasons to show if they have what it takes to lead Ajax to European success.

Perfect returning legends would be playmakers Rafael van der Vaart or Wesley Sneijder. After beginning his career at Ajax, van der Vaart departed in 2005 for Hamburg, and has played for Real Madrid and Tottenham Hotspurs before again returning to Hamburg in 2012. At 30 in February, van der Vaart will be soon looking for a club to wind his career down at.

Sneijder may even be a better choice to lead Ajax to a European Cup win. Sneijder left Ajax in 2007 for Real Madrid, before arriving at Inter Milan in 2009. Under Jose Mourinho, Sneijder was a key man who led Inter to the 2009 European Treble. After Mourinho’s departure Sneijder struggled in Italy, and recently transferred to Turkey’s Galatasaray. At 29 this year, perhaps Sneijder could move back to his first club in the next few seasons.

Of course, a good squad and a great leader will not be enough, and Ajax will require a brilliant manager with a tactical understanding of the game. Like Michels who ‘adapted’ the Hungarian system into the highly effective total football, or van Gaal who’s Champions League record speaks for itself, the Ajax of the 2010s will need a manager capable of organising a team in the world of modern football.

During his short time as manager of Ajax, former player Frank de Boer has proven himself to be capable of great things. With back to back Eredivise titles, and recent European success over Manchester United and City in 2011 and 2012, de Boer has shown himself capable of choosing the right squads and inspiring his players to win the important games. As to whether de Boer is the man to take Ajax to European triumph, only time will tell.

Ajax will need to learn from the mistakes of their previous generations, and learn to cope with disappointment. After failing to win the 1996 Champions League, Ajax saw many of their key players depart for other clubs. If this had happened in 1969 after Ajax lost their European Cup final, we would never have seen Ajax win three consecutive European finals.

Perhaps if Ajax had managed to hold onto more players after their 1996 final defeat we would have seen the Amsterdammers dominate Europe for several more seasons. If the current generation of Ajax players wish to help their club receive European honours, they too will need to learn to handle disappointing results.

After their recent relatively poor European campaigns, players will be tempted to depart Holland for fame in the Premier League or La Liga. But if they stay a few more seasons they will perhaps help Ajax regain their European fame.

Ajax will also need to keep up their domestic success. After back to back Eredivisie titles, Ajax is on track for a third this season. It has become apparent in recent seasons that while playing European football in the form of the Champions League or Europa League, Ajax have struggled domestically. But as soon as their European Campaign is ended, they return to Holland with a determination to win the league.

It will not be easy, but with some great young talent and an impressive history, Ajax Amsterdam just might have what it takes to win the Champions League and regain their European Crown.

4 thoughts on “The club that should be king: Ajax Amsterdam and the European Cup”