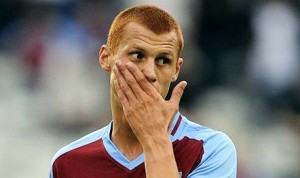 A young midfielder with a knack for scoring goals that dragged a small unfashionable team into the Premier League for the first time in their history.

A description equally fitting for both Steve Sidwell and Charlie Adam.

Both Sidwell and Adam dropped down to the Championship from bigger clubs (Arsenal and Rangers respectively) and excelled in their smaller ponds, now that it seems Adam is destined to re-enter the “big time” – most likely at Liverpool.

However, Sidwell’s experience moving to Chelsea should be a somewhat cautionary tale for Adam. Sidwell only made 7 league starts and a further 8 substitute appearances for the Kings Road club before moving on to Villa where he only started 24 times in two and a half seasons, and his most telling contribution was as a ball boy for a James Milner goal.

Adam will not be an automatic first choice player at Liverpool. Lucas, Raul Meireles and a certain Steven Gerrard are also vying for central midfield berths. The modern tactical requirements for a holding player like Lucas mean the competition is most likely to be with Liverpool’s best player since Christmas (Meireles) and its favourite son.

Charlie Adam plays exceptionally well week in, week out for Blackpool. Not playing regularly can really affect player’s rhythm and Adam needs to demonstrate he, unlike Sidwell can produce on a more ad hoc basis than he currently is required to do.

Bad luck, also befell Sidwell at Chelsea, the manager who signed him departed. Avram Grant replaced Jose Mourinho and chances were limited for the midfielder.

Although, Dalglish may rate his fellow Scot, Adam – he is not certain to remain in post beyond the summer.

Risk aversion should not ultimately be enough of a reason to not take on a new challenge, players like Tim Cahill have made the step up from Championship to Premiership with relative ease. However, a keen appreciation of all the factors behind their own recent success, especially when it has not been a constant feature of their career might help players avoid making adverse transfer decisions.

Hopefully, Charlie Adam succeeds wherever he ends up and Steve Sidwell replicates his Reading form at Fulham and reaches at least some of the heights that he alluded to whilst at Reading, but sometimes certain players have a moment in time at a club when they are on top of the world, and try as they might they cannot rediscover those halcyon days elsewhere.