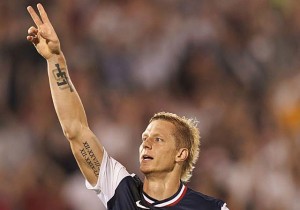 It’s the CONCACAF Gold Cup group stages on July 13th 2013 – USA play Cuba. A 6ft 3′ winger by the name of Brek Shea gets a rare start for the USMNT. After 45 minutes, he gets subbed off after losing the ball 14 times in one half and having a limited if not detrimental impact on the team. It was a performance in which he was slated by the US media.

July 16th, Shea comes on as a substitute in a cagey quarter final clash against Costa Rica in the 81st minute, six minutes later he scores the game winning ball after latching onto a perfectly weighted cross from Landon Donovan. The crowd are sent into ruptures as Shea scores his first ever goal for his national team. His big Texas smile is clear for all to see.

July 28th, the Gold Cup final. The 23 year old enters the game in which the opposition (Panama in this case) look to be playing for extra time or a fortunate goal on the break. This time round it takes only one minute for Shea to score the tap in which wins USA the whole tournament – a simple tap in, but the goal which crowned the US kings of CONCACAF. The fans singed his praises. He was a game winner.

Welcome to the mysterious world of Brek Shea. With perhaps the exception of Freddy Adu, no other player in US Soccer history has been able to divide opinion among fans quite like Brek Shea does. The cynics regard him as a talentless, overvalued and over-hyped individual who tarnishes the definition of ‘the next big thing’. Then there are the optimists, those who believe that Shea has incredible potential. The potential that could rise Brek up into the stratosphere of the footballing elite – competing alongside great, powerful wingers like the Bales and Ronaldos of this world. The common denominator between the two viewpoints though is blatantly obvious, Shea has yet to show the vast potential that was once promised – an enigma which USMNT head coach Jurgen Klinsmann also sees.

I think that element with Brek, coming in and taking people on and having a surprising element in his game, I think every opponent would feel that. As a coach, you think, if you do something now, what would an opponent feel from your end. And you see a guy like Brek, [he’s] unpredictable, for himself and for the opponent. 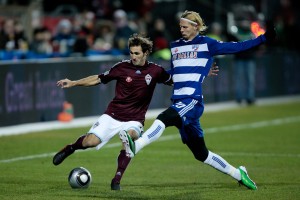 That unpredictability has shadowed Shea not only onto the pitch but throughout his career off it. Shea went straight out of high school to play professionally at 18 years of age when he was drafted by FC Dallas as a second pick overall. It was clear even then scouts saw potential, this was only reinforced when he had a trial at Bolton in 2007. Due to Shea’s height and strength, Dallas coach Schellas Hyndman was unsure of his primary position therefore Brek was tested as a striker, a central midfielder and even a central defender over a course of two years! It wasn’t until the start of the 2010 season when Shea was placed as a left winger but even that then changed again when in 2011, Shea started as a center back before going back to left wing again. Just like Gareth Bale in his formative years, it took a while to discover where Shea plays best. It was unquestionably a chaotic start to young Shea’s professional career.

Off the pitch, Shea boasts the epithet of an eccentric. His outrageous and seemingly ever-changing hairstyles (from cornrows to faux hawks), six tattoos alongside his own abstract art studio, in which he donated the money from the pieces of art he sold to the FC Dallas foundation, caught the eye of many. His unconventional nature placed him as the potential poster boy of US Soccer, the one to inspire the next generation. 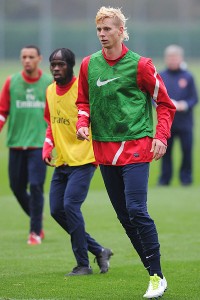 2011 was and to this day still is Shea’s most successful season so far as a professional. Shea led FC Dallas in goals, contributed a number of crucial assists and was nominated for the MLS All-Star game, he was unable to play though due to club commitments. Shea was also a nominee for the MLS MVP for that season. His pace, strength and technical ability shun through in 2011 with clubs in Europe taking notice (reportedly Manchester United, Manchester City and Liverpool). The Brek Shea hype had reached boiling point when it was announced in November 2011 that the US international was to spend a month training with Arsenal, the club renowned for spotting the world’s best young talent. You could imagine the excitement in US Soccer circles.

After the month at Arsenal didn’t culminate into a transfer, Shea returned to Texas with large expectations placed on USA’s next soccer star. The expectation proved too much as the 2012 season saw Brek score only three goals in an injury riddled season. Mid-season,the disciplinary problems began. The 22-year-old was suspended for three Major League Soccer games for kicking the ball at an assistant referee during a game on May 17, then was benched for two games by Schellas Hyndman after arguing with the FC Dallas coach when he was taken out of a game on July 18th. Shea was also part of the US U23 squad which shockingly was unable to qualify for the London Olympics. Brek Shea’s time at FC Dallas was coming to an end yet no one could have predicted that on January 31st 2013, Shea was to join Stoke City on a four-and- a- half year deal.

Shea had followed US compatriot Geoff Cameron (who joined Stoke in 2012) across the Atlantic to start a new chapter in his life. Brek has certainly not caught the Premier League alight so far, managing only two substitute appearances. The constant battle with fitness and injury kept him sidelined for longer than expected with Pulis claiming him to be ‘one for next season’ (except Pulis will not be a part).

Once more, his antics off the pitch has raised more eyebrows than on it. Shea has caused a stir for being the one to have posted up the picture of the pig’s head founded in Kenwyne Jones’ locker. Furthermore, Shea also had to remove an instagram photo of him holding two firearms up in the air even though it is perfectly legal in his homeland Texas. Shea also seems obsessed with promoting his brand ‘Left Foot Studio’ which ‘displays Shea’s unique abstract art style through his paintings, clothing and boards’. Shea’s off-the-wall and exuberant personality can get him into trouble but strangely only seems to add to his likability. A powerful blend which could generate a large, almost cult-like following.

For Shea to get fans onside though will be the performances he puts in on the pitch. With the 2014 World Cup coming up, Shea will need to impress Mark Hughes, a man with a track record of successfully utilizing American players (Brad Friedel and Clint Dempsey). Shea’s overall impressive contribution at the Gold Cup should get him more regular playing time while Hughes has stated his intentions for his Stoke side to play more expansive, free-flowing soccer than last season which should cater better for the maturing 23 year old. 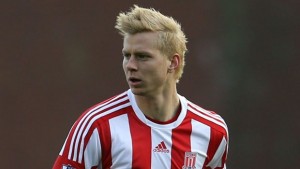 The physical rigors of the Premier League should not prove to be a challenge for Shea unlike it is for other foreigners entering the league. His technical ability isn’t a stumbling block either. The question is a mental one. Will Shea’s problems of the past – the expectation, the disciplinary problems combined with his eccentric personality become too much, too overbearing or will he have the toughness and endurance internally to push on to becoming a rounded, powerful and dynamic soccer player?

From his time at FC Dallas to the Arsenal trial, his surprise transfer to Stoke City and the success at the Gold Cup – it seems that for Shea, defining moments lead to dramatic changes in his career. If Shea has a strong breakout 2013/14 season then securing that place in the 2014 World Cup Squad might not be as far fetched as once thought. If he secures that ticket to Brazil, then who knows where Brek Shea’s future may take him? Perhaps he could join the elite that was once prophesied all those years ago. It sounds cliché but its worth saying: the enigma that is Brek Shea is a strength, not a weakness – he has the chance to show he is more undervalued than he is overrated. At 23 years of age, now is the time for Brek Shea to prove his worth.

One thought on “The Brek Shea Enigma”