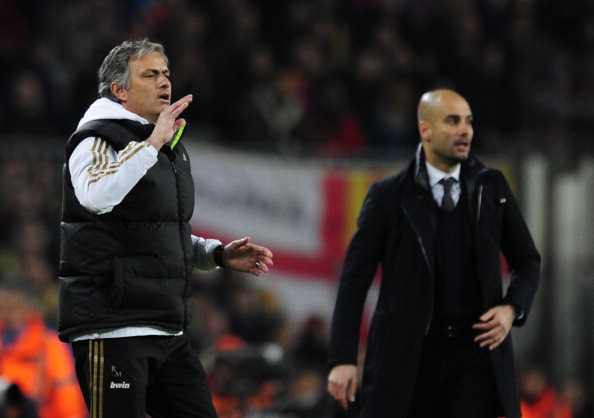 This season has seen a continuation of a debate that has developed around European football in recent years. With some distance and perspective being put between both managers’ time in Spain, and the 2014 Champions League maturing towards its place in history, the question as to which coach, Mourinho or Guardiola, is ‘the greater manager?’ persists.

The comment was passed in recent months that, while José can strut about with his trophies hanging out, Pep was the man who revolutionised modern football with his Barcelona side, and Mou can never claim to have achieved that. Conclusion; Pep is the greater manager.

But has Pep changed football forever? Two years have passed since he left the Catalans, walked away from the best side in living memory [caution needed] and watched from a far as they stagnated for a season before the club’s footballing identity was slowly hacked away at by Gerardo Martino, a process aided by an ageing Xavi and Iniesta, and Sandro Rosell undermined the social and political legacy of the institution. More Than a Club. Just Do It. World’s 5-star airline.

As the second legs of Europe’s ‘Big Cup’ semi-finals give way to the tournament’s zenith in Estádio da Luz, a match that will feature neither manager, what is Guardiola’s real legacy in terms of revolutionising modern football? The only team to reach the latter stages of the tournament that play the style of ‘tiki-taka’ football that became synonyms with Pep and his Barça are Guardiola’s own Bayern. The other three semi-finalists’ footballing philosophies are more similar to each other’s than to Munich’s; physical, direct and willing to cede possession to free-up space.

All three teams are also happy to put men behind the ball when facing teams who will try and press and dominate like a Pep side would. While some clubs will be more to the extreme than others in this regards, yes I’m looking at you Mourinho, the differences, and lack there of, can be summed up by two comments made before and after the first legs of the semi-finals. The first of these was made by Atlético Madrid’s captain Gabi when he was asked, in the run up to the first match against Chelsea, how his team will deal with the London club giving up possession to hit Atlético on the break. His response was; ‘If Chelsea give us the ball, we’ll instantly give it back to them.’

The second comment was made by Guardiola himself, reacting to his side’s defeat to Real despite having 72% possession and making more than twice the amount of passes as Madrid, condescendingly stating that “They are the best counter-attacking team in the world, they have legs, they are athletes. They are football players, but mainly athletes.” Pep was almost suggesting that a direct physical game was not football. Yet how Real approached the game is almost exactly how Atlético and Chelsea would have played. And it wouldn’t surprise anyone if both those teams were watching the other side of the draw thinking ‘give us Bayern in the final!’

One could almost argue that what transpired for Bayern in Madrid and Munich has been on the cards since the Super Cup. Bayern may have exacted penalty shoot-out revenge on Chelsea in that match. But Chelsea didn’t look particularly good on the night, yet were only seconds away from beating Munich. Now both managers have had a season to implement their respective philosophies at their respective clubs and a rematch in Lisbon would have been intriguing. But both managers were out-thought and out-played. Bayern recorded similar possession stats to their game in Madrid (With 70% possession and 586 passes to Madrid’s 216) yet were blown away by three goals from set pieces and one outstanding counter-attack.

While Mou took his team to the other extreme, yet, unlike against Liverpool and uncharacteristically for the team with the best defensive record in the English Premier League, Chelsea were punished for defensive errors and allowed Atleti get behind their backline far too often. Atlético looked like the team Chelsea were promising to be towards the end of January. But both Pep and Mou were outdone by their own extremes; Pep’s side lack penetration and José’s decision to go with six recognised defenders in Stamford Bridge meant that Chelsea were bypassing midfield with ineffective long balls from deep to Torres when trying to hit on the break.

Since Liverpool’s defeat to Chelsea a passage from Diego Torres’ controversial book on Mourinho’s time at Madrid has been doing the rounds. It claims José came up with a code for big away games, bare in mind that for the majority of his tenure many of these ‘big games’ were against Pep’s Barcelona. The code in Torres’ book reads as follows:

1. The game is won by the team who commits fewer errors. 2. Football favours whoever provokes more errors in the opposition. 3. Away from home, instead of trying to be superior to the opposition, it’s better to encourage their mistakes. 4. Whoever has the ball is more likely to make a mistake. 5. Whoever renounces possession reduces the possibility of making a mistake. 6. Whoever has the ball has fear. 7. Whoever does not have it is thereby stronger.

Judging by last week’s match, it looks like Carlo Ancelotti didn’t throw out the code when he replaced Mou at the Santiago Bernabéu. However, the irony lies in the fact that it looks like in building a team that will cede possession and hit on the counter Mourinho has cost his side the league title. They were unable to break down Aston Villa, Crystal Palace and Sunderland in recent weeks; a victory in any of these games would have them in the driving seat for the Premier League. Yet in Germany, Bayern have romped to their twenty-fourth title in a record number of games.

But it’s not been plain sailing for either manager. Mourinho has had to contend with a tedious debate around the morality of how he sets up his teams. While in Munich, despite his success, Guardiola has received criticism for his philosophy. Including calls that his team was ‘too predictable’ following defeat to Madrid and earlier in the year Bayern legend Franz Beckenbauer claimed that Pep’s tactics could leave the club “unwatchable like Barcelona.” Football, as always, remains a game of opinions. Yet it’s interesting to hear talk that Guardiola will be pursuing a change in personnel at the Allianz Arena this summer, a search for players with the technique and vision to match his philosophy, despite the current crop having won every trophy put in front of them last season.

Yet the test of it all, rather than delving into tactical nuances or lack of plan b’s, could be seen in the influence of both men on the game. If Guardiola has revolutionised European football, then where are all the possession hungry, ‘tiki-taka’ clubs? Those managers around the continent that are heralded as playing exciting, progressive, football are not buying wholesale into Pep’s legacy. Rodgers is fond of possession, but his team are more fast and direct than any team Guardiola has put out. The same could be said for Diego Simeone, Roberto Martinez, Jurgen Klopp and, even the man tipped as possibly the next Barça manager, Ernesto Valverde. All three managers play a brand of football that could be said to involve, in varying degrees, eye-catching, possession based, pressing and *insert modern football cliché here* football. But none can be said to be true disciples of Pep.

One could argue that for both Mou and Pep, the yin and yang of modern football, the biggest complement as to the legacy of both would be that those who have attempted to follow them have done so by aspiring to emulate the two things they share in common; the manner in which the two try to approach the game as intellectuals and the way each man’s personality and intensity, however different, quickly comes to embody the clubs they are both at. And while the winner of this years Champions League will most likely be playing a style that Mou would be more comfortable with. I would also say that, if you had to press the idea that each man has affected it, modern football is the bastard child of both men.

And for all the Mourinho detractors out there: let’s not forget that José could be credited with ushering in the beginning of the end of the 4-4-2 in English football. And that’s all the more reason to hate Tim Sherwood.

One thought on “The Adventures of Mou and Pep”