The loss of Paul Pogba to Manchester United’s midfield has been far worse than first anticipated.

Despite the inevitability surrounding a possible the Frenchman’s departure in the summer, he been superb when called upon this season, ensuring Bruno Fernandes is not the sole creator on the pitch.

Despite occasionally being played out wide in big games – primarily because of his manager’s preference for Fred and Scott McTominay in the centre – Pogba’s best position is the left side of a midfield spot in a double pivot partnered by one of either Fred, Nemanja Matic or McTominay.

Arguably 28-year-old’s best attribute is his passing, with many believing he is the best in the Premier League at playing long balls into channels with either of his feet. Pogba’s ability to play early passes over the top of defences from deep was displayed perfectly with his assist for Anthony Martial’s goal against Sheffield United. 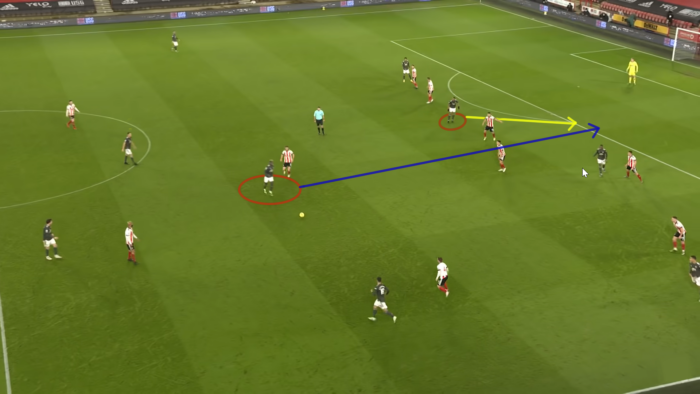 Here, Bruno Fernandes plays a simple pass to Pogba on the edge of the attacking third before Pogba gently lifts the ball over the defensive line for Martial to take round the oncoming Aaron Ramsdale. Pogba’s vision allows for him to see the pass while his technical ability means he can make it with his first touch. This ability means the defence have no warning and therefore cannot retreat in anticipation of the ball. Pogba’s long-range passing ability is shown by his impressive 3.8 switches per 90; for context Matic has the second most switches per 90 with 2.5.

United’s recent display against Crystal Palace showed how ineffective it is to line up two defensive midfielders against lesser sides happy to yield possession. The midfield two of Matic and Fred shielded the back line very well, however they were poor in bringing the ball forward and playing either line splitting passes or balls in behind defensive lines.

Although Matic is a good passer his passes against Palace show a high volume of conservative sideways and backwards passes backed with Maguire, Shaw and Fred receiving 59% of his successful passes.

McTominay and Fred too must be criticised for their passing. Fred tends to attempt a decent number of long balls per 90, 12.4 at a 79.5% success rate. But Fred’s reluctance for first time long passes (similar to Pogba) means these passes are less efficient or indeed effective.

McTominay on the other hand averages the least passes per 90 (52.6) from all analysed midfielders and appears to have a reluctance to play longer passes. This shows he is not a pure offensive force whilst his relatively limited defensive output does shows he may not be able to single handily anchor the midfield like Matic or Fred.

Pogba’s passing has allowed the Red Devils to set off on quick counter attacks while his press resistance has allowed United to become a possession dominant team who consistently play out from the back although, admittedly with varying results.

His ball carrying ability puts him amongst the best midfielders in Europe. His first touch, dribbling ability and strength has made the Frenchman press resistant in an era dominated by gegenpressing.

Other than Pogba none are accomplished dribblers with Fred and Matic averaging 0.98 per 90 compared to Pogba’s 1.87. This loss of a dribble is huge as they not only help in beating high presses but also act as a fantastic link to the front four.

Fred is probably the least press resistant of the bunch due to his poor first touch. Fred’s inability to consistently control passes means he is quite often the target of an opponent’s press. One must look no further than the second PSG game to confirm this. A simple pass poorly controlled by Fred meant he had to dive in to win back possession however, this resulted in a foul and a second yellow card.

On the other hand, Matic’s role as an anchor man often sees him dropping between the central defenders to build up play. His carries and dribbles don’t have the same affect as Pogba’s mainly due to how deep he starts.

Despite the rarity of Pogba’s scoring, they have been vital this season, including winners against both Fulham and Burnley. Despite Solskjaer playing Pogba in a deep midfield role, four league goals in the last two seasons is still quite poor. Although, Pogba’s out performance of his XG this season means his ability to wait for pull backs on the edge of the box is a viable option.

Of the other three midfielders, McTominay is undoubtedly the best goal scorer. This, however, is not hard considering both Matic and Fred have failed to score a league goal in the last two seasons. Originally an attacking midfielder in the United youth set up, McTominay was forced to move to a more defensive position to be afforded his first opportunities under Mourinho.

Due to McTominay’s past it is therefore no surprise Solskjaer has turned to him in Pogba’s absence to push the midfield forward, this was especially evident against Crystal Palace. As soon as he came on for Fred he attempted to push the team forward, receiving his first pass on edge of the Palace box. In terms of finishing, McTominay has greatly improved, considering he scored twice in his first two seasons however he has scored eight times in the last two seasons outperforming his XG by 5.4 in the process.

Fred’s shooting on the other hand is easily his worst attribute. Despite averaging 1.42 shots per 90 across Manchester United career Fred has only managed one league goal with less than 10% of these shots even being on target.

It is no surprise that since losing Pogba against Everton, United have dropped points against teams like Palace and West Bromwich Albion (both of which should be comfortable wins), effectively handing Manchester City the title. It is clear with Pogba’s incredible ability that no one in the United squad can imitate him but Donny Van De Beek is probably the closest. If the manager wants to continue playing 4-2-3-1 Van De Beek should be asked to line up in Pogba’s position in the double pivot with Matic.

Van De Beek’s versatility means Solskjaer must utilise him in positions other than Bruno Fernandes’ Number Ten role, after all chances will be very limited when playing second fiddle to the club’s best player. However, a double pivot of Matic and Van De Beek would be perfect against teams who surrender possession with Matic’s defensive mentality complementing Van De Beek’s attacking prowess.

In the summer, Manchester United must target a mobile defensive midfielder able to control midfield in a single pivot, letting both Bruno and Pogba (assuming he doesn’t leave) or Van De Beek play as two number 8s, similar to David Silva and Kevin De Bruyne in previous Manchester City teams.