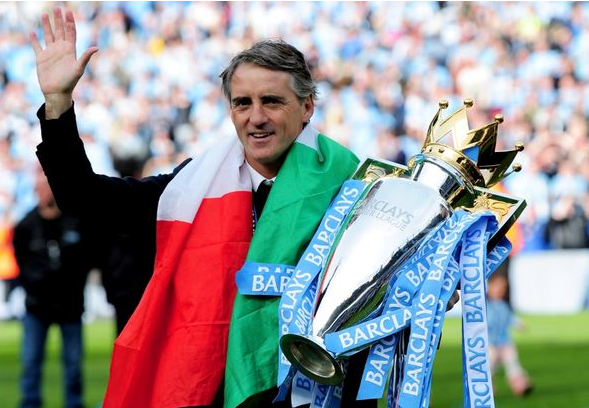 Here we go again. Just when Manchester City fans were getting used to a bit of stability after going through 12 managers in 15 years, number 13 has been given his marching orders.

On the first anniversary of the club’s Premier League title the club’s owners have made the decision to part ways with the man who delivered the trophy, Roberto Mancini.

From a fan relations perspective, the timing couldn’t have been any worse. May 13th is supposed to be ‘our day’, time to reflect back on what was the most unbelievable ending to a top flight season ever (sorry Michael Thomas). Instead the date is now tainted.

The fact that Mancini won’t even be afforded a proper send off from the fans who vocalised their support for him so strongly at Wembley on Saturday also leaves a bad taste in the mouth.

It’s not the first time the current owners have treated a manager poorly; Mark Hughes was also on the end of it back in 2009 but no one batted an eyelid because it was “ex-Rag” Mark Hughes.

Now though, the majority of supporters on forums and social media are united in their disappointment at how the Italian’s dismissal has been handled.

Of course, fans aren’t privy to what goes on behind closed doors and talk of dressing room unrest has been doing the rounds for a long time. Indeed, many have suggested that the dismal performance against Wigan in the FA Cup final was borne out of the frayed relations with the manager.

I take such accusations with a pinch of salt however and, maybe naively, believe that once the players were out on the pitch they would get on with the professional job of winning the trophy. Admittedly the weekend’s result goes against that theory.

Either way, it’s hard to believe that losing the cup final was the final nail in Mancini’s coffin and even if City had beaten Wigan he may have still gotten the chop.

From the club’s official statement:

Despite everyone’s best efforts, the Club has failed to achieve any of its stated targets this year, with the exception of qualification for next season’s UEFA Champions League.

This would suggest that a combination of finishing second in the league, reaching the cup final, and playing in the Champions League is not acceptable. Is that really what we’ve become? It certainly reads that way.

Of course, Mancini got some things wrong. His blind faith in Mario Balotelli probably went on a bit too long, his experimentation with three at the back confused the players as much as anyone else, and there have been questions raised about his use, or lack thereof, of youngsters in the first team.

While the Champions League exits were disappointing, the draws were hardly favourable and it was always going to be an uphill battle as third seeds. It will be interesting to see how his successor gets on in the same circumstances next season when a Borussia Dortmund/Real Madrid/Ajax type ‘Group of Death’ is again a possibility.

The club dropped the ball last summer in terms of signings. While Mancini wanted to go all out and get Robin Van Persie, or at least someone of his ability, Brian Marwood instead recommended the likes of Scott Sinclair. The result? City stayed still as Manchester United kicked on, winning the title thanks in large part to the Dutchman’s goals while Sinclair has barely been seen over the last nine months.

With all that said, it’s important to reflect on the great moments, there were plenty of them over the past three years – the 6-1 win at Old Trafford, the first trophy in 35 years, the first league title in 44 years…and that’s before you even get to statistics like the unbeaten home record that lasted two years.

I’ll miss Mancini; from day one he got the supporters on side by wearing that blue and white scarf which became a permanent fixture in his match day attire, and his post match interviews always provided a chuckle.

He earned the respect of Manchester United manager Sir Alex Ferguson and is one of the few to have properly gotten under the Scot’s skin over the past 27 years. It was wonderful to watch.

When we get to Old Trafford we will take the banner down! It is the last year it will be up, for sure.

Whatever about anything else, for that much City fans will always be grateful.

One thought on “Thanks Roberto, it’s been great”