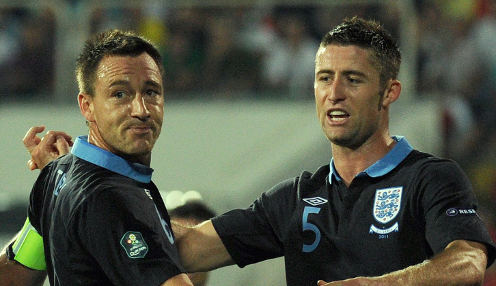 It said a lot that the real international story this week was Luke Shaw receiving an overdue call-up from Roy Hodgson.

Despite the 18-year-old being the Premier League’s most consistent left back this season, it took Hodgson eight months to award him a place in the England squad.

Ahead of the World Cup in five months time, it brought much needed vitality to Hodgson’s continually predictable regime – which has relied heavily on those aged 28 or above.

Thus, cynics would speculate that it was relief – as much as patriotism – that led to Shaw’s tearful reaction in informing his mother that he was one of three left backs selected in Hodgson’s 30-man squad.

Clearly, anyone outside this pool – including the likes of Gareth Barry, Adam Johnson and Andy Carroll – face a difficult task to force their way into Hodgson’s plans if his first-choice options remains fit.

Yet, there remains a continued elephant in the room: John Terry.

A front-runner for this year’s PFA Player of the Year award, Terry’s leadership has been crucial to Chelsea’s title charge and the Blues having the meanest defence in the Premier League, with just 22 goals conceded.

In an England side that looks most vulnerable in central defence, Terry has, arguably, had his most impressive season since 2005-06.

After all, of the paltry four games the 33-year-old has sat out this season, Chelsea have suffered their most shocking results of the season: a 1-2 defeat to Basle and a 2-1 loss to Sunderland.

Despite being the heartbeat of the 2012 Champions League win over Bayern Munich, Terry’s teammates, David Luiz and Gary Cahill, do not look as formidable a partnership without Chelsea’s talisman.

Cahill has looked particularly assured alongside his compatriot and the duo have proved themselves as the league’s most reliable central defensive partnership.

After all, for all his marshalling and bravery, Terry is best suited alongside an intuitive coverer, as Ricardo Carvalho proved from 2004-10.

Since Carvalho’s departure, Terry’s flagging qualities – namely his pace – have been more apparent and in tandem with his off the field misdemeanours, it seemed that Terry’s professionalism and quality had regressed simultaneously in recent years.

Finding redemption in Rafa Benítez’s rotation policy last season  – amid the grooming of David Luiz as the leader of the new Chelsea generation – proved difficult and humiliating for an ego like Terry.

That is why Terry was so keen to use nights like the Champions League handover last April – when he refused to shake David Bernstein’s hand in response to the FA’s failure to back Fabio Capello in the run-up to his racism case – to remind the world of his standing.

Still, at the time, the once unthinkable notion that Terry would not end his career at Chelsea and seamlessly continue into their coaching set-up seemed a near-certainty.

The fears that gripped the Chelsea boardroom after Manchester City’s ambitious £40 million bid in the summer of 2009 had, seemingly, dissipated.

Roman Abramovich – a figure portrayed as having little rationale  – had initially been shrewd in phasing out the old guard: Didier Drogba in 2012, Frank Lampard in 2013, Terry in 2014 and, potentially, Petr Čech in 2015.

Yet with Mourinho’s return, and Lampard’s one-year extension, a sentimental lifeline was handed to Terry.

Far from resting on his laurels, the Chelsea captain has surely earned himself a new contract.

Thus, one cannot help but wonder if England’s chances of bettering yet another second-round finish at World Cup would improve with Terry being deployed alongside Cahill.

After all, while it may seem a step backwards, Hodgson has relied heavily on experienced players in his first XI since taking charge in 2012.

Terry fits that profile and, equally, with Rio Ferdinand having been discarded ahead of Euro 2012 in fear of creating racial cliques in the dressing room, Hodgson has set a precedent for difficult decisions regarding Terry.

However, whether it is respect of Terry’s previous decision to retire, or fear of rejection, it looks like Hodgson will not call on England’s in-form defender ahead of what his last World Cup as England manager.

An England international tournament would not be complete without a saga and having not played for England since September 2012, Terry may well emerge the real winner if England are to disappoint in Brazil.