Chile chipped away at a dogged Swiss defense until Mark Gonzalez found the break through with the only goal of the game. An enthralling match with chances and cards aplenty, there was no shortage of Talking Points as Kevyn Doran reports. 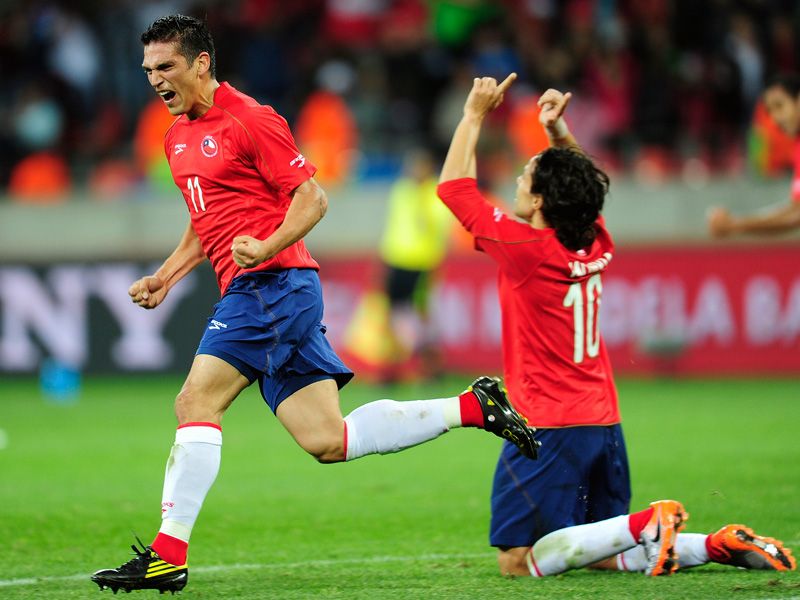 We all expected this game to be the relentless attacking force that is Marcelo Bielsa’s Chile attempting to break down the steel-infused Swiss defence of Ottmar Hitzfeld, but I don’t think any of us imagined the extent to which this game would be one-sided. An incredibly harsh red card to West Ham’s Valon Behrami – more on that later – played a huge role in deciding this intriguing match up. Chile, who have been dubbed the most exciting team to watch this summer, were always going to find it tough to get past a Swiss defence which had not conceded a goal in its previous five World Cup games, but a numerical disadvantage forced Hitzfeld to change things with captain Alexender Frei being the sacrificial lamb to make way. While Roger Federer mounted a comeback of epic proportions against South American opposition over at Wimbledon, his compatriots could not overcome a rampant Chile side who go into the last round of group matches top of their group. We at BackPageFootball.com were slightly disappointed not to see Marcelo Bielsa’s infamous 3-3-1-3 last week against Honduras. Instead, we were presented with a slightly altered version, with Arturo Vidal filling in at left back to form a more conventional back four in a 4-1-2-3 formation. Whether that was down to only needing two centre-backs against the lone striker in Carlos Pavon or a slight sense of hesitance with it being the opening game of their campaign we will never know, but Bielsa reverted to type today against what was initially a two man partnership in the Swiss attack. Gary Medel, Waldo Ponce and Gonzalo Jara formed a seemingly solid back three that only faced it’s first real test in the 90th minute, when Derdiyok spurned a glorious opportunity to snatch a point for the Swiss. Carlos Carmona occupied his usual holding role in front of the defense, with Rodrigo Millar making way to allow Vidal and Isla to form a central midfield partnership rather than their full-back roles of last week, albeit one with plenty of license to drift into wide positions for both attacking and defensive situations. Mati Fernandez occupied his usual trequartista role, but looked a little off the pace as did last week’s goalscorer Jean Beausejour out left. Alexis Sanchez was his usual livewire self, while the returning Humberto Suazo looked to be still carrying the effects of the injury that has interrupted the start to his campaign. We could not help but chuckle at Suazo picking up a booking after just 2 minutes – there’s nothing like making up for lost time, right? Both Suazo and Beausejour made way for Jorge Valdivia and Mark Gonzalez respectively, and Chile looked far more threatening as a result, albeit suffering from the same lack of cutting edge in front of goal as they did last week which could ultimately cost them a place in the last 16. 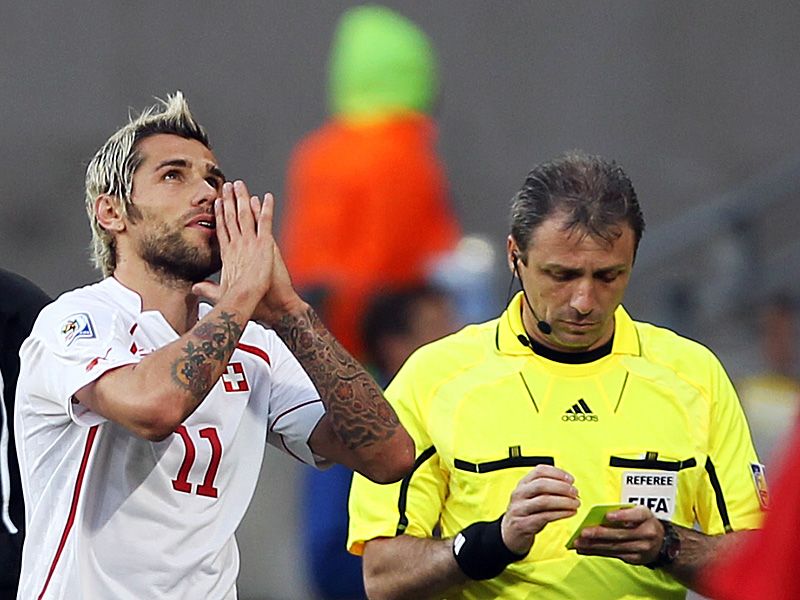 Unfortunately, as proceedings have progressed in South Africa this summer, so have numerous referees’ intentions to make a name for themselves. We saw it in Serbia’s 1-0 victory over Germany a few days ago and in Brazil’s disposal of Ivory Coast last night and sadly, we witnessed it once again this afternoon. It wasn’t so much that Khalil Al Ghamdi didn’t have control over this game, it was more a case of him having too much control as he flashed cards at every given opportunity. Nine yellow cards and one red card were shown as a result, and it really prohibited this game from having any sense of fluidity or natural flow. The players themselves do not escape the blame either. Chile have been known to commit cynical fouls to allow their players to get back in position to avoid being caught on the break. They did it against Honduras last week, and they did it again today with Carlos Carmona in particular being guilty of such an offence. Carmona, along with Mati Fernandez, will now miss Chile’s showdown with Spain next week as a result – a match which could still see them crashing out of the World Cup should other results not go their way. It was also embarrassing to see Arturo Vidal do his utmost to ensure Behrami saw red for a flailing elbow, while Tranquillo Barnetta attempted a similar act following a confrontation with Gary Medel. One redeeming act of competence from the match referee however was a booking for Valdivia when he flung himself to the ground in an attempt to win a penalty, having ran the ball wide of the post in the second half. Al Ghamdi should be applauded for that if nothing else.

Congratulations must go to Switzerland on setting a new World Cup record, becoming the team who have gone the longest without conceding a goal in World Cup history until Gonzalez struck late on. It’s a remarkable achievement for Hitzfeld’s side considering the teams they have shut out have included France, South Korea, Togo, Spain and Chile. That record will be scant consolation for their manager however, as the Swiss must beat Honduras to work towards ensuring qualification. Meanwhile, Chile will advance should they get anything from Spain on Friday, or should Vicente Del Bosque’s side fail to pick up three points against Honduras later this evening.