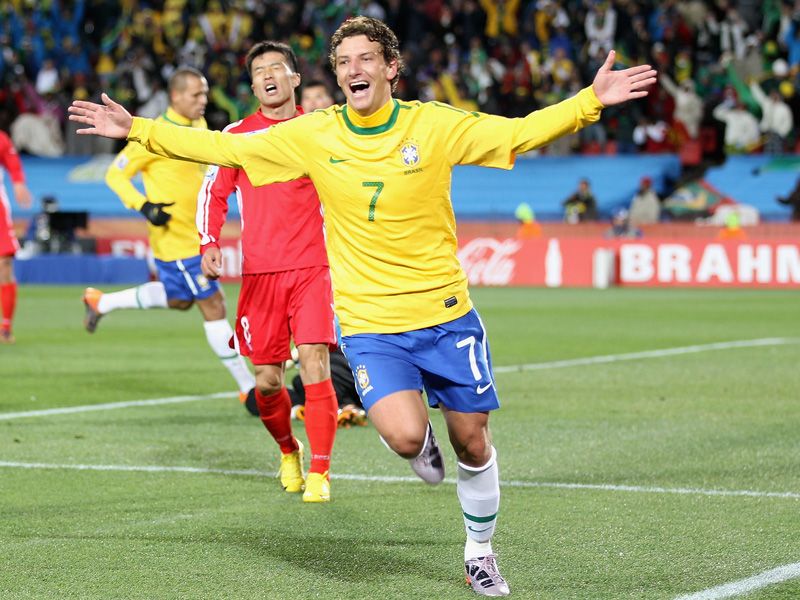 Kudos to North Korea, they have won themselves millions of fans the world over with their performance against Brazil tonight. They defended with the steely discipline you expect from the Germans and Italians, against one of the ouright favourites in Brazil to win the World Cup this summer. A second-string England side lost to a similar Brazilian line-up back in Novemeber but came nowhere near to winning the plaudits that Kim Jong-Hun’s side will have won tonight. You get the feeling that it could have been a historic result for the Koreans – a result to rival their victory over Italy back in 1966 – had they been playing a lethargic Portugal side instead, but a narrow defeat against one of the world’s top teams will have given them a confidence boost to equal that of most victories. It’s often said that games balanced on a knife-edge are decided by either an individual error or a moment of inspiration. Indeed, both scenarios unfolded tonight as Korean ‘keeper Ri Myong-Guk found himself in no man’s land for Maicon’s attempted pull back from the by-line. Whether the wantaway Inter right back meant it or not is another thing, but Myong-Guk should have dealt with it and his side’s confidence took a huge blow thereafter. If Brazil’s opener was fortunate, their second was brilliant. A divine pass from a rejuvenated Robinho split the Korean defence and Elano finished with the utmost precision. Perhaps realising they had nothing to lose, North Korea pushed forward towards the end, and part full-back/part centre back Ji Yun Nam will not be begrudged his historic goal.

2. Not your typical backs-to-the-wall performance When the draw for Group G was made back in December, most of us expected North Korea to be the token whipping boys of the World Cup. How uneducated we were. Korea are a disciplined team who religiously stick to their game plan. Korea never looked like scoring from anything other than a quick breakaway while the scores were tied. Their fullbacks rarely passed the halfway line, with creativity being the duty of Hong Jong-Yo in a trequartista role behind the emphatic Jong Tae-Se. When in possession of the ball, Korea switched from a defensive 5-3-1-1 to an ever so slightly less defensive 5-2-2-1 with Mun In-Guk pushing up to share a supportive role with Jong-Yo. As such, Korea offered very little threat from wide positions, and the majority of their attacks came through the impressive Tae-Se who justified his growing reputation in world football. The Wayne Rooney of North Korea – as he has been dubbed – caused problems for a very experienced Brazilian centre back pairing of Lucio and Juan, showing great awareness and control with body strength beyond what his meagre frame suggests. You get the feeling some of Europe’s aspiring higher-tier teams will have taken notice. An Yong-Hak occupied a Javier Mascherano-like holding role, albeit one without as much movement, but it was his presence which prevented Kaka from linking up with those around him. As we’ve already said, Korea stand more of a chance of getting something out of their clashes with Portugal and Ivory Coast, assuming they stick with the same defensive approach. Expect Jun-Il and Yun-Nam to double up on Cristiano Ronaldo in an attempt to frustrate Carlos Queiroz’s side while Portugal struggle to create chances in much the same way as they struggled today. As mentioned it took a fortunate strike from Maicon to break the deadlock in the 55th minute. We don’t believe for one second that he meant it, but a stroke of luck was just about the only way Brazil looked like taking the lead despite their dominance in possession. A flat back five from the Korean defence frustrated Brazil no end in the first half, with Kaka and Robinho beind identified as the danger men. While the former found it tough in the face of constant attention from the Korean back line, the more skilful and innovative Robinho ran riot. The (still) Man City man seems to be enjoying his football once again, and was in top form tonight providing the first real joga bonita-style entertainment the fans in South Africa had looked forward to. His sublime pass for Brazil’s second was proof that the 26-year old offers final product, something fellow hype-machine Cristiano Ronaldo failed to deliver earlier today with a paltry successful pass completion rate of just 59%. Fabiano was on his own up top, but not shy of support from Robinho and Elano. Maicon and Bastos had free reign on the wings as Korea’s only wide players – their full backs Jun-Il and Jong-Hyok – offer very little going forward and as a result, the Brazilian full-backs can relax their defensive responsibilities.

4. No room for politics

Never before have I been so happy to separate a country’s footballing identity from it’s political reputation. Rumours were flying around that this match would not be televised back in North Korea, which we really hope are not true because it would be a crying shame for this team not to be celebrated. Adrian Chiles said it best (shudder) when he said that never has a team been allowed the right to be as proud of a defeat as North Korea can be tonight. They have served their country a greater service than many of their multi-millionaire diplomats, and we can offer them nothing but applause and the utmost respect for their achievements.