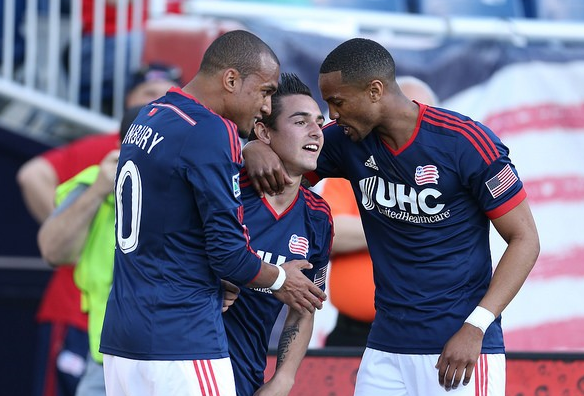 The free-scoring New England Revolution are sitting pretty at the top of Major League Soccer’s Eastern Conference after netting five goals in consecutive games for the first time in their history.

The Philadelphia Union, whose coach John Hackworth has come in for serious criticism lately, were the Revs’ latest victims in a 5-3 thriller at PPL Park on Saturday.

He’s not wrong, and the Revs now average 1.73 goals per game, a figure that is second to only the Chicago Fire (1.9 goals per game) in the east.

There were five different goal scorers against the Union as New England followed up the resounding 5-0 win over the highly fancied Seattle Sounders a week earlier.

“We’re setting each other up. It’s really coming down to some individual play as well.”

Now unbeaten in ten games, the Revs have recovered from a sluggish 1-3-1 start to the season, and the three points picked up against the Sounders in such convincing fashion made people sit up and take note of their progress.

One of the key factors in the recent run has been the form of young striker Patrick Mullins who has seized his opportunity to lead the line with both hands.

The 22-year-old was a standout performer at college level, with 47 goals and 35 assists in 92 career matches at Maryland.

Before that though, Mullins and his family had endured some difficult times as they were forced to relocate following the Hurricane Katrina disaster that devastated New Orleans in 2007.

“Hurricane Katrina was definitely a difficult time for me and my family, and lots of other families in New Orleans,” Mullins told Goal USA.

“In terms of soccer, it showed me I should cherish the game, every moment, every day that I was able to play, because there was a time when I couldn’t play, when there were a lot greater issues at hand.”

In January this year, Mullins was chosen by the Revs as the 11th pick in the MLS SuperDraft and has scored three goals in four starts since breaking into the team.

Fellow youngster Diego Fagundez, who we profiled last year, has also been in great form lately as his stock continues to rise.

Still only 19, Fagundez enjoyed a breakout year in 2013 and scored 13 times in the 30 games he played between the regular season and the playoffs where the Revs lost out to Supporters’ Shield Champions the New York Red Bulls.

It has taken some time for Fagundez to get going this time round but three goals in the wins over the Sounders and the Union suggests that he is now in full swing.

“I’m feeling a little confidence and it’s nice I could score one today and get an assist, but as long as the team is scoring. It’s not all about one person,” he said after the Philadelphia game.

“There’s 11 guys that we’re playing. I think this is getting our confidence going for the next game.”

A quick word of acknowledgement needs to go to forward Teal Bunbury who has been an ever-present in the team since making the switch from Sporting Kansas City.

The 24-year-old had big shoes to fill given he was billed as a direct replacement for Juan Agudelo, the star striker who is now a free agent after a proposed move to Stoke City failed due to work permit issues.

Bunbury scored the opener as the Revs beat his former team 2-0 in April but has been proven to be far more dynamic than just a goal scorer in the team.

The Revs were one of Major League Soccer’s powerhouses just a few years ago as they made three MLS Cup finals between 2005 and 2007, though they lost all of them.

While a trip to the showpiece game in 2014 is still a long way off, the Revs have at least given themselves a really good platform on which to build.