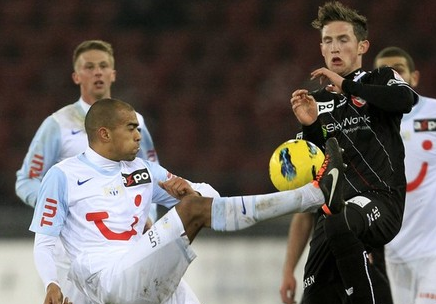 Recent events suggest that the Swiss Super League, the country’s highest division, is struggling to live up to its name. The league’s 2011-12 season has been plagued by financial crises as well as protests from both fans and clubs.

The biggest disaster, though, has been the bankruptcy of Neuchâtel Xamax, two-time Super League winners. As a result of the club’s consistent financial difficulties, the Swiss Football Association has expelled Xamax from the Super League mid-season, and demoted it to the 2. Liga – the Swiss fourth tier – for the 2012-13 season.

In the first half of the season, Xamax had amassed 26 points in 18 games and were in a comfortable fourth place in the ten-team league. However, Xamax had their license revoked on 18 January 2012 after failing to provide the necessary financial documents and guarantees. Just eight days later the club officially announced their bankruptcy amid claims from ESPN that Neuchâtel were “suspected of falsifying a bank document produced as a financial guarantee last year” – the apparently forged document was said to contain basic spelling and grammar mistakes as the club desparately tried to cover up their problems.

Xamax’s chairman, Russian businessman Bulat Chagaev, must be cursing his decision to take over the club in May. What followed has been the most turbulent 12 months in the club’s history, and Chagaev’s public humiliation doesn’t end there – shortly after Xamax’s bankruptcy was announced, he was arrested for “financial mismanagement” and is suspected to be responsible for a large part of the club’s debts of at least $8.7 million. Guilty or not, the Russian was clearly not cut out for football – he had already sacked four coaches in just nine months.

While Chagaev attempts to clear his name and avoid prosecution, the rest of the club has battled bravely on. A poll on Xamax’s official website asks “How are you willing to help rebuild Xamax?” – unfortunately for the willing volunteers, 10% of supporters say they don’t want to help at all. They have seen their club lurch from one disaster to the next, and even dedicated, loyal fans will eventually decide enough is enough.

It is a sad fall from grace for the Stade de la Maladière side, whose former players include the Senegalese pair of current West Ham midfielder Papa Bouba Diop and ex-Wigan striker Henri Camara, as well as Swiss defender Stephane Henchoz, who enjoyed a six-year spell at Liverpool between 1999 and 2005.

As if Xamax’s troubles weren’t enough, the Swiss FA has also had to deal with troublesome side FC Sion. The club have ignored a FIFA-sanctioned transfer embargo to sign six players this season, and have made no attempt to hide this, fielding ineligible players in no fewer than 12 matches this season.  The Swiss FA have responded with a huge 36 point deduction, leaving Sion bottom of the table with little hope of staying up. The scale of the points deduction is best highlighted by the fact that without the 36-point penalty, Sion would be second in the table, challenging for the title.

Even fans of teams at the top of the league still have reason to be unhappy. Second-placed Luzern have been troubled by fan protest over the club’s banning of flags in its Swissporarena ground. Luzern fans responded by remaining silent during home matches, creating an eerie atmosphere that forced the club to back-track on its decision and re-allow fans to wield flags during games. This isn’t the first time Luzern supporters have made their feelings felt – after a 2010 clash with Basel was rescheduled to avoid a clash with a Roger Federer match, both sets of fans threw thousands of tennis balls on to the pitch to delay the game and make sure the events overlapped anyway.

Although this season has been particularly turbulent for the Swiss FA, the Super League has a history of issues, especially financial ones. Lausanne-Sport were relegated to the fourth division in 2003 after going bankrupt, and like Xamax, Servette dropped out of the Super League mid-season in 2005.

Despite returning to the top flight this season, Servette’s financial worries have reappeared: December 2011 reports suggested that the club was unable to pay players’ wages, and in February 2012 Servette filed for bankruptcy once more.

The Swiss FA’s punishments may look severe, but with FIFA threatening to expel the country’s clubs from European competitions unless action was taken, the Swiss governing body had little choice. As Sion said in a club statement following their points deduction: “This decision is an intolerable attack on fairness in sport but comes as no surprise to the club which did not expect any courage on the part of the ASF in the face of FIFA”.

For a league that has slipped down the FIFA coefficient rankings in recent years, resulting in the loss of its second Champions League place, the Super League could really have done without these problems. Until something changes, Swiss clubs will continue to break the rules and enter bankruptcy with alarming regularity. It is not a sustainable situation.