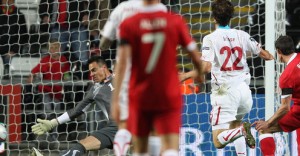 Switzerland’s Euro 2012 hopes diminished on Friday night after losing 2 – 0 to Wales at Swansea City’s Liberty Stadium. The Welsh team, who have recently enjoyed an outstanding turn around in form after appointing Gary Speed as manager, it is mathematically impossible for Wales to qualify for Euro 2012. A win against Bulgaria in midweek however, will take the Welsh side to 3rd in their group table, something a year ago would have seemed unlikely. Switzerland cannot qualify for Euro 2012 after Montenegro’s late equalizer with England, which came after the final whistle for Wales v Switzerland. A cruel way to leave the competition.

Switzerland played the majority of the second half with ten men after Reto Ziegler’s harsh dismissal in the 55th minute, the sending off came after Ziegler’s clumbsy challenge on Chris Gunter alerted Dutch referee (and supermarket owner!) Bjorn Kuipers, who pulled out a red card. Despite playing with an obvious advantage, Wales were quite obviously the better side for the 90 minutes, enjoying the majority of possession and out-passing the Swiss players. Wales’ domination finally affected the scoreline in the second half after Timm Klose brought down Chris Gunter in the 71st minute, Gunter, who had run clear of the Swiss defence, was looking likely to score before being brought down. Arsenal’s Aaron Ramsey stepped up to take the Welsh side into the lead, much to the distress of the large travelling Swiss support.

Switzerland, who were unbeaten in their previous seven matches, did not ever look like coming back after conceding their first goal, with most of their chances on goal being wide and relatively weak.

Despite suffering from seven injuries, the Wales squad featured nine players who ply their trade in the Barclays Premier League, Swansea City’s very own Joe Allen made his first International appearance in the tie. Allen showed a great amount of skill in the first half, out-playing the Swiss defence and breaking free only to hit the ball into Diego Benaglio’s gloves. Cardiff City’s Darcy Blake looked close to breaking the deadlock in the eighth minute, after he managed to misplace a header from a wonderful Craig Bellamy volley.

With Bellamy, Ramsey and Bale all in top form, Wales looked threatening every time they got the ball, pushing the ball forward. One such chance saw Craig Bellamy receive a beautifully aimed pass from Ashley Williams, the Liverpool midfielder controlled the ball with his chest in style before cutting inside the Swiss defence and planting a right-footed strike a little wide of the away side’s goal.

The home side’s best opportunity of the first fourty five saw Chris Gunter’s diagonal pass fall to Morison who planted the shot brilliantly at Benaglio, who was incredibly lucky to save the Norwich striker’s effort.

Although few and far between, Switzerland has a fair few chances of their own, Stephan Lichtsteiner of Juventus fame, crossed the ball to Fabian Frei, who headed the ball narrowly over the Welsh crossbar. Another promising Swiss shot came just before the break after captain Gokhan Inler drilled a low effort at the home net and, much to the joy of the 12,000 strong home support, scraping past the right goalpost. 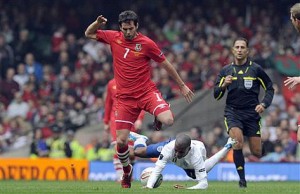 The second half proved to be just as exciting as the first, with Kuipers refusing Gareth Bale a penalty after he was taken down by Valon Behrami in the box, three minutes later saw Ziegler’s dismissal for a late challenge on Chris Gunter. The foul came after Joe Allen’s pass fell to Chris Gunter, who ran through the right-hand side of the penalty area and was clipped by Close after his attempt to cut inside of the Swiss defender. The incident was a stone cold penalty and Kuipers had no choice but to award a penalty, which Aaron Ramsey hit home with ease.

Wales continued to be dominant for the remainder of the game and their second of the night came 19 minutes before the end, Tottenham’s star striker Gareth Bale received a generous pass from Morison before effortlessly running towards Benaglio in the Swiss goal and passing it into the back of the net to seal Switzerland’s Euro 2012 fate. An outstanding performance from an impressive Welsh side, sadly the same cannot be said for Switzerland, who now have no hopes of qualifying regardless of if they win in midweek.