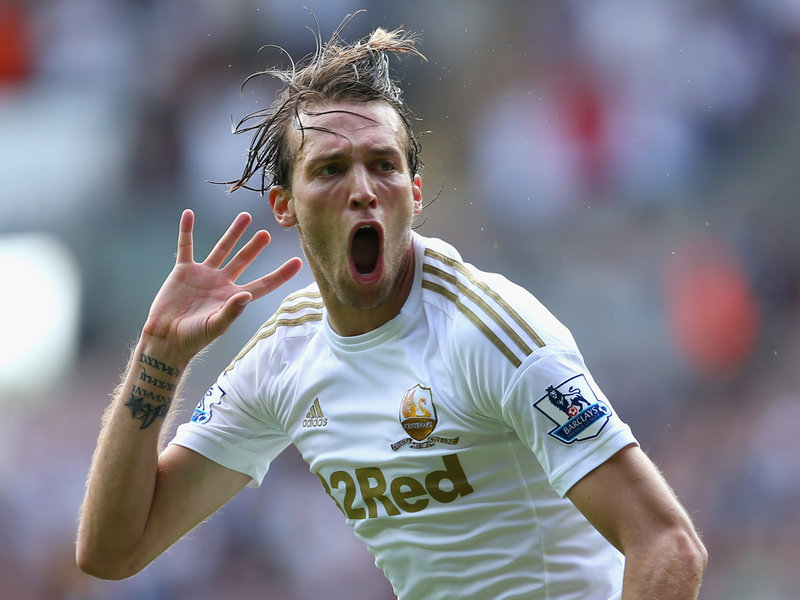 Ten years ago, Swansea City saw in the New Year with a 3-2 defeat to Bury before going down 3-1 against York City. These results extended the club’s losing streak to six matches and they were rooted bottom of the football league. Their existence in professional football was saved only on the last day of the season amid financial uncertainty which was ended when Tony Petty bought the club for £1.

Fast-forward to 2013; the club are establishing themselves in the top half of the Premiership and are 90 minutes away from the League Cup final. They currently lead the European Champions 2-0 on aggregate, after emerging victorious from Stamford Bridge for the first time in 87 years. Swansea’s fan can quite rightly be pinching themselves.

The club’s ambition can be traced back to that turning point in 2003. They acquired the services of a 20-year-old midfielder who had been informed by West Ham that he would never make it as a Premiership player. A decade on, and Leon Britton is still the heartbeat of the most vibrant side in the country. Alan Tate too, a Manchester United prospect who didn’t quite make the grade, stayed loyal to Swansea through their meteoric rise through the divisions. Vision and foresight were the key ingredients for the re-emergence of the Welsh club, one which was helped by ex-player and former manger Roberto Martinez.

Martinez captained Swansea to promotion to England’s third tier in 2005, and managed them to that title three years later. His Spanish influence meant the Swans stood out in the lower divisions as they evolved out of the ‘kick and rush’ stereotype that engulfs the football league. He encouraged his side to be influenced by a different culture and to play with a mentality associated closer to the Spanish ‘pass and move’ style. This was fully endorsed by club chairman and lifelong fan Huw Jenkins.

“We had to get away from the typical British 4-4-2 formation and 6ft 2in players who run around a lot”, states Jenkins. “The most important thing is you have to have a clear vision of what you are doing.”

To this, the chairman and his club have inevitably had setbacks. Roberto Martinez’s talents were poached by Wigan Athletic – and his style has been visibly implemented at the Latics too. Paulo Sousa, his replacement, led the club to its highest ever finish – 7th in the Championship – before being tempted by promises of more money at Leicester City. Brendan Rodgers took up the mantle, winning promotion to the promised land of the Premiership but after a commendable 11th-placed finish he took up the vacant managerial post at Liverpool.

These managerial changes didn’t halt the ascendancy, simply because each was specially chosen for sharing the same mentality as Jenkins. None of those appointments were the obvious choices. Martinez was new to management, whilst Sousa had recently been sacked by QPR and Rodgers was not a success at Reading. They were identified as excellent coaches, who favoured possession-based gameplay and who were happy to coach the team, rather than manage the club.

This endears Swansea to many neutrals, as does the club’s supporter’s trust owning 20% of the club – a policy that has worked wonders in Germany but is almost unheard of in Britain. The daring to stand out from the crowd and do things differently is what Swansea’s success has been built upon. Replacing Rodgers with Michael Laudrup took everyone by surprise, but it shouldn’t have done. Jenkins was never going to plump for an obvious candidate, it was always going to be a deviation from the norm. A risk perhaps, but a calculated one that is working wonders.

“We had to go down a different route, to compete with clubs who think spending money is the only way to get success”. Going down a different route, is it any surprise to hear Jenkins use these words? It is a policy which has brought unprecedented success to his club, why fix something that isn’t broken? He is assured and confident in his way of managing the club, and is equally sure-footed about the coaches he entices to south Wales.

Laudrup pulled off the potential signing of the decade when he pinched the Spanish striker Michu from Rayo Vallecano. He has netted an average of two goals every three games since his arrival: a remarkable record by anyone’s standards. A player almost unheard of in the UK, but who Spanish-based journalist Sid Lowe placed in his ‘2011/12 La Liga Team of the Season’. With Messi, Ronaldo, Falcao, Villa, Benzema and Higuain all vying for places, this was quite an accolade. £2 million for such a precious talent was daylight robbery.

Playing the transfer market is another bow in Swansea’s extensive and impressive armoury. A further £2 million was spent this summer on Chico Flores, who despite a sluggish start, has now formed an impregnable central defensive partnership with Welsh captain Ashley Williams. Shifting youth product Joe Allen onto Liverpool for a whopping £15 million and Scott Sinclair to champions Manchester City for £6.2 million were both massive financial coups. On top of the £7 million compensation received for Rodgers, this enabled the Swans make use of Laudrup’s European football knowledge to add depth to their squad.

Pablo Hernandez, a key clog in Valencia’s side, was seen as a bargain replacement for Scott Sinclair. Ki Sung Yeung (Celtic), Dwight Tiendalli (Twente) and Kyle Bartley (Arsenal) all gave the squad strength in depth, whilst loan signing Jonathan De Guzman has been integral in the side’s renewed high-pressing central midfield.

The feel-good environment around the club at the minute shows no signs of slowing down. Plans have been submitted to enlarge the Liberty Stadium from 21,000 to 32,000 to cope with the growing demand for tickets. There is no fear-factor there or any vague notion they are out of their depth. The club are not star struck and possess the belief and assurance in their play.

It’s a club who held a vision that was almost unique, they placed their trust in it and the rewards have been significant. There is still the hurdle of dismissing the Champions of Europe in the return leg, but the Wembley stage would be richly deserved.