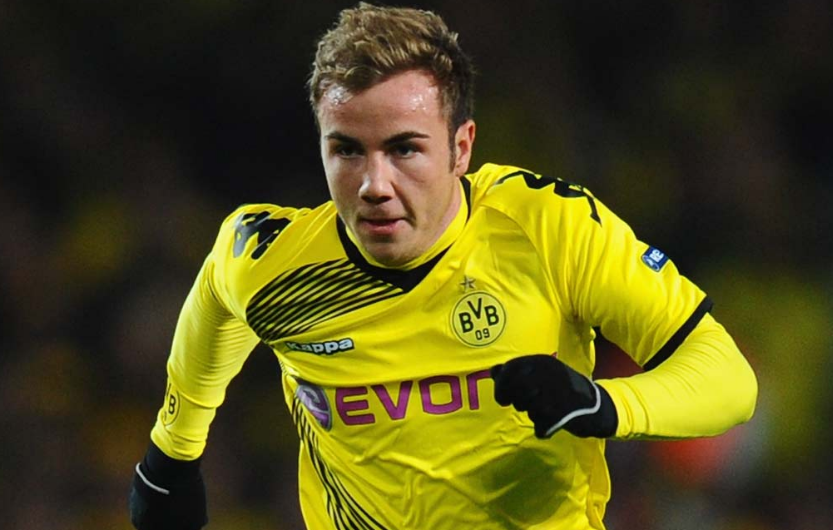 As midfield duos go, there are none better than Dortmund’s Mario Götze and Marco Reus.

Not my words, although I agree with them, but those of Franz Beckenbauer who, having won the World Cup as a player and a manager may just know what he’s on about.

Considering they both play for his rivals as well, it is particularly high praise indeed. But not, however, unjustified.

Given they occupy similar positions on the pitch, and both are very much attacking players, they could perhaps be forgiven for getting in each other’s way every now and then.

However, Reus’ movement, coupled with the intelligence of Götze, means this is very rarely an issue, and their link-up play, interchanging and understanding has developed remarkably in such a short space of time.

Between them they have 19 league goals (Reus 11, Götze 8) and 15 assists (nine and six respectively), meaning they have been directly involved in over half their side’s 62 league goals.

They have also created over 100 chances between them (51 for Reus, 55 for Götze) which makes up almost a third of the entire chances created by the reigning (if not for long) champions.

Given the way Bayern have blown away everyone in the Bundesliga, the impact of Reus’ arrival has perhaps been most evident in the Champions League, where they have finally started to emerge as a genuine force.

The screenshots below show the link-up between Götze and Reus in their last-16 victory over Shakhtar Donetsk, with the duo passing to each other a total of twenty times. 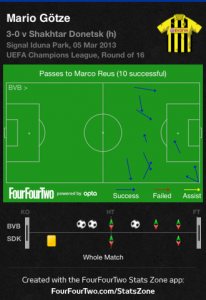 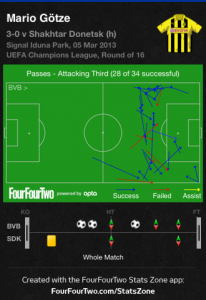 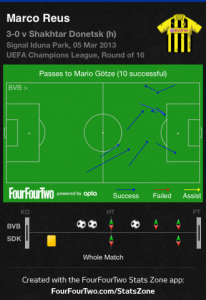 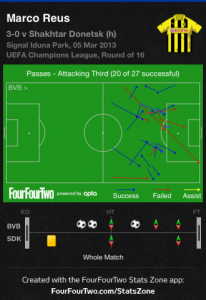 The vast majority of these passes came in the final third, and accounted for a large proportion of each player’s passes in this area. This shows just how much the combination contributes to Dortmund’s overall attacking play. Reus has three Champions League goals to his name this season, while Götze has two along with four assists.

The stats, of course, don’t tell the full story, and the best way to truly understand this partnership is to watch them. Reus is an extremely dynamic player, while Götze is hugely creative and, when he isn’t passing to his teammate, the ball seems glued to his feet.

They certainly speak the same language, although at times the understanding seems mostly telepathic. They have now started to repeat this at international level, with Joachim Löw recently having experimented with using one of the two as a false 9.

This partly comes from a lack of form and fitness of other striking options, but also as a sign of how important he sees it to fit these two players into a team drowning in attacking talent.

The scary thing, of course, is just how much better the two can get. Reus is 23, Götze just 20, so neither play should be anywhere near their peak. This is also their first season playing together, so their understanding is only going to develop further.

It’s often been argued over which of Germany’s wunderkind’s is the best, on an individual basis. The answer, it seems, is both of them together.