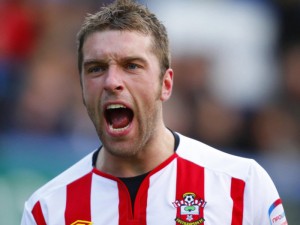 This week, Roy Hodgson surprisingly included Southampton’s Rickie Lambert to his England squad for the forthcoming friendly against Scotland. The call-up rounded off a terrific first Premier League season for the 31 year-old where he found the net 15 times and caps a dramatic rise seemingly unfeasible when released by his first club Blackpool in 2000.

Though Lambert richly deserves to celebrate the honour of an international call-up, spare a thought for one of his previous employers who, in stark contrast, are preparing themselves for life in the Conference North in a fall just as rapid as Lambert’s rise.

Stockport County started the 2008-9 season in League One but since then have fallen into administration and as a consequence, plummeted down the divisions, chopping and changing managers and losing any player that could bring some profits to a beleaguered club. Lambert is not the only former player to have attracted the interest of clubs higher up in the Football League. In an unconventional 3-4-3, here is a Stockport County XI enjoying more success than their previous club.

Many North-West clubs see Stockport as an ideal location to loan some of their young players. John Ruddy had two separate loan spells at County when on the books of Everton. Like Lambert, Ruddy has been called up to the England squad and already boasts one cap, coming on for a half in a friendly versus Italy. He is also rumoured to be a Chelsea transfer target. He may not necessarily view his loan spell with any significance, unlike that of Wolverhampton Wanderers keeper Wayne Hennessey. Hennessey famously set the Football League record for nine successive clean sheets and victories in his 2007 period as a County goalie.

Versatile defender Lee Mair joined Stockport from Dundee and played fourteen times before returning back to Dundee, this time joining Dundee United. He has since won the Scottish League Cup for St Mirren, a team captained by another ex-County player, Jim Goodwin. Staying in Scotland, Celtic’s Fraser Forster also had a spell at Edgeley Park.

Whilst there is an array of ex-Stockport strikers who are still prospering in the football league, it is a little harder to find any defenders of note. Including Swansea’s Garry Monk would really be scraping the barrel considering he only appeared twice just before the turn of the century. Ashley Williams though is a player who, like Lambert, has enjoyed a meteoric rise. Released by West Bromwich Albion, Williams can thank Stockport for resurrecting his career in a period that spanned 162 appearances. Williams captained the team, attaining leadership qualities that have earned him the captaincy of both Swansea and the Welsh national team.

With the North-West being such a popular hub of football heritage and talent, it is understandable that many players play for a variety of teams in the region over their career. Popular destinations for Stockport players include Bury, Rochdale and Oldham Athletic. McNulty arrived from Cheshire rivals Macclesfield Town in 2008 and played a full season before leaving to Brighton alongside teammate Gary Dicker. After an unlucky run of injuries, McNulty now plays for Barnsley.

The other obvious geographical link to Stockport is the two Manchester clubs. It is natural for a player released by one of the Premier League teams to re-locate to Edgeley Park, even George Best managed three appearances for them in 1975! Winger Tommy Rowe made the swap when released by Manchester United in 2002 and went on to succeed at County until a quarter of a million move to Peterborough, where he continues to torment full-backs. His brother Danny also enjoyed a successful spell at County and he is now on trial with Macclesfield.

Whilst it is rare for a former Stockport player to earn an England cap, many an international from the rest of the British Isles have appeared for County, with Northern Ireland’s Jamie Ward and Scotland’s Liam Bridcutt being recent examples. Dependable midfielder, Stephen Gleeson has been rewarded for his consistent performances for MK Dons with two caps for the Republic of Ireland. Gleeson is also typical of the ability for ex-Stockport players to adapt to the demands of the different leagues, with spells in both the Championship and League One, just like Coventry City captain, Carl Baker. Williams’ and Lambert’s ability to ‘rough it’, giving them an unusual edge in the Premier League can be attributed to slogging it out in the lower leagues.

Though famed for being a striker, Lambert was often deployed as a central midfielder in his 98 games for Stockport. Released by Blackpool and purchased from Macclesfield, Lambert was one of the leading lights of a fading team, often blasting in his still well-renowned free-kicks. But, Lambert chose to drop down a division to Rochdale where he became even more prolific and earned himself a move up to Bristol Rovers where similar form was rewarded with a transfer to Southampton.

A premature candidate to this team could be 19 year-old Danny Whitehead who has just signed for West Ham United. Only time will tell if he will make it in the Premier League but this move direct from the Conference North to the Premier League is hugely significant. Lambert definitely had to do that jump in a much more convoluted manner.

Released by both Manchester United and Blackburn Rovers, attacking midfielder Pilkington was signed by Stockport after a hat-trick against FC United of Manchester for Atherton Collieries. He was instrumental in Stockport’s promotion, winning the man of the match performance in the League Two play-off final against Rochdale where he scored one and made another. Pilkington’s ability to both score and assist goals was epitomised by his stats of 17 goals in 80 appearances, which he virtually matched in his two years at next club Huddersfield Town. This form was good enough for Norwich to sign him for £2 million where he has reached the dizzy heights of a call up to the Ireland squad and a winning goal against Manchester United.

The highlight of Stockport’s last ten years, that play-off win against Rochdale interestingly featured Adam Le Fondre on the opponent’s side. Le Fondre had started off at his place of birth, Stockport, but wasn’t really appreciated and sold to Rochdale after 18 goals in 63 appearances. Since his departure, Le Fondre has been prolific for Reading, which is a sobering thought for County fans. Was his transfer misguided or was it just a case that around that time, there was a feeling that Stockport justifiably had others who could do a similarly good job?

Like Le Fondre, Aaron Wilbraham started off at Stockport. Around the time of his breakthrough, 1997, County had enjoyed a run to the semi-finals of the League Cup under the stewardship of Dave Jones and were a consistent Division One (now Championship) side featuring club legends, Brett Angel, Tony Dinning and Alun Armstrong. Wilbraham tasted Premier League action, again with Norwich City, and now lines up alongside Glenn Murray, who appeared 11 times for Stockport, for Crystal Palace.

Many a Welsh international has featured for Stockport at some point. From goalkeepers Paul Jones and Hennessey, to strikers Craig Davies and Jermaine Easter. Easter is a stalwart now of the Championship and has always been able to find the net, without ever securing moves to the Premier League. His eight goals for County in 2005 was rewarded with a transfer to Wycombe Wanderers and then five more clubs until his most recent move to Millwall.

Though hardly an eleven that would strike fear in many top flight opponents, this team is a clear example that Stockport has been a good starting point, or even turning point, for many domestic footballers. Maybe Lambert will reflect upon this when he faces the Scots?

2 thoughts on “Stockport County XI moving on to bigger things”