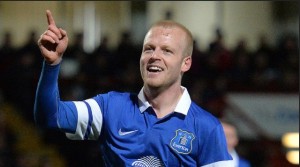 He is the miniature Scot who has made a major splash in the English Premier League, but just as Steven Naismith is used as a striker, could he be used in a deeper role? This could be ideal for him for club and country.

A central winger is a modern-day central attacking midfielder. Instead of staying within his central domain, a central winger will drift out into the wing; hence the name. This unlocks space for fellow attackers and midfielders by dragging defenders out of position.

Naismith fits the mould perfectly: his movement is globally lauded, and he is a mobile, tricky customer for any defender. With the likelihood of Romelu Lukaku departing the Toffees for good, he could be asked to shoulder a more attacking responsibility (playing as the main striker) but would be ideally suited to playing just in behind whoever is found as a replacement for the big Belgian.

With Emenike and Bony two of the rumoured striking targets for Everton it is doubtful that Naismith would be starting up front next season for them. They are both extremely physical players which compliments the little Scot’s game perfectly.

Renowned for his runs made to free up space for teammates, Naismith would be ideally utilised as a central winger behind one of these strikers. Akin to Mesut Özil, he could be used to present decoy movements for opposition defences to deal with. But how does this help Everton?

Many players will benefit: Barkley and his runs from deep and Mirallas at left midfield being just two examples.

Let’s focus on Barkley first. The English wonder kid looks set to grace the bench at this Summer’s World Cup, but he has no such worries for his club side. A regular starter for the Evertonians, he has impressed with his surges from deep.

With Naismith as a central winger, the young Englishman would have even greater opportunity to make this sort of run. Naismith’s movements out left or out right eliminate either a covering central midfielder or a centre half from the attacking equation. Man marking requires at least one of them to stay with him: they follow him to the wing.

This means either one central midfielder is out of position already or, more likely in this situation, one must cover at centre back for their teammate. There is now only one midfielder to cover both Barkley and his midfield partner (probably McCarthy) therefore the seemingly tireless young gun is free to move up to support the attack or collect the ball himself and do what he does best. Drive at the defence.

Kevin Mirallas is a prime example of a modern-day “wrong-footed winger”. Comfortable with both feet but more skilled with his right, the mercurial Belgian plays on the left side of the midfield. This has many advantages, but is best suited to playing alongside someone with Naismith’s key qualities: movement being of most importance.

With Naismith dropping out to the left-wing from his central area, Mirallas would have license to cut inside on to his favoured right foot. We all know the devastating effect of such an occurrence. The central player trusted with covering or marking Naismith would have to run with him ( this alone frees up space in the centre).

The only problem now is the whereabouts of the right-back. Could they be marking Mirallas? The truth is it is a possibility, but with Naismith’s run in behind him comes the added responsibility of closing off that option to Mirallas. This means he must stand off him, give him time . That is a bad idea when faced with someone of the Belgian’s pace and skill.

Mirallas would cut inside and be free to take a shot, play the striker through, attempt a reverse ball to Naismith, pick out the run of Barkley. Naismith’s inclusion as a central winger unleashes all sorts of potential problems for the opposition.

This, a fairly brief summary of just a few key tactical advantages of Naismith being used as a central winger, highlights his potential. It is an important decision for Martinez: should we waste Naismith’s talent on the bench? Or should we play to his strengths as a central winger? Put like that it sounds a fairly simple one.