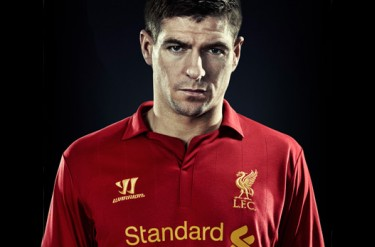 Although some may hate to admit it, the Liverpool skipper’s career is in danger of going out with a whimper. As 2012 drew to a close, even the club’s League Cup triumph in February could not hide the unwavering air of disappointment around Anfield as the team continues to linger around the lower fringes of the Premier League table. But expectations remain sky-high and the fans demand success – Gerrard knows this more than anyone. Just three years ago he was one of the most feared names in world football.

England’s failure to qualify for Euro 2008 only seemed to compound the Scouser’s hunger for success, leading to arguably his most outstanding club season to date, with 24 goals and 11 assists as the reds finished 2nd and he was voted in the FIFA World XI for a third consecutive year. Since then, there has been a reversal of fortunes and his role in the England national team has taken on added importance. Before the recent Sweden friendly when he earned his 100th cap, the captain and centurion was asked to reflect on his career so far. “I would rate myself as a six or seven [out of 10],” he said. “In football, hero and legend status get given out far too easily. As far as playing for England goes, there are maybe 14 or 15 heroes. The rest haven’t really delivered.” As captain for club and country he knows the criteria for greatness. However, if the past twelve months are any indication, his tale is destined to be a mixed bag.

Despite Gerrard’s best efforts last summer, he couldn’t stop Euro 2012 from becoming a rather predictable affair. His three assists earned him a place in the UEFA Team of the Tournament although it was hollow comfort for the routine quarterfinal exit on penalties, this time to Italy who beat the Germans for the eighth successive time in a major competition. Meanwhile, the favourites from Spain performed their role to the world with ease. Gerrard can curse his luck as he watched old teammates Fernando Torres, Xabi Alonso and Álvaro Arbeloa glide to victory in Kiev. El Niño picked up the Golden Boot award soon after his Champions League and FA Cup medals with Chelsea, while in May the Real Madrid pair won their first La Liga title since leaving Merseyside in quick succession during the summer of 2009. Their achievements serve to highlight Gerrard’s loyalty to Liverpool, but also reveal the imperfections which have been all too visible throughout his long career. At 32, Gerrard has rarely played in a team of equally world-class players. He has often been the lone superstar dominating the field and carrying the burden for others. He’s been the best; he’s played against the best – but never for them. His numerous appearances in FIFA and UEFA dream teams over the years only emphasise the true reality.

Approaching the twilight of his playing career, Gerrard’s relative lack of silverware overlooks his dominating influence on the 21st century of English football. Liverpool’s brief but vivid flashes of success since 2000 will forever be associated with the fundamental part he played in each of them. His 5 goals in the club’s seven major cup final victories during that time appear to contradict the criticisms directed at him from some fans who believe that he doesn’t turn up for the big occasions. He has been labelled as a stubborn soloist and tactically ignorant, but to the watching neutrals these are in fact his greatest qualities.

He is the embodiment of football from the hardened English playground, frantically charging around like a hyperactive child running on impulse. In his heyday he would provoke jokes of disbelief from his opponents. After Gerrard played at the Riverside Stadium in 2005, Middlesbrough’s Gareth Southgate recalled: “We were just laughing in the dressing room that at one stage we thought he was heading his own crosses in.” Regardless, the match ended 0-0 and goes some way towards explaining Liverpool’s prolonged lack of goal-scoring quality and overreliance on individuality. Presumably this is why Brendan Rodgers was brought in and what he must now change. American owners Fenway Sports Group have demanded the selfless style of passing football seen at Swansea City last season, along with a squad mentality founded on equality and teamwork. Under this new regime Gerrard has a chance to lessen his grip on Liverpool’s rudder, but whether he chooses to do so is another question.

In an era when loyalty is barely existent, even history can’t stay still for long. Last summer the National Football Museum began its new life in Manchester after less than ten years housed at Preston’s Deepdale Stadium, in a move that epitomises the sport’s 21st century journey to the masses. One staple of the exhibition is the ‘English Football Hall of Fame’, which recently celebrated its tenth anniversary. Although originally a languid American import, the Hall of Fame concept is one that European soccer is slowly starting to embrace. Away from all the tribal forum debate and YouTube squabbling, the walls of the Urbis Centre provide clarification beyond doubt of the game’s greatest players. Here they will be remembered in similar company, and here is where Steven Gerrard is likely to end up soon enough. Outside Deepdale, a statue of Sir Tom Finney sliding in the mud pays tribute to the local plumber who spent his entire career at Preston North End between 1946 and 1960. Regarded as one of the best players England has ever produced, Finney never won a major trophy but his exceptional ability and loyalty to club and country is still appreciated today. In the Hall of Fame you’ll find similar one-club heroes such as Jimmy Armfield, Nat Lofthouse, Jack Charlton, Tony Adams and Billy Wright – each part of an increasingly rare breed within the beautiful game. By not joining Chelsea in 2005 Gerrard surrendered a chance of sustained success, but in doing so, Liverpool’s prodigal son could join an evermore-exclusive elite.

For a club with such a rich history as Liverpool, it’s astonishing to imagine that perhaps its greatest ever player has had no part in it. Gerrard didn’t play under Shankly, Paisley or Fagan.  He hasn’t yet won the league, let alone seven in nine years or four European Cups during the same golden age. The 1978 team that conquered Europe back-to-back was inducted into the Hall of Fame in 2008, the starting line-up rolling off the tongue like a Willy Russell monologue. For Gerrard, he will most likely be the sole inductee from this era, with many of his teammates disappearing to the forgotten corridors of history. Such is the unforgiving nature of time. However, it may be in retirement when Gerrard can finally gain recognition from those outside the walls of Anfield, and be respected for his contribution to the sport irrespective of the red shirt he once wore.

2013 will be Steven Gerrard’s 15th year in the professional game, every one as a Liverpool player. However disappointingly he may view his time playing for England, such doubts are all but absent from his club career. The 2014 World Cup in Brazil is likely to be his last ambition with the Three Lions, but for Liverpool his targets are less straightforward. Since that memorable season after Euro 2008, the Premier League title dream has long since faded and been replaced with confusion. Will Liverpool continue to fight with the middleweights until the day he hangs up his boots, and will the World Cup once again end in misery? As captain for club and country, the legacies of both teams are in a state of anxiety under his stewardship. Gerrard’s 3 goals for Liverpool during December have compelled Rodgers into promising a contract renewal within the coming months, so his future at the club appears to be safe until 2016. The clock may be ticking on his playing days, but as his story has revealed so far, it’s been far from predictable. In what is already a glittering career, it could be his greatest achievement to lead Liverpool and England to glory before going out on a spectacular high. Truth be told, it would be unlike him to do otherwise.

2 thoughts on “Steven Gerrard: A legacy under threat”