Following Manchester United and Manchester City’s failure to reach the knockout stages of the Champion’s League and Arsenal’s heavy defeat to AC Milan in the second round, people have been quick to question the strength of the Premier League.

With Arsenal all but out of the competition, if a stuttering Chelsea side fail to get past Napoli it will be the first time since the 95/96 season that an English club hasn’t reached the quarter-finals. Although the pessimism has largely been dismissed as an overreaction, does this still reflect a league in decline?

It has been correctly pointed out that the Champions League only represents a small portion of the Premier League, and that in the last few seasons England’s top division has become more competitive and stronger as a whole. However, it is still impossible not to judge a league’s quality by the performance of its teams in Europe’s premier club competition. At present it is widely accepted that the appearance of clubs in the latter stages of the Champions League indicates the strength of their domestic leagues.

However, there are flaws to this analysis. Ultimately the Champions League is a cup competition, at least at the business end, and therefore teams’ performances are not as adequately rewarded as a league season. To use the old adage ‘form is temporary, class is permanent’, if a league measures class, a cup rewards form. That is not to say that the best team never wins the cup, as Barcelona have shown in recent years, but few would genuinely argue that 2004 finalists Porto and Monaco were the best two sides in Europe. Both AC Milan and Liverpool have won the competition in recent years without even being the best side in their domestic league. Therefore to simply count the number of sides that progress in the competition is a little simplistic and does not reflect the true quality of the clubs and the leagues that they represent.

Secondly, a glance at the top performing clubs in the competition cannot really indicate the quality of their domestic rivals. As already mentioned, to use the Champions League at all only gives an idea of the quality of the top sides in each division anyway, and to then only record the progress of the most successful team(s) ignores the performances of other clubs from the same nation. Should Barcelona and Real Madrid contest this year’s final shouldn’t we also take into account the performances of Valencia and Villarreal, both eliminated at the group stage, before making a judgement on La Liga’s quality?

A better way to consider the strength of a division in relation to Champions League performance would be to analyse teams’ game-by-game results. By awarding results points as they would be in a league format, clubs’ performances can be measured on a points-per-game basis.  These results can then be averaged across their home nations to represent each domestic league. The statistics may be slightly distorted by clubs resting playing towards the end of the group stage or playing for a draw to advance in the knock-out rounds, but in general they should offer a decent guide to the divisional performance.

The graph below shows the points-per-game achieved by clubs from the five major European leagues (England, France, Germany, Italy and Spain) in the last ten Champions League seasons: 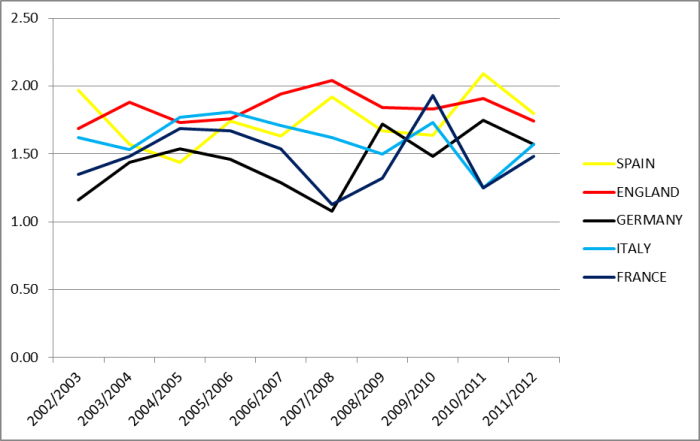 Since 2002, the Premier League’s strength is evident by the fact that they have consistently averaged well above 1.5 points-per-game, suggesting English teams win approximately half of their games in the competition. This is reflected by the fact that in recent years three or four Premier League clubs have routinely reached the quarter-finals. It may surprise some to see that in the current season English teams are only marginally behind Spain and still some way ahead of the performances from German, Italian and French teams.

What this really shows is that despite the early exits of the Manchester clubs, neither team were exactly outclassed. United only lost once, and their failure to advance had more to do with a lack of focus than a lack of ability. City were drawn in a tough group, yet still managed three wins and a draw. Chelsea and Arsenal both won half of their group games and suffered only one defeat apiece, making a total of only five defeats for English clubs in the group stage. Compare this to the four Spanish clubs who lost a total of eight times, with Villarreal beaten in all six group games. The Italians only had three teams in the group stage, after Udinese failed to advance from the qualifying round, and still managed four defeats between them, while Germany and France’s three teams totalled seven and six losses respectively.

So even if English clubs don’t make the latter stages of the competition this season they are still getting results in the competition, even if it hasn’t been enough to see them advance. However, Arsenal’s heavy defeat to AC Milan may raise the next question of competitiveness with other major clubs. Victories against teams from minor leagues in the group stages could easily distort the usefulness of the statistics, just as defeats may be blamed on complacency. To remove these factors, the following graph shows the average points-per-game achieved against teams from within the five biggest European leagues: 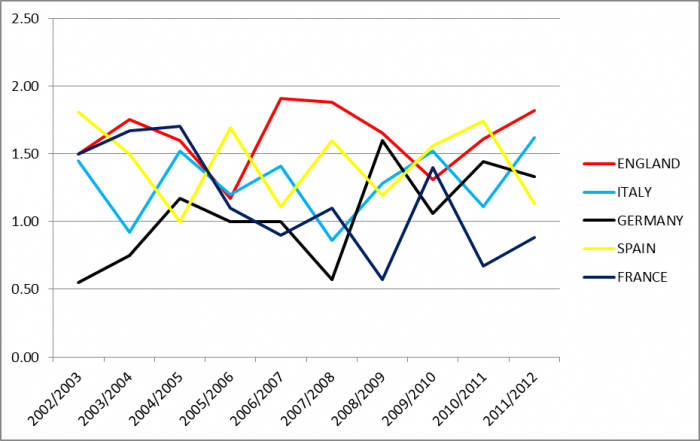 Points-per-game in the Champions League against major league teams

Again the Premier League fares well throughout the period, and this season their results are actually superior to other nations. Even including Arsenal’s second round defeat, English teams have earned 31 points from 17 games against major opposition. In fact, they have performed better against supposedly stronger opposition than in the competition as a whole, which would again suggest an element of complacency rather than lack of quality. Manchester United did not even face a side from another major league and still finished third in their group, yet few would genuinely suggest that Benfica and Basel are superior sides.

Spain’s current performance drops off considerably reflecting the fact that Villarreal and Valencia have taken just four points from ten games against major rivals. Whatever the strengths of Barcelona and Real Madrid, such statistics cannot be ignored and demonstrate the disparity between the top two Spanish sides and their league rivals. Italian and German clubs have fared well in comparison to previous years, although French clubs have struggled.

Ultimately these results compare the clubs as a collective, rather than individually. Both Barcelona and Real Madrid qualified from their groups undefeated, whilst Bayern Munich were only beaten having already qualified (and resting half of their first team). In the graphs above their performances have been diluted by the performances of their compatriots. If the English clubs have failed to match these standards this season, then that is nothing to be ashamed of. But it would also be true to say this hasn’t been a true reflection of the best of the Premier League. Chelsea and Arsenal are both very much in transition, just as Bayern and Madrid were only a few years ago. Manchester United have hardly had a vintage season, and yet are far stronger than their European performances would testify. Finally, Manchester City couldn’t, or weren’t allowed to, transfer their league form into the Champions League, but have often played at a level that would challenge Europe’s best. Whatever happens this season, few would dismiss the chances of English clubs in years to come.