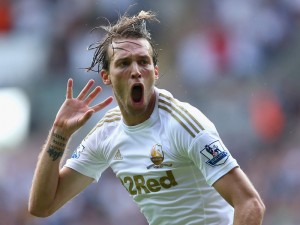 The Spanish Armada has sailed at Swansea City, less with all guns blazing,  more a capitulation of sorts. For a club built upon the possession game, Swansea manager Garry Monk has shown little sentiment in putting his own stamp on his side.

In doing so the Spanish core, on which the very foundation of the football club has recently been partially built upon, has been totally decimated in recent weeks. Gone are Pablo Hernandez, Michu, Álvaro Vázquez, Alejandro Pozuelo and Chico Flores, whilst José Cañas is on the verge of a move back to Spain.

With last season came reports of training room altercations between the Iberian contingent and the long running members of the squad. It somewhat marred and underpinned the difficulties of integrating foreign players into British football and the robust work ethic needed to remain in top flight football.

In part, at least, it may have contributed to Swansea’s dangerous flirtation with relegation, and they eventually just kept the chasing pack at arm’s length. It showed the limitations of the players Michael Laudrup brought in and Monk inherited.

What of the former Spanish contingent? Hernandez on his day can be unplayable – creative, intelligent in the use of the ball, quick and dynamic. His season was beset by injury and those qualities were never truly reflected on the consistent basis that his £5.5 million price tag warranted.

It was a similar story for the enigma that Michu turned into last season. He was hot property a year ago, even earning a call up by Spain, however that was as good as it got in a Swansea shirt. A second call up never materialised. Disillusioned with British football, his move to Napoli was no surprise. No longer was he indispensable and eventually, with fatal inevitability, he turned into a weak link, way short of the player that electrified in his debut season.

In part, Michu was frustrated and lacking in drive. He was certainly showing all the signs of wanting away from the club. It’s grossly infuriating watching a player of his undoubted quality slide into a quagmire, which try as he might was struggling to get himself out of. In those situations you truly see the character of a player. For Swansea fans who demand commitment and passion it was a bitter pill to swallow.

Cañas and Pozuelo never truly settled in Swansea nor had the quality required to cope with the rigours of the Premier League. Flores’ departure will be a blow, despite his tempestuous nature, the flair for the dramatic and his commitment (sometimes overly) to the cause. Flores created a formidable central defensive partnership with Ashley Williams. In the law of averages he did more good than harm, and his letter to the Swansea fan base following his departure showed his fondness for the club and a no little  measure of class.

Given the departures, many have suggested Swansea will be a shell of the side that burst into the Premier League four seasons ago. With the loss of so many first team members, can the brand of football that has become the norm be maintained with such a strong influence removed from the core of the club? Can Swansea deify the doubters once more?

Monk has brought in quality players that suit Swansea’s style in the guise of Jefferson Montero, Gylfi Suigurdsson and Batafembi Gomis. There is more variation in the side. In addition, with the acquisition of World Cup runner-up Federico Fernandez and the possible arrivals of Benjamin Stambouli from Montpellier and Nice defender Timothée Kolodziejczak, there is no questioning the potential quality that Swansea may have on their books.

Like any work of artistry, patience and diligence are required. Monk does have the latter in spades and given the build up play that Swansea possess, the former has become very much part of the DNA of the club; where every single player knows what is demanded of him, where the attacking  possession game is the norm rather than the exception.

Critically important is the formidable strike partnership of Gomis and Bony. Some pundits and fans alike don’t believe they can play together. This is not the case. Gomis has great awareness and poise on the ball and dropping him into a slightly deeper role will unsettle defences. Monk will have on occasion a real quandary of which striker to sacrifice to get a result, if plan A does not work.

It is essential to maintain a solid defensive formation to stick with a flat back four, while also allowing Neil Taylor and Angel Rangel free licence to support the wingers. In addition to providing adequate cover and shape, it also prevents the susceptibility of being caught on the counter-attack. Swansea do have the luxury of having Leon Britton on their books – vastly underrated for his work ethic, tracking and vision, and providing extra cover for the defence. Utilising him to distribute the ball onto his more advanced midfielders means he is very much a crucial cog in the Swansea machine, almost its beating heart.

In midfield, Swansea have – in recent memory at least –  adopted the idea that width is important not only to stretch defences but to draw defenders out of their positions, in turn creating space. Under Monk there is no reason why this should change, nor even evolve under him. A combination of Dyer, Montero and Routledge on the flanks supported by Sigurdsson, Ki or Shelvey in the heart of the midfield, accompanied with Britton dropping into a deeper role offering a link between the defence and midfield, could provide the balance needed.

Onto the forwards, and there are two clear options here. Dropping Bony into a deeper attacking role just in advance of the midfield could not only bring the wingers into play but utilise his strength and cutting passes. Given the pace of Gomis, Swansea could very well put the Frenchman in behind defences, or even interchange the duo to even more unsettle opposition defences. It’s very much a good headache for Monk to have and opposition defenders will undoubtedly know they have been in a battle.

So it is very much possible for the same brand of football to be played and given the quality Monk has brought in, it seems very much a stronger Swansea outfit, with the possibility of three more arrivals before the transfer window slams shut.

Some have already written off Swansea’s chances of staying in the Premier League. To be frank, they have been doing so ever since the Liberty Stadium outfit got there. Robbie Savage take note! Shipping out eight first team players is always a risky strategy, given they form an integral part of the team. However, managers can lose a dressing room, as Michael Laudrup seemingly did at the end of his tenure, and clubs can have want-away players on their books, eroding the work ethic of the collective.

With a few more reinforcements in key areas, Swansea do have the sufficient quality to survive and to continue to thrive; despite what the fans who had a near meltdown following the 3-0 friendly loss to CF Villarreal may think.