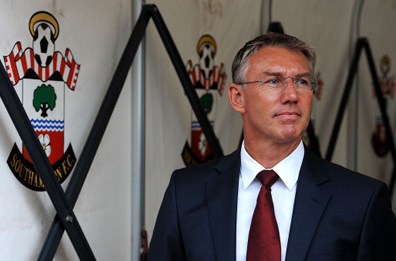 It can be a brutal game football.

For 88 minutes on a Sunday afternoon, Southampton, promoted twice in as many seasons, managed by a former physiotherapist at Scunthorpe, were doing far more than holding their own against the global behemoth that is Manchester United. The south coast side had been tenacious and eager in their defensive duties, creative and diligent in possession, particularly the 17-year-old midfielder James Ward-Prowse, and were fully deserving of their 2-1 lead, given to them by a pair of headers from messrs Lambert and Schneiderlin.

However, just as their supporters dared to dream of a first three points in the Premier League since their relegation back in 2005, a United side who had been under-par and flat all afternoon, brought about echoes of that famous night at Camp Nou, with two late goals from their £24m summer signing, Robin van Persie. His 92nd minute winner, the dagger in the side for the Saints, who having performed admirably in matches against both of last seasons top two, have nothing to show from their first three matches back in the big time.

Three games played, zero points on the board.

Whilst there are many admirable qualities about the way Southampton boss Nigel Adkins has his side going about their business – the style of play, the inventive interchanging of positions, the dexterity of the likes of Jason Puncheon and Adam Lallana to move into space between the lines (something which should be further enhanced by the arrival of Uruguayan Gaston Ramirez from Bologna) – the lack of defensive nous, and the inability to even make an effort of shutting the game down was nothing short of startling; to call it schoolboy would be an understatement.

With five minutes remaining, with a 2-1 lead and having seen their opponents squander an awful attempt at a ‘Panenka’ penalty, the Saints supporters were cheering every touch from each member of their side, who had unquestionably put in a magnificent collective performance to that point.

However, what should have been a massive worry – especially against a side with a reputation for scoring late goals as often as United –  is that Adkins side were every bit as open as they had been all afternoon, and likewise in their previous two Premier League matches. The swashbuckling full-backs Nathaniel Clyne and Danny Fox were still stationed high on their respective touchlines, the centre-backs, Jos Hooiveld and Jose Fonte, continued to split to take the ball from their goalkeeper. Additionally, throw-ins were quickly returned into play and they continued to attempt to attack their more heralded opponents, seemingly looking for a killer third goal, rather than the alternative; to shut up shop, to waste time, to run the clock down, to make niggling fouls to stop counter attacks and to hold on to victory.

It seems to have become a dirty term in recent times to call a side professional, to say that they have seen a game out. But it is something that all sides who strive for success – whatever that means to them – know how to do. Jose Mourinho sides have long been masters at it, whilst Spain over the past four years have turned it into an art-form. Being able to manage games effectively during the final stages, helps a side to pick up wins and, crucially, points. Nonetheless, as at the Etihad Stadium a fortnight ago, it is an area in which, once again, Southampton have been found lacking.

Should the Saints prove unable to learn how to see games out, then they will struggle to retain their Premier League status come the end of the season, regardless of how eye-catching and pleasing their actual performances are. Neutrals may really enjoy watching them play, and may well root for their gung-ho approach. But making friends is one thing. Survival, the clubs sole aim this season, is another. And in the battle-hardened playground that is the Premier League, come the end of the season, there aren’t any extra points handed out for aesthetics.

6 thoughts on “Southampton may appeal to the neutral, but must adapt to survive”