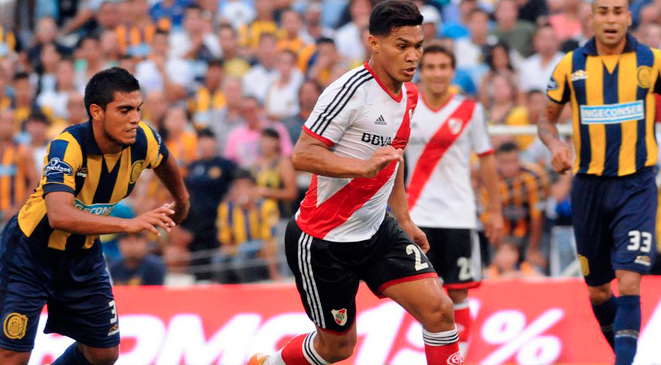 San Lorenzo were probably still hungover from celebrating their first ever Copa Libertadores title when they walked into the Estadio Juan Domingo Perón on Sunday to face Racing, where they were welcomed back to Argentinian league play with a sobering 2-0 defeat after goals from Luciano Lollo and Facundo Castillion put an official end to the party.

Racing are two-for-two in the league to start the season, and currently sit top of the table with six points, ahead of Velez Sarsfield on goal differential.

The other notable match from Argentina last weekend saw River Plate take on Rosario Central, with River taking all three points at home behind goals from Teó Gutiérrez and Leonardo Pisculichi, as the defending champions currently sit in fourth on four points. Éder Balanta did not feature, as speculation continues to swirl around whether he will depart for Europe before the closing of the transfer window. As of right now, the frontrunners are Galatasaray and Roma, who could look to bring in the young Colombian if Mehdi Benatia is sold.

Meanwhile, over in Brazil, Cruzeiro remained top of the table with a 3-0 win over Santos, but Internacional continue to nip at their heels as a 0-1 win vs Goiás sees them remain just two points behind the leaders on 31 points.

The race for the title remains very close at the top as we approach the halfway mark of the season, with Cruzeiro, Internacional and Corinthians all within five points of each other.

An interesting transfer rumour that came out yesterday was that Cruzeiro midfielder Lucas Silva is reportedly a target for Tottenham, Chelsea, Manchester United and Atletico Madrid. The player is still only 21, and probably not yet ready to play in the Premier League, but is a name to keep in mind for future transfer windows.

In Chile, Universidad de Chile dropped their first points of the season to Deportes Iquique after a 2-2 draw, but remain at the top of the table on 13 points after five games, a point above Santiago Wanderers.

Wanderers picked up all three points in their derby match against Universidad Católica, where new boss Julio Falcioni is off to a dreadful start, collecting only six points from their first five games and is already well on the hot seat as these type of performances just don’t cut it when you’re in charge of one of the biggest clubs in the country.

Colo-Colo got back to winning ways with a 2-0 victory against Unión Española, and are up to third in the table on 10 points. Hector Tapia’s men have been far from inspiring, though, and look in need of implanting some youthful energy into a starting XI that is aging.

Perhaps the biggest surprise of the season so far is O’Higgins. After the departure of the excellent Eduardo Berizzo to Celta Vigo, expectations were set fairly low but former Fulham forward Facundo Sava has O’Higgins up to fifth in the league tied with Colo Colo and Huachipato on 10 points after demolishing Cobreloa 4-1 over the weekend.

Freelance writer for hire based in the US. South America, MLS, English Premier League