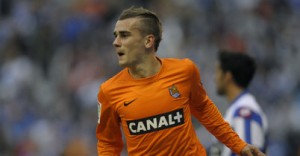 The end of this current football season throws up yet another irony. In a story akin to Bayern Munich and Jupp Heynckes, Real Sociedad allowed Philippe Montanier’s contract to run down, and he proceeded to deliver a fourth placed finish in La Liga. Champions League qualification represents ‘La Real’s’ best finish in ten years. They did it playing a terrific brand of football, mixing short, incisive passing with quick counter attacks.

A 1-0 win over Deportivo La Coruña clinched fourth spot, and also consigned ‘Depor’ to the Segunda División. Antoine Griezmann’s lone strike was enough for the Basque club and they fully deserved fourth spot for their consistency over the second half of the season. Griezmann, Imanol Agirretxe and Carlos Vela have formed a potent attacking axis. The veteran Xabi Prieto also deserves much praise, particularly for the vital goals he scored against Real Madrid last week, which kept Sociedad in contention.

It should be noted that they needed a helping hand from Sevilla, after Álvaro Negredo’s four goal performance in a 4-3 win over Valencia dropped ‘Los Che’ into the Europa League. The result will have given Unai Emery some satisfaction, after his departure from the Mestalla last summer. The grim reality for Valencia is that their perilous financial situation leaves the club at a crossroads. Without the funds to redevelop the Mestalla, they will likely be forced to sell their best players to secure the future of the club. David Villa, David Silva and Juan Mata have departed in recent years and Roberto Soldado, Adil Rami, Éver Banega and Jonas could make the club a big profit.

It begs the question though. How long can Valencia continue to sell their prized assets and still remain competitive at the top end of the La Liga conversation? Ernesto Valverde has a task to try keep the majority of the side together, while selling their best couple of players and also trying to pinch young players from around the country. Valencia’s scouting system is superb and they usually sign wisely. The touted stadium redevelopment is becoming a massive hurdle though, one which they do well to scale.