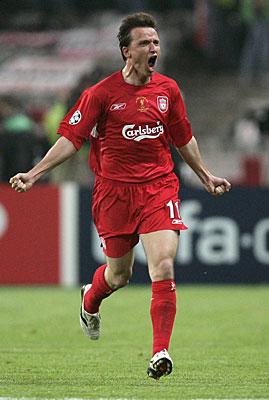 Former Liverpool and Slavia Prague midfielder Vladimir Smicer has been appointed the new manager of the Czech Republic just a day after announcing his retirement from playing.

The Champions League winner was confirmed in the role by a statement issued on the official website of the Czech Football Federation and he will now travel with the squad for a tournament in the United Arab Emirates.

He will work as a joint manager alongside Mikal Bilek who was appointed to the role last month.

Smicer said the decision to retire from playing was not an easy one.

“My mind and heart would love to carry on, but my body is against it,” he told sport.cz.

“I still feel some pain in the knee and cannot play at 100 per cent, so it makes no sense to torture myself and my team-mates.

“The best moment of my career? That has to be the Champions League triumph with Liverpool.

“But even the transfer to Liverpool alone or my first professional contract with Slavia have been my childhood dreams come true.”

The 36 year old was a member of the Czech side that finished as runners up to Germany at Euro ’96 and was capped 81 times overall.