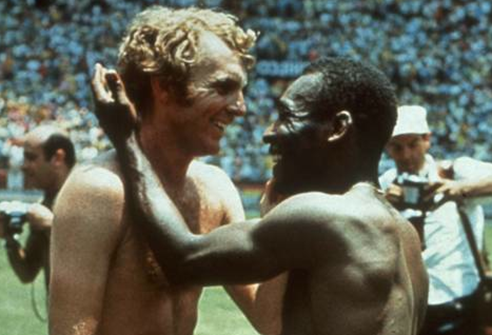 So there we have it, a mere 1094 days since the first qualification fixture, the details of the 2014 World cup have been finalised. And from now till the opening fixture – 189 days if you were wondering – anticipation is only going to increase to fever pitch. Wall charts will be given pride of place on bedroom walls, TV schedules will be forensically examined, squads will be debated.

England’s fans will go into this tournament with a well-deserved sense of trepidation – the nation was steady, if not spectacular, in qualification – and even the mainstream media, so often the pre-tellers of so much unrealised glory in the past, have endorsed a new era of sensible expectations.

But the new era of austerity football does not mean England fans, like any other nation, are banned from the excitement – and with that in mind, to whet your whistles in anticipation, here are six of some of England’s most memorable World Cup matches.

Yeah, yeah ’66 – Hurst, Russian linesman, people on the pitch – and all that. Yet, as is the case with so many World cups, the final’s preceding fixtures often provide much more satisfying spectacles. And in North London that evening, 95,000 were treated to a true spectacle. A game free from the pressure a final brings – Bobby Charlton’s two goals hallmarking a classic display, whilst Eusebio for Portugal, with an air of effortless finesse pushed England right to the final whistle.

In modern footballing terms, a match that has ‘everything’ is often one which is speckled with controversy – a red card, a penalty, bad tackles, a plethora of goals – and as we will see later on those ingredients can result in a classic game. But this group game, marked by a solitary goal, perhaps represents football in its purest form. A game of chess between the world’s top two sides – with the two kings, Moore and Pele, imperious. 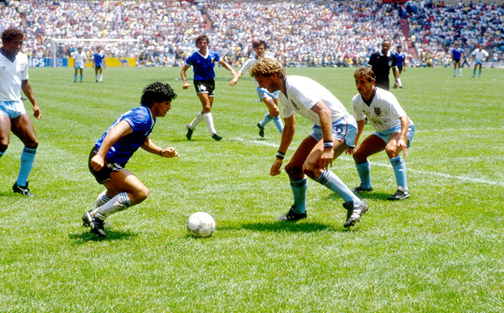 Those in Estadio Azteca that day must have thought the action they were witnessing were the result of some sun induced hallucination. Even those watching on television could be forgiven a cartoonish rub of the eyes to try and quantify the scenes the 2nd half provided. Diego Maradona conspiring with heaven to hand Argentina the lead and then, providing a goal so devilishly perfect in its execution that one would suspect witchcraft. England did not take it lying down – throwing Hoddle, Barnes and the
kitchen sink at the Argentine goal but it was not enough.

Perhaps the greatest story to take from Italia 90 is that of Cameroon. Their swash-buckling attack, lead by 38-year old Roger Milla the perfect tonic for a World Cup dominated by tactical draws and cynical defending. Cameroon announced themselves in the opening game against Argentina and went on to win the group. Despite this England, with probably the best squad in 20 years, were expected to win comfortably. Cameroon didn’t just ignore the script; they threw it into an industrial wood chipper. A comprehensively outplayed England were saved by two Lineker penalties, yet in truth were lucky to win an enthralling encounter. 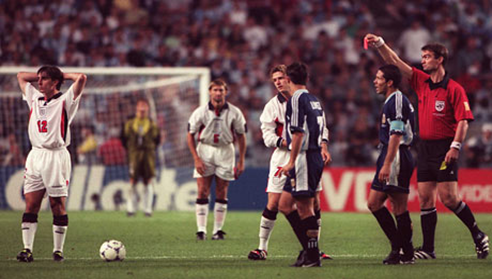 As mentioned above, if England’s 1970 fixture against Brazil represented everything a purist loves about the game, then this balmy night in Southern France provided a spectacle somewhat from the dark side. Yes there were moments of astonishing footballing beauty – Michael Owen’s slalom through the Argentine defence to signal his arrival on the world stage and Argentina’s cunning training ground set-piece to equalize. But the real memorable moments were born out of football’s dark side – diving, elbows, penalties and of course a petulant flick of the boot from young David Beckham. If 1970 was marquis of Queensbury rules then this was a street fight.

The special World Cup moments, the ones we all remember, seem to have an element of pre-determination about them. The personal victories of Pele and Maradona, France winning on home soil, Ronaldo’s redemption in 2002 – those narratives heighten the excitement and drama we as fans feel at a world cup. No other nation has such a rich World Cup History with England as Argentina – from 1966 all the way through to 1998. So the group game at Sapporo’s spaceship/ indoor stadium was already loaded with historical significance. And in captain David Beckham the narrative had its hero – a player who had pulled himself up from the depths of despair since the last time England met the Argentines. Full redemption was within grasp. With a penalty drilled straight down the middle Beckham seized it. Destiny? Perhaps.

Who knows what destiny awaits England in Brazil this summer. One thing is for certain with England – it’s never boring.

Have you always dreamed about seeing the World Cup live? Well, thanks to Ticketbis, this dream could finally come true! Ticketbis has a range of World Cup tickets, so make sure you get your hands on some before they sell out!