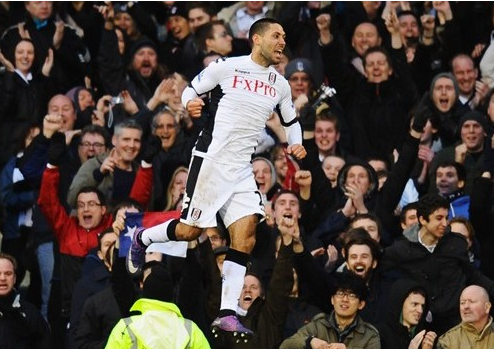 Clint Dempsey is enjoying his best season in the Premier League for Fulham with sixteen goals so far.

Injuries to Pavel Pogrebnyak and Andrew Johnson have seen Dempsey start up front in the Cottagers’ last two matches and he hasn’t disappointed. The American has scored three goals as a striker and Fulham have taken four points in the process.

So should Dempsey be starting up front for Fulham on a regular basis?

How Clint Dempsey operates in the Fulham midfield

When Fulham have Pavel Pogrebnyak and/or Andrew Johnson fit, then Clint Dempsey is deployed in a left sided midfield role, but is free to come in from the flank.

When i broke down the game of  Pavel Pogrebnyak, we saw how much Fulham use Damien Duff to launch their attacks from the right. What this means is that Clint Dempsey drifts in to the centre when Fulham have the ball in order to create an overload. This leaves John Arne Riise to attack down the left wing pretty much on his own.

If we take a look at a couple of recent Fulham matches where Clint Dempsey was playing in his usual midfield role, we can see just how much he comes infield.

In the five goal mauling of Wolves a few weeks ago, Dempsey (23) has an average position in front of the central midfielders, Moussa Dembele (30) and Danny Murphy (13).

This leaves John Arne Riise (3) to bomb down the left when needed, but Fulham launched 40% of their attacks down the right and 31% through the middle in the game.

Clint Dempsey gets the ball in two main areas, just over the halfway line in the inside left channel as the play builds. Then, as the ball goes out to Damien Duff,  Dempsey then moves in to a more central area outside the box looking for the ball to come back.

If we also look at the home game against Swansea, Fulham have a slightly different line-up, but the movement of Clint Dempsey remains the same. The Cottagers go with Pavel Pogrebnyak and Andrew Johnson up front again, but Bryan Ruiz replaces Damien Duff on the right side.

Whereas Damien Duff plays wide as a proper winger, Bryan Ruiz makes Fulham narrower, as he also likes to move inside. We can see this from an average position map, just how much he comes inside to directly support the strikers.

In the game against Wolves, Fulham heavily attacked down the right. With Bryan Ruiz making them narrower, the majority of their attacks against Bolton come up the centre (43%).

Although the formation has slightly altered, Clint Dempsey still comes inside off of his left flank, which is why the Fulham attack comes from the centre.

Dempsey still receives the ball in the same areas though, just over the halfway line in the inside left channel and then just outside the opposition area in a central location.

Without Damien Duff, the attack comes from the middle and this time the ball goes through Moussa Dembele, who sprays passes from his central midfield role. Eleven of his 45 completed passes (25%) are to Clint Dempsey.

.
How Clint Dempsey operates up front for Fulham

Since Pavel Pogrebnyak was injured, Clint Dempsey has had to step in to the fold as the team’s main striker. He has done this before, but in his last two outings leading the line, he has shown a real centre forward’s touch up front.

Against Bolton, Dempsey’s two goals inspired Fulham to their first away win since edging QPR 1-0 at the end of February.

With Dempsey starting as a lone striker, Fulham installed Damien Duff back on the right and employed a central trio of Diarra (19), Dembele (30) and Ruiz (11). This again has the effect of weighting Fulham’s attacks down the central and right-hand sides of the pitch, leaving John Arne Riise (3) to launch forays down the left.

We saw that when in midfield, Clint Dempsey likes to drift in from his left sided position to influence the play.

Now up front, he still operates in the area just outside the opposition box like before, but can now also drop in on the right side just over the halfway line as the play develops on this flank.

With Fulham heavily going down the middle and right flank to attack Bolton, Moussa Dembele and Damien Duff again try to find Dempsey with every opportunity.

After Clint Dempsey scored his first from firing in a free-kick, it is this trio that combines for his second goal.

The ball starts out on the right with Moussa Dembele (30), who exchanges passes with Damien Duff (16). Dembele is then able to move forward with the ball and Duff can advance up the wing and receive the return on the edge of the box. Duff is now isolated one-on-one with the full-back and able to beat his man in order to dig out a cross to an unmarked Dempsey at the back post.

In Fulham’s last match with Chelsea, Martin Jol again tinkered with the line-up. Damien Duff remained on the right, but Kerim Frei came in on the left, a move that gave more balance to the left side of the Fulham attack.

With Frei operating down the left, Fulham still attacked the most down the centre, but now slightly favoured this flank. This stat is misleading though, as Frei actually tries to get the ball back in to the centre at pretty much every opportunity. The majority of his passes are aimed at moving the ball back through the middle to Moussa Dembele and to get the ball right.

As at Bolton, Fulham can then attack through the middle with Moussa Dembele feeding Clint Dempsey. They can also get the ball out to Damien Duff to do the same from the right.

Clint Dempsey again receives the ball in his preferred areas – just over the halfway line in the build up play, then just outside the box when the attack has developed.

Again, Dempsey’s goal comes from the right hand side, but this time it is from a corner supplied by Damien Duff.

Should Clint Dempsey be starting up front for Fulham?

With three goals in his last two games, the argument is there that Clint Dempsey could offer Fulham more in attack than midfield.

With Pavel Pogrebnyak due to return from injury, the Russian will be installed back in the central striking role and Dempsey will return to his natural midfield position. However, Pogrebnyak is only under contract until the summer and Andrew Johnson also rumoured to be on the move at the end of the season. If both leave, then Fulham will be without a recognised centre forward.

The form of Clint Dempsey up front for Fulham, may have given manager Martin Jol some food for thought.