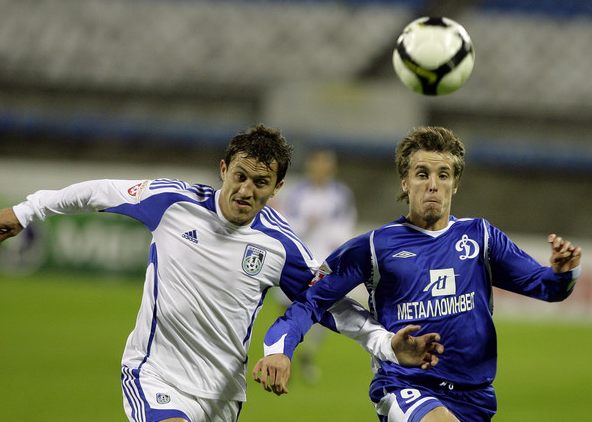 On the bank of the Kotorosl River – a tributary of the Volga – sits one of Russian architecture’s finest feats. The St John the Baptist church was initially erected in 1671 however it was not until 1687 that the entire exterior of the building was deemed as being complete. This huge scale of design and construction may have been a costly, time consuming process however as one views its fifteen onion domed spiers it is clear that some things are simply worth the problems that you may face along the way.

The maintaining of the St John the Baptist church is something that is not nearly as close to being replicated in the case of Yaroslavl’s most prominent football club, Shinnik. The club’s recent domestic history has been beset by a distinct lack of financial muscle which has ultimately resulted in a somewhat inconsistent league position.

Upon their promotion to the Premier League in 2001 Shinnik were seemingly comfortable in their new, illustrious surroundings. After two seasons out of the top division it seemed that the club were ready to compete and their 6th placed finish in 2002 – followed by 5th and 6th finishes in the two following seasons – simply compounded this notion. However the inconsistencies of the past caught up with the club as they were relegated in 2006 after a catastrophic season.

Despite spending another season in the Premier League in 2008 Shinnik have ultimately fallen into a period of disrepair. Despite their relatively solid mid table results of the past couple of seasons there has been a gradual decline in the level of financial backing that the club has been receiving – which is now coming to a very worrying conclusion.

A recent dispute has come to the fore between Shinnik and a New Zealand based company known as Bestmax ltd. The issue stems from the transfer of Ukrainian defender Dmytro Semochko whose move from Luch-Energiya Vladivostok to Shinnik in 2008 was dealt with by Bestmax – who were representing the player as his agent.

The problem that now exists between the two parties relates to the amount of money that was agreed to be paid to Bestmax due to their role in the transfer proceedings. The New Zealand based company believe that they should have been paid a figure in the region of 8.5m rubles – roughly £190,000 – however it is claimed that Shinnik have thus far only paid a minuscule percentage of this figure. The lack of payment has seen Bestmax take legal action against the club and this week both parties were in the Arbitration Court of Yaroslavl battling out their differences.

It may seem like a relatively standard proceeding, in which the club will inevitably be forced to back down into paying the remainder of their owings, however with Bestmax not being a registered agency it is possible that Shinnik could worm their way out of trouble. However despite this, precedent will most likely work against the club as Rostov found themselves in a similar situation – again with Bestmax – when they were ordered to pay the outstanding 30 million rubles owed for the transfer of Dmitri Akimov.

The problems that Shinnik presently face have been placed at the door of the club’s former director Vladimir Shepel – who negotiated the terms of the deal. Shepel’s departure from the club soon after Semochko’s arrival spelled trouble for both the club and their former director as some of his previous dealings came under the microscope and through which his reputation has been greatly tarnished.

For Shinnik any potential order from the Yaroslavl courts that they must pay Bestmax the remainder of their fee could ultimately put the future of the club under great jeopardy. As it presently stands the financial plight of the club has already been well documented and further unexpected payments could well tip the club’s books ever closer to bankruptcy. Should the club be unable to muster the necessary funds from Robin Hood type investors then the sale of assets – through bankruptcy – would be the most likely scenario.

It seems incredulous that a club should be on the brink of extinction thanks to the transfer of a footballer who featured in a grand total of 27 matches for them. Semochko’s time with Shinnik would not be one that you could classify as being a success and yet his former club are still being made to pay for the trail he has left behind him. However it is impossible to blame the player for the financial mismanagement of a football club and it is a saddening reality that without an influx of private ownership then Russian football clubs are consistently going to find themselves flirting with the brink of disaster. For Shinnik, however, the St John the Baptist church provides a visual reminder that solid foundations provide the basis for longevity and this is a lesson they must take into the future.