A peach of a goal from Jamie Doyle after four minutes set the tone for what was a comfortable victory against the Boynesiders.

Gavin Boyne added a second from close range on 16 minutes which ensured that Drogheda had it all to do to claim at least a point before heading back up the M1.

However, the three points were safely secured by Shelbourne after Doyle got his second goal of the game with a strike from inside the box after some excellent work by both James English and Lorcan Shannon. 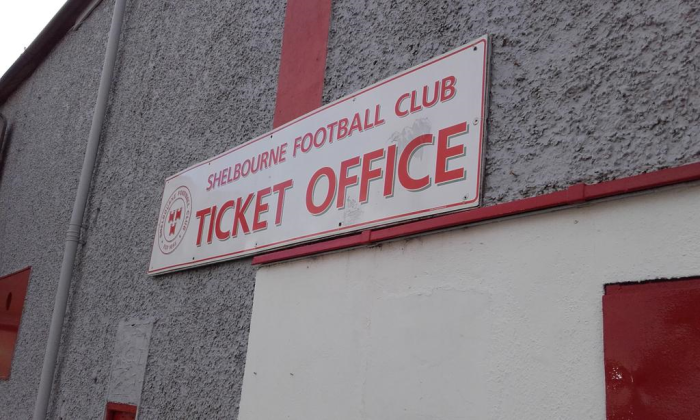 After a scrappy opening few minutes where both teams were guilty of giving away possession too easily, Shels opened the scoring on four minutes with a contender for goal of the season.

Jamie Doyle received the ball from Sodiq Oguntola on the left hand side of the pitch before cutting inside his marker and unleashing a powerful drive with his right boot. The ball crashed into the top right hand corner of the goal which Drogheda keeper, Patrick Dunican, could do little about.

Drogheda looked to make an immediate response and much of their attacking play was coming through their winger, Adam Wixted.

Wixted, who was looking to give young Shelbourne left back, Dylan Kavanagh, some problems, had many opportunities to put decent balls into the box, but on more than one occasion they failed to threaten the home goal, much to the frustration of the travelling fans.

The away side looked like they were beginning to warm to the task of getting back into this game, only to receive another blow on 16 minutes.

An excellent turn of pace from Lorcan Shannon brought play into the Drogheda box, where the ball was left unselfishly to Gavin Boyle, whose shot squirmed under the keeper to make the game 2-0 to the home side.

Drogheda really should have had a goal back immediately after the restart. A through ball into Derek Doyle, resulted in a one on one situation with the Shels keeper. However, Doyle could only hit the ball straight at Greg Murray and the chance was immediately gone.

Drogheda nearly got back into the game on 24 minutes in near comical fashion. Eoin Kirwan, after some good work to evade his marker, hit a speculative effort which after hitting the crossbar, ricochets off the head of the Shels keeper before going out for a corner kick.

The remainder of the half was a scrappy affair, with no team dominating, however, Shels kept Drogheda at bay thanks to some relentless pressing which resulted in Drogheda only having half chances.

Drogheda began the second half with added impetus and created two very good chances soon after the re-start.

On 49 minutes, a cross into the Shelbourne box was only half cleared, the ball fell to Sean Brennan, who’s half volley whizzed just wide of the post.

Immediately after this, Eoin Kirwan chested the ball down inside the Shels box, but his effort was excellently saved by Murray.

On 56 minutes, Drogheda had arguably their best chance to get back into the game. Drogheda left-back, Stephen Dunne, skipped past a challenge before floating a ball in to the unmarked Aaron Ashe, who under no pressure, headed the ball high and wide of the goal.

Shelbourne nearly made Drogheda regret that earlier miss, as just a minute later, Darragh Gannon put in a low cross across the face of the goal, Jamie Doyle looked to have added to his first half strike, only to arrive to the cross a second too late and the chance went a begging.

Doyle wasn’t to be denied a second goal however, as he scored from close range on 74 minutes. Some excellent interplay on the right hand side of the pitch between substitute, James English, and the impressive Lorcan Shannon, led to the latter crossing the ball to Doyle at the far post.

Doyle’s first effort was blocked but he made no mistake with his follow up effort as his shot found the back of the net. This strike guaranteed the three points with Shels seeing out the remainder of the game with relative ease.

The result last night completes a disappointing week for Drogheda who only came away with a point at home to Athlone despite leading twice during the game in addition to exiting the EA Sports Cup at the hands of Leinster Senior League side, Bluebell United.

A home tie against Cabinteely awaits Drogheda next week and they will look at this as a good opportunity to stem their recent run of disappointing results.

For Shelbourne, this result lifts them off the bottom of the table into fifth position. Their performance tonight, in addition to scoring eight goals and conceding none in their last two games, will give them belief that they can get a result against high-flying Limerick at the Market’s Field next Saturday.