The Pat Fenlon era can now truly begin at Shamrock Rovers with last seasons settling in period out of the way and the big name signings secured, it’s time for the former Bohemaians boss to deliver the goods!

While Stephen Kenny and Trevor Croly will argue they weren’t given enough opportunity to return Shamrock Rovers to league championship status, you can’t argue that the money spent at Tallaght Stadium in recent years has failed to deliver the success it should have. 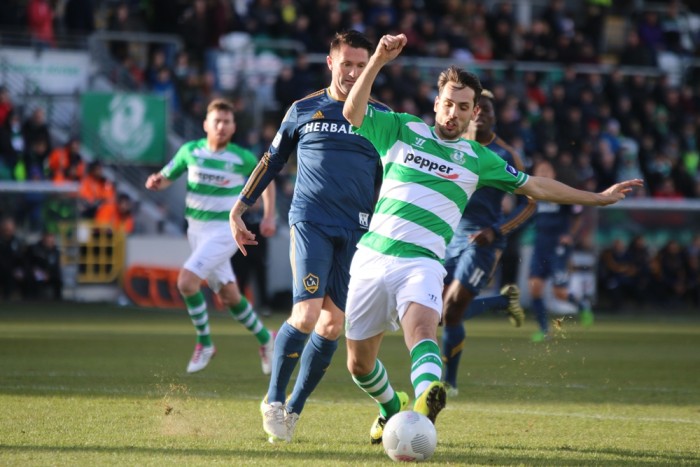 The latest crop of arrivals at Ireland’s Premier club look to have something different about them however, there is real and proven quality among the likes of Keith Fahey and Danny North while cross-channel signings such as Max Blanchard and Mikey Drennan should excite the ”Hoops” faithful greatly.

While unproven at League of Ireland level, new signings Tim Clancy and Gareth McCaffery have both worked previously with Fenlon in Scotland and could prove the be promising additions to the Rovers squad.

The ”Hoops” held the third best defensive record in 2014 and only for a glut of late goals in some of their early fixtures, they might have boasted the best. With the addition of Blanchard, who can also operate in a holding role where Gavin Brennan is sure to sure up the midfield following his arrival from Drogheda, you would expect the record of 26 goals conceded in 33 games to only improve.

It was goals at the other end that frustrated Rovers last term and in Danny North they should have the answer to some of those attacking problems, even though his fitness levels can be a worry at times.

Should North fall foul of a spell of the sidelines as he has done in the past, there is a lack of cover with only ex-Villa youth Drennan a viable front man option.

Whoever leads the line for Rovers throughout the season can expect top class service though with former Ireland international, Keith Fahey looking to pay back the significant investment placed on him.

Wide men Marty Waters and Gary McCabe will be looking to continue and improve on their impressive showings of 2014 and should that happen, North and Drennan can expect plenty of quality deliveries to feed off.

The FAI this week released a survey on how to improve the national league but common sense could have gone a long way given the comical suspension situation that has arisen for this weekends opening league games.

Almost 30 players will miss out on the big-kick off with Keith Fahey the headline name missing out for the visit of his old club and bitter Dublin rivals, St. Patrick’s Athletic.

While the game at Tallaght has almost become a lottery given the amount of suspensions to key players on both sides, the loss of ‘keeper, Brian Murphy may just be the difference maker with the inexperienced Craig Hyland having to step up in a massive pressure cooker.

Any slip up in that opening game could prove costly to Fenlon’s side with perhaps the most difficult set of March fixtures of all the Premier Division clubs.

While an away trip to City Calling Stadium should result in all three points for Rovers, games with Cork City, Sligo Rovers and Bohemains should provide a much tougher challenge.

Next month’s calendar looks a lot kinder to the Tallaght club with Dundalk the only side they will face not tipped to finish in the bottom half.

If this Shamrock Rovers team can go on a run similar to Cork City last season, you can expect to see a similar effect with the Rovers faithful among the most passionate and atmospheric in the League of Ireland.

However, as seen in the past, that fanatic following can quickly turn to a disadvantage with some players crippled by the pressure while managed by Stephen Kenny and Trevor Croly.

Having won all there is to win in the Irish game, Pat Fenlon should know exactly how to manage that kind of pressure from the terraces and boardroom and with that in mind you wouldn’t back against the Dublin native to enjoy another successful season in the capital.

Predicted finish: 4th (should win some sort of silverware)

Greatest strength: A solid back four led by Connor Kenna.

Greatest weakness: Lack of cover for a striker in Danny North whose fitness levels can sometimes be a concern.