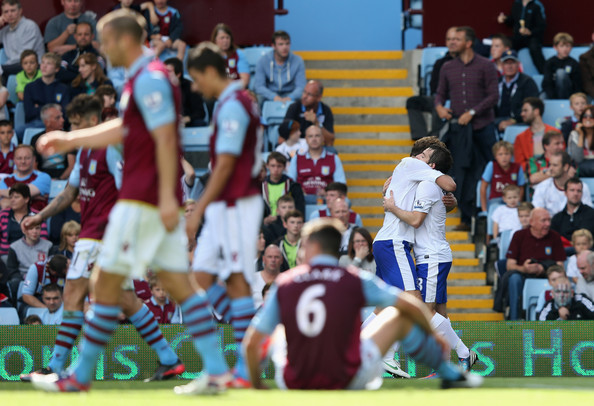 There were just nine games up for decision on the second weekend of the Barclays Premier League thanks to the postponement of Sunderland’s clash with Reading because of a waterlogged pitch at the Stadium of Light.

Their were victories for United, Chelsea, Swansea, Wigan and Everton on Saturday while Sunday’s two fixtures ended in draws.

Ryan Bailey looks at what we learnt from another exciting weekend of Premier League action..

Rooney is not a guaranteed his place at Old Trafford

Wayne Rooney paid the price for a below-par performance at Goodison Park on Monday evening as he was left on the substitute’s bench for the narrow victory over Fulham at Old Trafford. Sir Alex opted for a 4-2-3-1 formation with RVP playing the lone striker role as United attacked with purpose and real flair during the first half of their 3-2 win.

Ferguson did not leave Rooney out because he believes he is no longer a good player, but perhaps to force home the point that United do not rely on Rooney these days, if they ever really did. If Fergie continues to choose to play that formation then Rooney could find himself watching from the bench a lot more. Rooney could play as a centre forward, but now they have RVP. He could play in the playmaking, probing role behind that central striker, but now they have Shinji Kagawa and he could even play out wide, but United have several wingers better suited to the job.

Not drawing any hasty conclusions from one game but as Saturday proved, United’s team fits together better without Rooney.

If they weren’t already considered as title contenders, Chelsea have shown in the past week that they will take some beating after making it three wins from three. Wednesday’s performance against Reading might not have been vintage but the Blues turned on the style once again as they eased past Newcastle at the Bridge.

Chelsea have spent over £70 million on new players and have shown their intention from the outset as they look to win their fourth Premier League crown. Eden Hazard already looks the buy of the summer and with the likes of Marin, Oscar, Torres, Sturridge and now Moses in their attacking ranks, the Champions League winners are in formidable form.

Admit tingly they haven’t had the toughest start but if they can keep tabs with City and United or even establish a lead, then Roberto di Matteo’s side will be in a very healthy position.

Not much has changed at Swansea

Swansea City had a tumultuous offseason—losing their manager Brendan Rodgers and star midfielder Joe Allen to Liverpool, as well as star striker to Tottenham Hotspur—and it was thought that the Swans would struggle this year as a result. But the Welsh side have shown no sign of losing their free flowing style or swagger as they recorded another comprehensive and impressive victory on Saturday over West Ham.

Michael Laudrup’s side looked superb going forward as they swept aside QPR 5-0 on the opening day of the season and they were similarly lethal at the Liberty Stadium as goals from Angel Rangel, Michu and Danny Graham sealed another eye-catching victory.

Despite a change of management, Swansea’s philosophy hasn’t changed and in Michu, they have a goal scoring midfielder to replace Gylfi Sigurdsson.

There are big problems at Villa

New Villa boss Paul Lambert has a big job on his hands if he is to bring the Midlands club back up to the level they were at a couple of seasons ago. Two defeats on the bounce have emphasised the problems at Villa Park and perhaps suggest previous manager Alec McLeish was harshly treated.

The Clarets were carved open at will by a rampant and confident Everton outfit on Saturday and one feels  owner Randy Lerner needs to produce his cheque book before the transfer window closes to bolster a squad lacking in league experience and real quality.

Of equal concern to Lambert will have been Villa’s lack of creativity and firepower in the final third as the home side found themselves as sixes and sevens inside the opening quarter. To make matters worse, Ciaran Clark was sent off just before the hour mark and most of the Villa Park faithful had headed home before Karim El Ahmadi scored a consolation.

Things aren’t going to be easy for Southampton

The Saints showed last week that they are more than capable of competing in the top flight but came away from Eastlands without a point to show for their efforts and they were made to pay once again on Saturday as Wigan ran out 2-0 winners.

Nigel Adkin’s side dominated large spells of the ball but they were looking devoid of ideas and losing possession with alarming regularity. It was their first home game in the Premier League for seven years and started well but were denied on several occasions by Ali Al-Habsi and poor finishing.

Wigan made the most of the goalkeeper’s saves and Saints’ weak-looking defence as they picked up their first points of the season. It’s still too early to be drawing too many conclusions but you feel the newly promoted side need to tighten their rearguard and get on the board sooner rather than later. With Man United up next, the Saints could well find themselves pointless after their opening three games.

Arsenal will take time to adjust without RVP

Robin van Persie’s transfer from Arsenal to Manchester United was one of the biggest talking points this summer, and it seems that life at the Emirates without him will take some time to adjust.

Their second goalless stalemate in a week emphasises how much they relied on the Dutch hitman last campaign and despite dominating most of their game with Stoke, Wenger’s side has made an art-form out of passing around the opposition goal, only sporadically threatening to breach it and now without RVP, their troubles are even greater.

Santi Cazorla was excellent for the Gunners again and whilst their attack have failed to produce a single goal in 180 minutes, all hope is not lost for the North London club. Lukas Podolski and Olivier Giroud are both talented and proven goal scorers but they will take time to adjust to the intensity and speed of the Premier League.

That will take time to happen, though so the likes of Gervinho, Walcott and Chamakh have to up their game prove their worth.

Six months ago you would have said the chances of the diminutive Argentine once again becoming a Man City hero were extremely slim but the former United striker has put the troubles of the last year behind him and made up with Mancini.

With Aguero side-lined, Tevez finds himself as the player City are pinning their hopes on as the spearhead of their attack. There is no doubt that Aguero and Tevez together are as exciting an attacking partnership as there is just about anywhere in Europe, — never mind just the Premier League. But now Aguero will be missing for the next month or so, Tevez finds himself as the main man once more and he will relish that responsibility.

His 100th goal in English football secured a point for City at Anfield on Sunday and if Mancini’s side are to be successful on the domestic or European front this campaign, Tevez will be central to that.