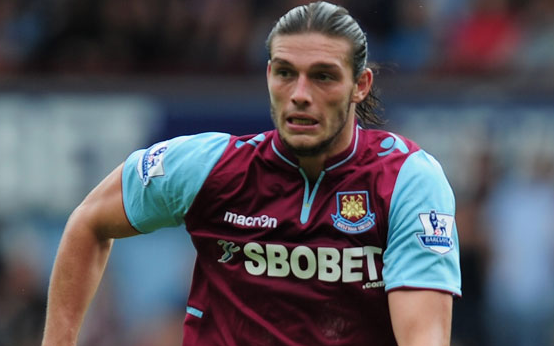 Attention turned to matters on the pitch on Saturday as nine more Premier League games were down for decision after the madness of the transfer window.

There were plenty of talking points as three of Saturday’s clashes ended in draws while West Brom continued their fine start and Man City disposed of fellow big spenders QPR. A RVP  hat trick handed United three points at St.Mary’s on Sunday after Arsenal added to Brendan Rodgers’ misery with a deserved 2-0 victory at Anfield.

Andy Carroll could be one of the signings of the season

Sam Allardyce pulled off quite a coup in persuading Andy Carroll to join West Ham on a season-long loan, and the England international showed why the Hammers were so keen to bring him on board during an impressive debut outing against Fulham.

The Cottagers had no answer to Carroll as he inspired Sam Allardyce’s side to a convincing 3-0 win and if the pony-tailed front man can reproduce the form which earned him a big money move to Liverpool, then he will be no doubt one of the signings of the season.

The 23-year-old formed a formidable partnership with West Ham skipper Kevin Nolan when the pair were together at Newcastle and it was the former Bolton midfielder who benefited from Carroll’s early knock down as he fired the Hammers into an early lead.

Carroll will be eager to show Brendan Rodgers and all at Anfield what they are missing and from the early evidence, the Reds are already ruing their decision to let him leave.

Over the course of the last few weeks, Sunderland have announced themselves as genuine top eight challengers with a Europa League spot very much in their sight. The capture of Adam Johnson and Steven Fletcher for a combined £24 million is a strong statement of intent from the North East club as they look to build on a promising start to the Martin O’Neill rein.

They might have had to settle for just a point on Saturday at the Liberty Stadium but the Black Cats look a very settled and well organised side full of attacking quality. With a front line consisting of  Sessegnon, McClean, Saha, Johnson and Fletcher among others, the Black Cats will cause the majority of Premier League rear guards plenty of problems and an opening day stalemate at Arsenal suggests defensive stability which hasn’t been evident in recent years.

It’s difficult to assess their credentials considering they have played just two games but things are looking very good for Sunderland and the Black Cats might just be in for a very successful campaign.

West Brom have firmly established themselves as a top flight side

Saturday’s victory over Everton saw the Baggies take their tally for the season to seven points from a possible nine as new boss Steve Clarke continues to impress in his first managerial post. The result ended Everton’s eleven game Premier League unbeaten run and emphasised how much the Baggies have improved in the last few months.

With the win, the Baggies moved up to third place in the table with seven points and after hammering Liverpool on the opening day and then drawing with Tottenham on the road, West Brom look like a well-oiled and disciplined unit. They added a couple of new faces to their squad during the transfer window but more importantly didn’t lose any of their bigger names with the likes of Brunt, Odemwingie and Long all remaining at the Hawthorns.

Clarke knows the hard work is ahead as he looks to maintain his sides’ fine start and somewhat surprising start to the campaign but things are looking good for the club as they look to improve on last year’s top half finish.

Andre Villas-Boas must be wondering what has gone wrong since he left Porto for England over a year ago. On Saturday afternoon his team laboured to their second 1-1 draw in succession, this time surrendering a late goal to a spirited Norwich City side.

Spurs have just two points from their opening three games and Villas-Boas must start to get Spurs clicking before they fall behind the top sides in the Premier League. He was brought in as a replacement for Harry Redknapp, who couldn’t deliver Champions League football to the North London club. AVB was meant to be the Messiah who could fix all of that for Tottenham, but for the most part, he isn’t instilling a whole lot of confidence at the moment.

Considering their poor defensive start to the season, perhaps it was a mistake that AVB didn’t reinforce his team in an increasingly pertinent area. It would be harsh to criticise new signing Jan Vertonghen for the shakiness in Spurs’ back-line—he must be given a few more weeks to fully adapt to the British game. The two goals Tottenham have conceded late on in their previous games have been as a result of a lack of decisiveness from key defenders and given that the front men aren’t exactly firing as of yet, Spurs need to tighten up at the back.

With games against Reading and QPR on the horizon, Tottenham still have time to find their feet before the more difficult fixtures come calling. Whilst neither games will be walkovers, they’ll provide decent opportunities to settle Clint Dempsey and Moussa Dembele into the team.

After that, Spurs face clashes with Manchester United, Aston Villa and Chelsea—games that they’ll need to be firing on all cylinders for. But with the quality they were able to bring in this summer, they certainly have the tools at their disposal to turn it around.

Cause for concern at Anfield

Liverpool were condemned to their worst start to a season for 50 years on Sunday as Arsenal secured a 2-0 victory at Anfield. Things haven’t gone exactly to plan for new Reds boss Brendan Rodgers as he continues to search for his first victory in the ‘Pool dugout.

There have been some positives from the opening three games as the Reds continued their evolution into Rodgers’ style of play. They were composed, they passed well and they pressed against the Gunners but the lack of scoring underlines the reality that Rodgers’ Reds share some of the same downfalls that dogged Kenny Dalglish’s side last season.

Rodgers must pull the strings together soon or risk losing the support of the fans—or worse, his job as a summer of optimism has given way to a sobering reality at Anfield. The performances of key and experienced players like Gerrard and Reina are extremely worrying while Luis Suarez continued his profligacy in front of goal.

Coming on the back of Friday’s deadline-day transfer debacle, when they failed to secure a replacement for Andy Carroll, the situation has provided huge cause for concern on Merseyside, with both owner John Henry and the manager in the firing line as the Liverpool squad looks extremely thin and lacking quality in the final third.

A team with this few weapons cannot hope to sustain a top four challenge and despite playing attractive football, a few more injuries and he will be left fielding a youth setup.

United have a lot of work to do

Sir Alex Ferguson will have taken a huge sigh of relief as his side somehow came away from St. Mary’s with all three points. United haven’t started the season convincingly at all but in typical fashion they have grinded out two victories which has kept them within touch of the early pacesetters.

All the talk at Old Trafford during the close season has been the attacking credentials of the Red Devils with the arrival of RVP but it’s at the other end which is a real concern for Fergie. The return of Rio Ferdinand didn’t do anything to help a fragile looking back four as the England international looked horribly off the pace and out of his depth.

The problems don’t stop in defence however as against a very average team, they were out-played, out-fought and, most importantly, out-thought. Tom Cleverley is a very promising player and looks to be the real deal but it’s a big tough to ask a player of his age to run the engine room and the question which has been asked for various seasons remains, why hasn’t Ferguson splashed out on a central midfielder?

Despite the shaky start, United are a top quality side and if the likes of Vidic, Ferdinand, Jones and the midfield can find their fitness and form, then the 19 time champions will be a force to be reckoned with yet again.

You have to feel for Premier League new boys Southampton as they find themselves pointless from their opening three games. Nigel Adkins couldn’t have chosen a harder set of fixture to get their campaign under way and Sunday’s defeat to United emphasised what a cruel league the top flight is.

The Saints were harshly beaten by champions City on the opening weekend after taking the lead at the Ethiad while despite dominating the game against Wigan, Southampton slumped to a 2-0 defeat. Things don’t get much easier for the newly promoted side as after the international break they face a trip to the Emirates Stadium and they will need to learn their lessons quickly or face becoming adrift at the foot of the table.

The Saints are a workman like side who don’t have many household names and despite taking the game to United and having the better of the clash for the majority, they were beaten by a cuter, smarter and more clinical opposition but they will have to learn how to win ugly unless it will be a long season.