Round fifteen of the Serie A season promised to be one of the most exciting of the campaign so far and it most definitely didn’t disappoint. The fixtures, which featured the Derby d’Italia and Derby della Capitale, both produced good football, a number of talking points and results which have re-opened the title race going into the Christmas period. 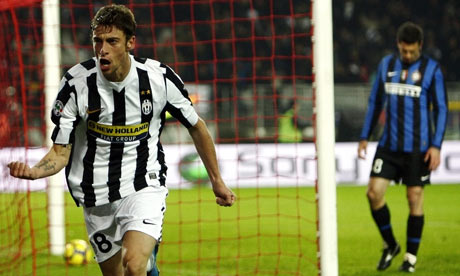 The highlight of the weekend, the Derby d’Italia between Juventus and Internazionale at Turin’s Stadio Olimpico was a game to re-ignite the season and pile the pressure on Inter at the summit of the table. Felipe Melo was credited with the goal that gave Juve the lead after twenty-one minutes (although it was difficult to see who got the last touch amidst the goalmouth scramble), reward for the home side’s bright start to such a crucial game. So incensed was Jose Mourinho at the awarding of the free-kick that led to the goal that he was sent to the stands for his protestations in dramatic scenes in Turin. However, Samuel Eto’o equalised for the Portuguese’s’ team just five minutes later, heading powerfully beyond Gigi Buffon after being left unmarked in the six yard box. The bitter rivals continued to exchange chances whilst a flurry of yellow cards were dished out by the referee throughout the game. As the game approached the hour mark, however, it was Juventus who seized the initiative with Claudio Marchisio restoring the Bianconeri’s lead with an excellent piece of close control followed by a delightful chipped finish over Julio Cesar. It was Marchisio’s goal that proved the decisive strike, dramatically closing the gap at the top of Serie A and potentially saving Ciro Ferrara’s job in the process.

The other big derby of the weekend saw Roman rivals Roma and the struggling Lazio go head-to-head in the cauldron-like atmosphere of the capital’s Stadio Olimpico. After a first-half marred by a ten minute delay when home-made bombs were thrown onto the playing surface, the Derby della Capitale sprung into life after half-time. Although Davide Ballardini’s Biancocelesti were enjoying a lot of possession, they couldn’t turn their control into goals despite a handful of chances. The best chance of the game fell to Mauri after the ball rebounded to him after Zarate had struck the post. With the goal at his mercy it seemed that Mauri could not miss, but the Italian’s effort was spectacularly saved by Julio Sergio who somehow turned the ball over the bar in what was undoubtedly the save of the season so far. The deadlock was finally broken after seventy-seven minutes when substitute Marco Cassetti turned the ball past Fernando Muslera after an excellent team move. It proved to be the only goal of the derby and one which sees Roma rise to sixth whilst Lazio’s crisis deepens, the Biancocelesti now sitting just one point off the relegation zone with Ballardini almost certain to be sacked in the very near future. 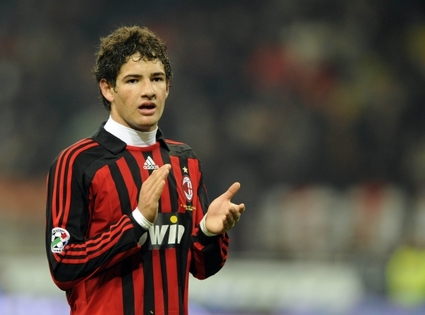 Milan also enjoyed a positive result at the weekend, Leonardo’s side beating a lacklustre Sampdoria at the San Siro on Saturday. First-half goals from Marco Borriello, Clarence Seedorf and Alexandre Pato were enough to overcome the Blucerchiati, a team who appear to have lost their defensive organisation of late and are slipping down the table at an alarming rate. Milan, on the other hand, look like a reinvigorated side and are starting to play some of their best football under their increasingly popular Brazilian coach.

In the weekend’s other games Palermo beat Cagliari 2-1 in the Derby delle Isole, Bologna also secured an impressive 2-1 win over Udinese, Fiorentina continued to improve their form with a 2-0 victory over Atalanta, Genoa and Parma drew 2-2 at the Stadio Ferraris, Chievo piled more misery upon the struggling Livorno with a 0-2 away win, Napoli scraped past Bari in a 3-2 thriller and Siena beat relegation rivals Catania by the same score line.