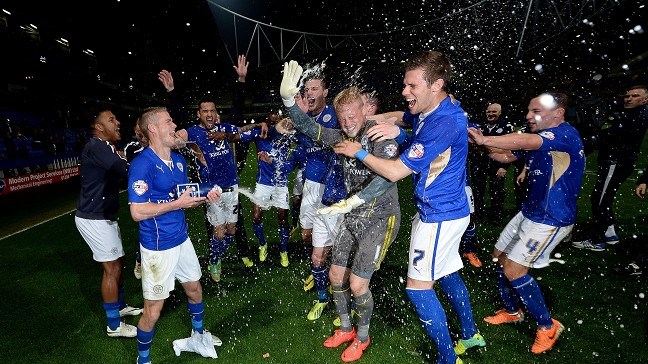 For the first time in over ten years, Filbert Way is a happy place to be for Leicester City supporters. After the dismal days under Craig Levein, Ian Holloway and Martin Allen; Nigel Pearson has instilled a confidence into the club which has not been seen since Martin O’Neill led the Foxes through their most successful period in the late nineties.

It wasn’t just the return to the Premier League which the Foxes faithful enjoyed, but the manner in which they achieved it. Having missed out on the previous season’s play-off final in dramatic fashion, many critics expected Nigel Pearson’s charges to sink without a trace; but a 1-0 win at title-favourites QPR just before Christmas sent out a clear message to the rest of the Championship. By the time that their 21-game unbeaten run eventually came to an end in early April, promotion was already assured, and the league title was well on its way.

Pearson and his backroom team have built a strong team morale which managed to bounce back from the disappointment of 2012/13, but keeping that morale when not winning game-after-game will be the 50 year-old’s toughest test.

After a season in which winning became second nature, Leicester will have to change their mentality now that they are back up against the country’s elite. With trips to the likes of Doncaster and Yeovil now replaced with journeys to Arsenal and Chelsea, the Foxes will have to quickly adjust to being underdogs after a season of being billed as favourites wherever they went.

Leicester’s success last season was well deserved, and no-one will have begrudged them the fact that they ultimately lifted the title. However their 100-point haul will ultimately count for nothing by they time August 16th comes around.

Not as much as many outsiders may have thought. Despite a handful of new signings, Pearson has seemingly decided to stick with the majority of the side which earned their place in the top-flight. While the additions he has made have varied from freebies to record signings, they will have been meticulously thought out by Big Nige and his talented scouting staff. Not only will his signings need to add strength to the team, they will also have to fit in. No player is bigger than the group, and a self-imposed wage cap has ruled out a number of targets.

Marc Albrighton was the first new man through the door, signing on a free transfer following the expiry of his Aston Villa contract. Likely brought in as the experienced head amongst a midfield lacking top-flight games, he will still have his work cut-out squeezing into the squad ahead of last year’s Player-of-the-season Danny Drinkwater, and Matty James, who has recently been tied down to a new four-year deal.

Striker Leonardo Ulloa was later brought in for a reported £8 million, finally surpassing the £5 million record paid out when Ade Akinbiyi was signed fourteen years ago. Although front pair David Nugent and Jamie Vardy hit a combined 38 goals in all competitions last term, 6′ 3″ Ulloa will likely be a threat in the air that had previously been missing.

Elsewhere; Brighton’s player-of-the-season Matthew Upson was brought in for his experience of top-flight football, and Ben Hamer signed from Charlton to slot in ahead of cult-hero Conrad Logan as back-up keeper.

24 year-old ex-Manchester United midfielder Drinkwater ran proceedings in midfield for the Foxes last season, with his performances widely praised. However facing much stronger opposition, it is likely to be Danish stopper Kasper Schmeichel who earns the plaudits this season.

Earning a place in the Championship team-of-the-year, and with his stellar display in the Denmark goal against England at Wembley, the 27 year-old son of the legendary Peter understandably attracted the attention of clubs including Arsenal and AC Milan. However, with his feet firmly on the ground, Kasper opted to stay at the King Power Stadium, choosing first team football ahead of a payday bonanza.

After spells at Manchester City, Notts County and Leeds United; his last three seasons in the East Midlands have shown that, while the similarities with his father are endless, he deserves to be recognised in his own right.

Just twelve months ago he was an unknown plying his trade in the French second tier, but now Algerian winger Riyad Mahrez has not only played for his country, but is also ready for an assault on the Premier League.

Yet another product of Nigel Pearson’s fantastic European scouting network, the 23-year-old Parisian-born midfielder arrived on the banks of the River Soar to little fanfare. But with his first goal in the Leicester blue-white-and-gold coming as a late equaliser at local rivals Nottingham Forest, the Desert Fox quickly found acceptance among the City support.

His dazzling displays were also good enough to attract the attention of Algeria coach Vahid Halihodžić, who not only named him in his 23-man squad for the World Cup in Brazil, but also handed him a starting berth in their tournament opener against Belgium.

With his trickery and pace, Mahrez has more than enough in his armoury to cause even the most seasoned Premier League defender problems.

Media reports misquoted Leicester’s owner Vichai Srivaddhanaprabha when they said the club was aiming for Europe within three years, with that timeframe actually given as the target for Premier League stability. However with the backing they have, European football will be an eventual goal for the Foxes.

For this season though, survival is the ultimate aim; and there is nothing to suggest they won’t get it, or even do better. Under Pearson’s tutelage City have improved year-on-year without spending extortionate amounts. If they can get through their tough start without too much damage, there is no reason that 15th place shouldn’t be realistic.