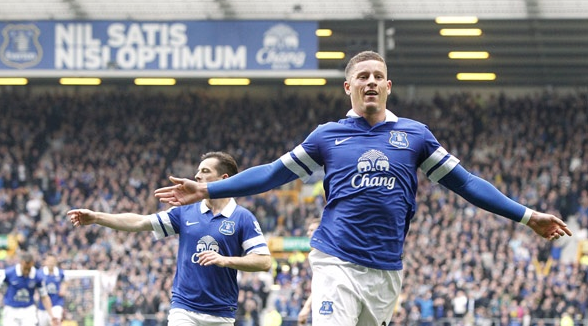 On succeeding David Moyes as Everton manager last summer, Roberto Martinez’s first words to his new chairman Bill Kenwright were: “I’ll get you in the Champions League”. A lofty target at a club whose finances are closer to the sides at the bottom of the table than their top-half rivals, but Martinez’s meticulous preparation and fluid brand of football had won many admirers by the time the Blues finished a highly creditable fifth eleven months later.

The mediocrity of a poor opening month of the season, when the only victory came in an extra time defeat of Stevenage in the Capital One Cup, was lifted by a 1-0 win over Chelsea in September – and by October the Blues were flying, a 2-1 success against Hull starting a run which would see them lose just once in 17 games in all competitions.

Martinez has somehow managed to achieve an even better standing with Evertonians than the popular Moyes, perhaps due to his natural stylishness and the class he exudes. In a homage to the Spaniard’s affability, the phrase “Solo lo mejor”  has entered the Scouse lexicon and now adorns the stands at Goodison Park, the Everton maxim “only the best” translated into their manager’s native tongue (itself derived from the Toffees’ Latin motto “Nil satis nisi optimum”).

It is a motto that Martinez also seems to apply to his transfer policy, and the ex-Swansea supremo has warned fans that he won’t be drawn into overpaying for players in order complete deals quickly this summer: “The right characters need to come to the club…it is going to take until the last day of the season to finalise the squad.”

Under Moyes Everton sometimes struggled with the demands of both European and Premier League football, and unless his small squad is radically boosted before the opening day Martinez will likely find it a similarly difficult juggling act.

Not much, really. Well of course apart from the small matter of the record-breaking transfer Romelu Lukaku form Chelsea. To sign one of the most sought after players in the world is in a word – huge. It’s testament to (and vindication of) the shared vision of both the manager and embattled chairman Bill Kenwright. With forward momentum very much the buzz-word around Goodison this summer Martinez will be aiming to preserve as much of last season’s squad as possible, and it was telling that his first signing of the summer was a man who was here on loan last term, Gareth Barry – it would appear that change is an unwanted presence at Goodison. With no major departures thus far, new arrivals such as Bosnian international Muhamed Besic, another holding midfielder, will have their work cut out to pin down a starting spot.

Whilst the £28 million marque signing will leave most Everton fans purring, realistically the Everton front-lin, it appears the Blues are closer to signing e will require further strengthening, reportedly Lukaku’s 18-year-old compatriot David Henen from Anderlecht is in close negotiations.

A central defender may also be on Martinez’s shopping list with Phil Jagielka and Antolin Alcaraz both the wrong side of 30 and Sylvain Distin defying the odds by continuing to play at the highest level aged 36. A creative midfielder to take some pressure off Ross Barkley would similarly be welcomed by supporters, but considering how much of a chunk the Lukaku deal took out of Martinez’s transfer kitty will probably mean the Spaniard will have to be less expansive in any further transfer activity.

Everton have also changed their badge again after caving in to the anger that met last season’s radical change to the crest. The latest effort more closely resembles the badges of the last two decades and the club will likely think twice before plotting such uprooting of the Blues’ fabric in the future.

Barkley really burst onto the scene last season, demonstrating his promise as early as the first game of the season at Norwich City, where his determined runs from his own penalty area caught the eyes of Match of the Day’s pundits. Wonder goals against Manchester City, Newcastle and Norwich demonstrated his ability to hurt opposition defences and Barkley knows that, with the international retirement of Steven Gerrard and Frank Lampard, a place in England’s midfield could be his for the next decade if he can maintain that sort of form at club level; certainly, his appetite will have been whetted by his cameos in England’s World Cup disaster.

Described by Martinez as a fusion of Paul Gascoigne and Michael Ballack, Ross’ role as an attacking midfielder is to play behind the main striker, leading counter-attacks with his pace and dribbling ability. 6 goals in the league last season suggests the youngster is well on the way to mastering that role.

Barkley has the raw ability to be a world-class midfielder and playing at his boyhood club, in an environment where expectations are somewhat lower than at the “big five” sides, would appear to be the perfect conditions for his development. It’s that incredible potential that makes the 20-year-old Everton’s key man ahead of Seamus Coleman – Barkley will only get better with experience.

A raft of youth-team starlets are threatening to break through this year, particularly with the Blues’ fixture list enlarged by European involvement, but it’s a player already established in the first team who will attract most attention this season. John Stones is already interesting Tottenham and Arsenal amongst others, and was included in England’s provisional World Cup squad at the end of his first season in the Premier League.

An injury to Jagielka last term gave Stones his chance, and the 20-year-old sufficiently impressed to be awarded 21 appearances in the Premier League. It’s Stones’ blend of maturity and youthfulness that sets him apart from his defensive colleagues at Goodison Park, and Martinez sees the former Barnsley man as the long-term occupant of a central defence berth, particularly with the rest of the club’s centre-backs heading towards the end of their careers.

Like Barkley, Stones will be aware that another impressive season this time around will give him a great chance of playing his way into the heart of England’s defence, an area that was exposed as undeniably weak in Brazil.

Everton’s fluid, attractive football caught teams by surprise last season and the opposition will know what to expect this time around. European commitments may also take their toll on a small squad, and injuries to key players could derail progress completely. That said, in Martinez the fans trust and the manager has the nous and skill to get the best out of a talented squad. The deciding factor, however, in whether the club can match last season’s finish will be the quality of the additions that he makes in the coming weeks. Prediction: 6th.