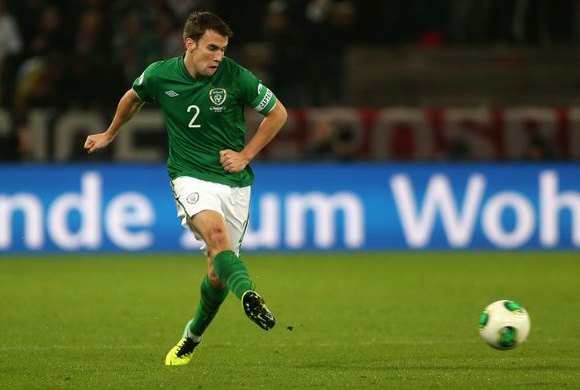 On the back of an outstanding season at club level the question of is Seamus Coleman playing in his best position has arisen once again.

The 25-year-old has been lining out at right full back for quite some time now but with weaknesses in certain positions for his club and especially his country, many fans and pundits alike have questioned if he is having as much influence on his games as possible.

Potential positions that have been mentioned for Coleman were right-wing, defensive midfield and even left back. I am going to talk about the pros and cons of these roles for the Irishman.

The man from Donegal has played most of his career in the right full back role, with much success. Coleman began his career in this position while at League of Ireland club Sligo Rovers and under manager Paul Cook he soon became one of the best in the league. In this position Seamus provides a great attacking threat with his customary overlapping runs and pinpoint crosses. He is a brilliant dribbler of the ball and also isn’t afraid to put his body on the line. Sometimes the Everton man tries to beat men and play the beautiful game in the wrong areas of the pitch. He gets away with it almost every time (only making one defensive error all season) due to his incredible skill and strength but there have been occasions where he’s took too much out the ball in dangerous areas and it must be a worry for his managers. I can only imagine Giovanni Trapattoni’s thoughts when he saw his defender dropping the shoulder and taking it round Wayne Rooney at the edge of his own box!

This position is nothing new to Coleman he has played there many times for both club and country most recently against Spain in Yankee Stadium last year. In this game he tortured Jordi Alba up and down the flank all night, tracking back to help out his defence. Coleman is quick, fast, and strong and has a bagful of tricks but with wingers of the calibre of Kevin Mirallas and Steven Pienaar ahead of him in the pecking order he is most likely to stay in his usual full-back slot on the Everton team sheet. For Ireland though there is an opportunity to play Coleman down the wing, Aiden McGeady already seems to be a favourite of the manager but frustrates many of the Lansdowne Road faithful, myself included. Aiden lacks the final ball and killer instinct that the former Sligo Rovers and Blackpool man could provide. I really think it was a missed opportunity in the end of season friendly matches by not taking a look at Coleman on the right hand side of midfield.

There hasn’t been much talk about this position for the Donegal native but I’ve seen David Alaba slot into this role for his country while playing left-back for his club, also Philipp Lahm has moved into this position for club and country from playing right-back. The Toffees’ manager Martinez has already said “he’s one of the best full back in world football”, classing him in the same category as Alaba and Lahm. He has a fantastic array of passing, completing 88%, the second best completion rate at the Merseyside club, only behind young star Ross Barkley. This could come in handy in the holding role along with his growing defensive abilities.

The inverted full back role has been executed with perfection by Chelsea’s Cesar Azpilicueta. A player with a useful ‘weak’ foot is necessary if they are to carry out the task with any success. Seamus hasn’t been proven to have this, as of yet, but it would definitely make for an interesting exercise for ‘goalman’ as he was dubbed following his impressive six goals last season. Leighton Baines and Stephen Ward may have objections but both managers may take interest in testing the Killybegs local on the left side of the back four.

I think under Martinez at Everton that there is no need to change their player of the year’s position, he is in top form and with their style of play it suits Coleman perfectly at right back. However, Martin O’Neill may need to consider playing arguably the country’s best player somewhere he can have more impact on the game.