South Korea will enter their seventh consecutive World Cup tournament this summer and be quietly confident they can overcome Argentina, Greece and Nigeria to advance.

Despite the impressive qualifying record of the Asian side, only once have they made the progression out of the group stages. It was 2002 on home soil when Guus Hiddink’s side went all the way to the semi-finals, albeit with some luck along the way.

Now 34, the veteran Ahn Jung-Hwan helped to propel the Korean’s to greatness eight years ago. Ahn is the oldest of the outfield playing squad but the striker may still have a critical role to play in South Africa.

Nevertheless, it was a surprise call-up for a striker now playing his football in China with Dalian, especially after two years out of the international scene.

Perhaps Ahn’s experience at World Cup level cannot be ignored, having scored goals at each of the last two tournaments.

Ahn shot to stardom at the 2002 World Cup when his golden goal knocked out Italy in the last 16 of the World Cup. Having been on loan at Italian side Perugia at the time Ahn’s contract was cruelly cancelled in the aftermath of his goal.

“I have no intention of paying a salary to someone who has ruined Italian football,” said Luciano Gaucci, the president of Perugia.

It was a blow for Ahn whose career could have taken off in Europe had he been given the chance. Two brief flirtations with Europe (Metz and Duisburg) followed but Ahn has mainly played football in Asia for various different club sides.

It’s fair to say Ahn will probably always be remembered (as a legend in Asian football) for his goals during the 2002 World Cup, a modest club career probably doesn’t help but with 17 goals for his country in 69 appearances, manager Huh Jung-moo is confident Ahn can make an impact in 2010.

“Ahn Jung-hwan has the experience and ability we need and performed well in the past two World Cups,” Huh said. “I think he’s capable of making an impact for the team even if he plays for a short period of time on the pitch.”

Known as the ‘Lord of the Ring’ for his celebration (kissing his ring finger), Ahn’s game intelligence and instincts in the penalty area could provide the South Koreans with a spark they need to reach the last 16. 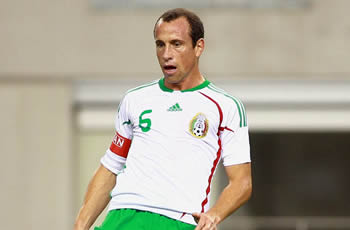 Residents of the CONCACAF section, Mexico boast an impressive World Cup record in recent tournaments, advancing through the group stages on the last four occasions.

Paired with Uruguay, France and the host nation in Group A, much could depend on the how the Mexicans fair against the South Africans in the opening game.

Skipper of his national side, Gerardo Torrado has well over 100 caps for Mexico and is the most experienced player of the current squad.

A calm and composed midfield player who loves a tackle, the Mexicans will rely heavily on the 31-year-old to help pull the strings.

Despite scoring goals not being Torrado’s strong point (only 6 goals for Mexico in 112 games), his defensive discipline will provide the North American’s with the appropriate stability in midfield, allowing more attack-minded players to flourish.

Although Torrado has appeared at the two previous World Cup’s, and performed admirably, his form has never transferred to success in Europe. In spite of spells in Spain with Tenerife, Sevilla and Racing Santander, Torrado’s career has never reached the level it perhaps should of done. In fact Torrado only managed one goal during his time in Spain, even though many claim long distance shooting is another of his strengths.

After moving back home to Cruz Azul in 2005 the Mexican has made an impressive impact, notching over 150 appearances and captaining the side to three CONCACAF Champions League finals. Torrado has also been crowned the ‘best defensive midfield player’ of the year in the Mexican championship three times, indicating his value to a team’s structure.

An 11-year veteran of the international scene, it could be argued that 2010 will be Torrado’s last World Cup. A chance then perhaps to convince those in Europe that there’s still a lot to come the man they call The Sheep.