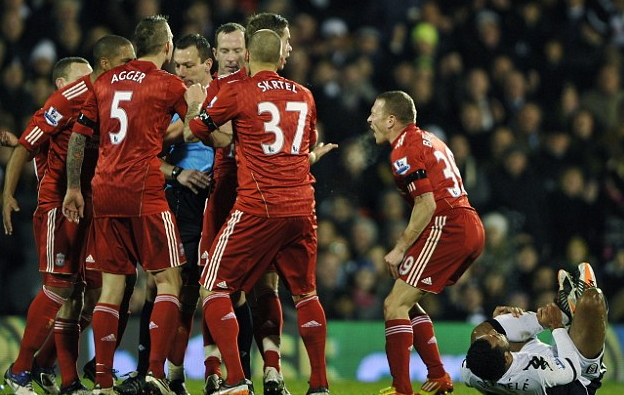 Football has unfortunately become more about destroying referees than watching and commenting on a wonderful match these days. It has evolved to such a point that is not only embarrassing but harmful. Now it must surely be time to call a halt to the deplorable abuse thrown the referees’ way. And there is only one solution.

The remedy is a much-talked about one – video technology. This sophisticated, state-of-the-art engineering exploited by so many other sports and adopted across a vast number of countries still fails to find a seat in the blinkered land of football. Not only would it reduce the quantity of incorrect decisions, but it would hopefully put an end to the unjustified vitriol that innocent, hard-working officials are subjected to every single week.

In Chelsea’s recent fixture with Manchester United, their manager, Andre Villas-Boas, commented that “you expect it (the match) to be perfect in terms of refereeing.” Yet, this perfection is a distant dream without at least the swift adoption of the brilliant technology available. Utopia is unlikely to be reached, yet, without this useful tool, we find ourselves even further from this unrealistic dream than if we possessed it. That is the case; unless you are Sepp Blatter, the head of world football’s governing body, Fifa.

This fool’s argument against utilising an evidently advantageous device consists of two contentions, both being as weak and lacking in substance as the other. The first is that the lower echelons of football, probably below the first or second divisions, would not benefit from video replays. Sepp Blatter is therefore saying that the most supported teams in the world, who make up a considerable part of the most popular sport on Earth, should not receive technology to further enhance football spectacles on the bases that, with all due respect, a few hundred people down at Tamworth FC wouldn’t get it and might feel slightly jealous.

This is so ridiculous that it is risible. Denying Real Madrid, Barcelona, Manchester United et al, with viewing figures in the hundreds of millions, the right to a higher percentage of correct decisions, which could be season-defining and in doing so possibly affect crucial finances or other vital matters, because of this is hardly credible. With Blatter’s logic – that all team’s should share an equal possibility of an accurate decision, resulting in none obtaining video replays – we should surely not rank referees in terms of ability – and that subsequently world cup final official Howard Webb should be heading to Tamworth every so often. It is utterly laughable.

Blatter’s other assertion is that having precise outcomes would leave a match less interesting to debate in the pub. You are seriously telling me that the typical man in the local public house would deliberately want the referee to make catastrophically wrong calls and influence the game in a negative manner just so he can talk about it? He must surely prefer to discuss an enthralling encounter than one marred by a terrible decision.

Yet, Blatter’s diktat has far more profound consequences than merely an incorrect throw-in or a misjudged free kick. It has resulted in a much darker side of football, of which no one wishes to witness, yet many seem to be involved in. The torrents of abuse thrown at the referee from all quarters, be it on or off the field of play, are becoming disgusting. These despicable actions are not only embarrassing for the game, but also damaging. We are not talking of the frustrated boos of a home crowd attempting to influence the referee, but of incidents such as throwing coins at the official, or an influential manager unfairly calling into question the referee’s integrity, and subsequently diminishing his reputation on no grounds but bitterness and disappointment.

This is only augmented by the ridiculous over-analysing of decisions by the media. They harshly criticise as if the referee had dozens of camera angles, close-ups and slow-motion replays to make his decision. This, unfortunately, seems to have filtered down to many football fans – who now speak with the same misguided authority. This misses the evident point that the large majority of decisions are correct, of which the referee receives minimal credit.

The media also bring up ludicrous comparisons with past decisions during their extended dissection. This is usually mistaken as one referees’ interpretation will be different from another – much like our own. Of course we must expect consistency in a match, but to expect it for every single game played is unrealistic – especially with a rule-book hardly defined by clarity This only adds to the abhorrent disrespect shown to men earning a measly sum when compared with the over-paid footballers also on the field, and arguably partaking in a more difficult, pressured occupation.

We must therefore stop blaming the referees so vociferously. This only encourages more vituperation from fans and players alike. The cause of wrong decisions is as much down to the modern deceiving player as the supposed ineptitude of a referee. It is also deeply unfair to criticise too harshly when the introduction of such obvious assistance as video technology is being prevented by archaic, regressive figures like Sepp Blatter.

We must attempt to dilute this culture of referee-bashing encouraged by managers and media alike. It is deeply unjust and is only making football look even more stripped of rectitude and deference than the rest of the fully developed sporting world.