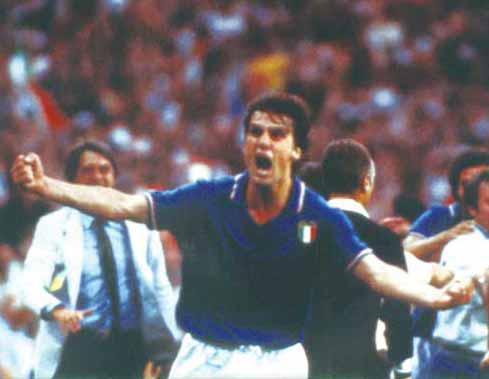 With the exception of the latter one, answers to such questions are subjective, ambiguous and often changeable on a regular basis. However there is one question I personally can answer with complete conviction and I’m confident will never be swayed on. “What is the greatest ever football celebration?” The answer is simple ‘The Tardelli Cry.’ It came in the 1982 World Cup Final against West Germany with Italy leading 1-0 Tardelli struck an accurate shot from the edge of the eighteen yard box back across keeper Hararld Schumacher into his bottom left-hand corner.

Tardelli’s subsequent celebration was a thing of hypnotic beauty. When viewed in slow motion my peripheral vision seemingly disintegrates, eyes transfixed by the flinging of his arms, the disbelieving shake of his head, the swaying of his sweat drenched hair and most predominantly by the vast emotion pouring from his eyes and mouth. For that short moment Bill Shankly’s theatrical proclamation that football is ‘much more than a matter of life of death’ appears not too far from the mark. It is no less spine tingling every time I watch it (and I’ve watched it a lot), no less goose-bump inducing, no less euphoric. The sight of a man cherishing with such exhilaration the fruition of a dream shared by literally millions of people world-wide almost brings me to tears of joy. Forget the greatest ever football celebration, it’s the sport’s greatest ever moment, period.

Visions of ‘The Tardelli Cry’ came to the forefront of my mind when at Wembley watching The Johnstones Paint Trophy Final between Chesterfield and Swindon. The recollection of the rampaging Italian in my mind’s eye in concurrence with events at Wembley that day have left my thoughts focused on one football question more than any other, ‘Why do FIFA sanction the celebration?’ In the fourth and final minute of time added on with Chesterfield leading 1-0 their striker Craig Westcarr burst through on goal slotting his shot calmly into the goal and effectively sealing victory for his team in the glorious Wembley sunshine.

Westcarr, a man who despite starting his career at Nottingham Forest has plied his trade mainly in the conference and bottom two tiers of English professional football was in the midst of the most special moment of his career so far and probably ever. The goal came directly in front of over 20,000 Chesterfield fans and unable to contain his understandable joy Westcarr, like thousands before him, removed his shirt. Indeed, the opposition manager Paolo Di Canio was himself prone to celebratory de-shirting. This was not a multi-millionaire scoring almost routinely in front of a large crowd; this was a lower league footballer on a modest wage scoring the winner at the national stadium in front of the biggest audience of his life.

Moreover, Westcarr had missed an identical opportunity minutes earlier. He must have felt his chance at a clinching a dream moment had passed and thus, when a second opportunity was presented and grasped his joy was surely amplified. Nevertheless, Westcarr was duly booked for his celebration. Only days earlier Samir Nasri suffered the same punishment for de-shirting after securing a vital late winner against Chelsea. Nasri is in the category of multi-millionaire routinely scoring in front of big crowds but it is that fact which makes his jubilant celebration commendable. Players are ever-increasingly criticised for an apparent mercenary-esque approach to the game.

City fans more probably have more reason than most to ponder just how committed to the cause their richly rewarded players are. Hence, when a player clearly illustrates his commitment through unbridled joy it is spiritedly reassuring for the clubs fans and neutral followers of the game alike. Players are placed in a winless situation whereby a lack of emotion breeds cynicism from the fans, whilst unconfined rapture so desired from fans is punished by the games officials.

The reason for such punishments is FIFA’s Law 12, Part 2, which states the following:

The mandatory caution was championed by Sepp Blatter and introduced in 2004. It is absolutely incredible to think that the more serious and sinister issues within football remain unchecked whilst its jovial component is sanctioned. Calls for technology to increase fairness and officiating accuracy remain relatively ignored; racism towards players in areas such as Eastern Europe is punished with mediocrity and the vast sums of money agents take from the game continues largely unimpeded.

How amongst these and other more serious issues Sepp Blatter was watching Farbrizio Ravanelli’s famous celebration and seeing it as an ‘unsporting’ threat to the game rather than the simply an eccentric and enjoyable spectacle most saw it as is a mystery. How can footballs governing body be witness to such positive emotion that is created by flamboyant celebrations and feel the need to penalise them? It is an absolute absurdity that the law falls under the banner of ‘unsporting behaviour.’ That is a term that describes a process of gaining unfair advantage with unfair methods; as far as I’m aware no player has managed such a feat through the medium of ecstatic celebration.

I seriously doubt anyone left Wembley thinking to themselves “how unsporting of Westcarr to remove his shirt when celebrating.” Fans, managers, pundits and probably even referees have never called for this measure and instead the former three stakeholders are critical of it. Ex-professional pundits often pinpoint it’s ridiculousness and sight it as evidence that the rule-makers lack an understanding of the games more impulsive moments, simply because they have never experienced the emotions conjured by a goal scored in front of thousands.

There could be an argument that it prevents political or provocative messages being displayed by players to fans. Yet, the law, whereby a mandatory booking is administered for “gestures that are provocative, derisory or inflammatory when celebrating a goal,” covers this. Removing your shirt in a moment of shared elation with your supporters to reveal either a bare torso or plain undergarment is none of the aforesaid. If it is then players should be banned from, or booked, for swapping shirts at the end of the game in full view of cameras and supporters. Of course that would be absurd and further highlights that it is not an ‘unsporting’ act and simply does not warrant punishment. Incredibly lifting the shirt to your neck baring your chest is not a bookable offence but over the face, neck or removed completely is.

As Morrissey would say “what is the difference does it make?” Which pedantic, uptight killjoy is being paid to formulate such a distinction and indeed such a law? Referees administer punishment almost apologetically painting a perfect picture of the laws idiocy and clear ignorance of the sport’s most positive and passionate moments. Fan and players alike live for the explosion of ecstasy a goal brings especially in title deciders and cup finals and so to punish players for wholly positive over-exuberance at delivering such moments leaves FIFA looking completely out of touch.

Such wonderful and emotional goal celebrations should be cherished especially as FIFA appear determined to stamp them out. If you have never seen ‘The Tardelli Cry’ I implore you to watch it, maybe stick on a Nessun dorma as a backing track to the mesmeric sight of Tardelli’s elation. If it has no effect on you then either you have a swinging brick where you heart should beor you just simply don’t get football, dare I say it just like FIFA.