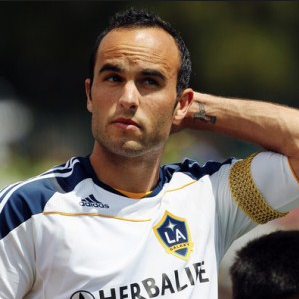 Normally one needs to die to gain Sainthood, but footballers seem to be granted a special exception. At the end of this week, Landon Donovan will play his final match for the US Men’s National Team.

As is par for the course when announcements like these are made, there has been an immense of praise and detractors coming out of the woodwork for the former US Captain.

Despite all of the hostility and passion that comes from such a debate, there is still a question that is not answered: just how good was he?

There is a routine that is followed whenever an athlete retires. At first, the media and supporters are completely behind the player, greeting him/her at every match with loud thunderous ovations and all sorts of bizarre gifts that supposedly a person who makes millions of dollars cannot afford.

Then when things get too sugary, the Disney ending is cut and ‘reality’ is brought in. People who were at first willing to cede the person the benefit of the doubt get tired of hearing about how the player is the greatest player ever and everything they did was fantastic. Statistics are brought out, any sort of criminal history, and anything controversial is examined to death. We seem to have reached this point with Donovan.

So how do we figure out what Donovan’s true value was to the game of soccer? I have had a three part litmus test when discussing such a subject:

1.) How did they perform at club level?

2.) How did they perform at international level?

3.) Were they able to succeed at the highest level possible?

Landon’s work as a player for the Los Angeles Galaxy and the US Men’s National Team certainly check off the first two boxes. A five-time MLS Cup Champion and the league’s all-time leading goal scorer, Donovan has been without a doubt the best field player in MLS history. His work rate and instinct made him stand out in a league that at times had pretty poor quality of play. It is part of the reason why he is so loved among MLS circles: he was always able to do something exciting and make the game wrth watching.

There is also of course his work with the US Men’s National Team. While his goal against Algeria in the 2010 World Cup made everyone a Landon fan, it was his work at the 2002 World Cup that really showed what he could do as a player. Defeating Portugal and Mexico to make it to the Quarterfinals is still one of the greatest achievements in US Soccer history. When you add in the four Gold Cup titles and the final appearance at the FIFA Confederations Cup he certainly has a C/V that stands up pretty strongly in American soccer circles.

That last part of that sentence is the key to understanding what sticks in the craw of some when  Landon Donovan is mentioned as a world-class player. American soccer circles, not world soccer circles. The supporters and media here in the United States like to handle Landon with kid gloves because he is probably the best field player that the United States has ever produced.

But here is the thing: just because he is the best American soccer player ever doesn’t necessarily make him world class. If there was a meeting of the world-class players there isn’t a spot for a player from every country. The best players in the world are determined by the competition that they face and what teams they play for.

If Landon were to be to considered one of the greats in international football he would have had to have played in the UEFA Champions League and in one of the top European club leagues and been successful. To be fair he did have two quality loan spells with Everton in 2010 and 2012 respectively, which helped gain him some respect abroad. But his disastrous time with Bayer Leverkusen and inability/unwillingness to ply his craft in top European club football will always be a black mark on his career. While his play at the World Cup shows that he hold his own against some of the world’s best, club football is much more difficult.

This does not mean that he was a bad player. There seems to be something lost in discourse these days when someone tries to make a critical assessment of an action or a person. Not everything is black and white. It is possible to critique Donovan’s career without calling him the second coming of Maradona or a nowhere man.

Landon’s situation reminds me a lot of Tim Cahill. Put up on a pedestal by the Aussie supporters and the FA for his work at both club and country, Cahill has had a very good career and should be proud of his accomplishments. Yet there is no clamoring for him by Aussie supporters to be considered one of the world’s elite. Why?

It seems that much of the discord that is coming out when talking about Saint Landon comes from American soccer’s own internal issues. As has been pointed out many times, Americans love to win and always want to be the best. There is a certain level of over inflation that we do because we always feel that we need to be the best at everything even if we aren’t. American soccer has wanted desperately for years to have something to hang their hat on. Landon Donovan was one of the first things that US Soccer could point to and say ‘this is what we can do’.

At the same time it only hurts US Soccer if we are not realistic about ourselves. No honest assessment can be made of where we are as a footballing nation if we over inflate our players and get upset when we are told the truth. No one cares if US Soccer’s feelings get hurt because someone does not think Landon Donovan is a world class player. It is time that US Soccer and our supporters act like mature adults and accept that not everyone will agree about Landon Donovan.

Landon Donovan’s retirement is hitting both MLS and US Soccer at an interesting time. The league and the national team have more interest in them now than they ever have had, and the quality of play of both has risen precipitously. Donovan does deserve some credit for that. Perhaps in time we will look at his decision to stay as being a masterstroke move. But until then there will always be a question as to whether or not he could play with the best. Even Sainthood can’t erase that blemish.