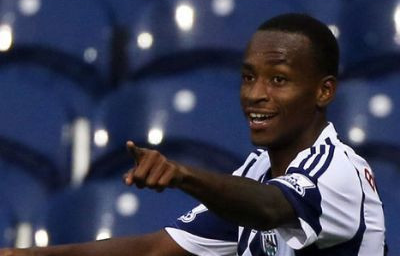 On Saturday West Bromwich Albion marked ended 35 years of misery in Manchester in spectacular style, with a remarkable 2-1 win over the Champions. The last time Albion had won at Old Trafford, Cyrille Regis, Laurie Cunningham and Tony Brown had been stars of the show, and the last time Albion had won at the home of the current league champions was during the 1966/67 season. Quite a result.

One of the stars of the show was a little-known, Burundian born academy kid Saido Berahino- who announced himself on the Premier League stage in supreme fashion by scoring the winning goal. And what a goal it was- Berahino sending a fizzing drive into the bottom left hand corner of David De Gea’s goal from 20 yards, following a lovely touch down by teammate Morgan Amalfitano.

Berahino has also been impressing massively for the England under-21s of late- with two goals in two appearances for the Three Lions, his match winner against Moldova on his England u-21 debut a particularly eye catching finish.

So where has this young gem come from? As it turns out, Berahino has one of the most interesting stories in English football…

As Berahino himself said when speaking to Fourfourtwo magazine, football was a massive part of his life, even at a very early age: “Most of the time when I was at school I’d just play football with the other boys. We used to watch big occasions on TV like the World Cup or the African Cup of Nations. We looked at the TV and hoped that one day we could get there ourselves one day.”

Football was somewhat of a distraction for the young Berahino as he endured a turbulent and unsettling younger life in his native Burundi. His family was caught up in the savage conflict between the Hutu and Tutsi tribes and at the age of just ten years- Berahino fled to England, accompanied by his mother, brother and sisters in 2002. They were granted political asylum in Newton, a poor district in Birmingham. Berahino took his fresh start and ran with it…

“The first few years were difficult because I didn’t really know anything about England – football-wise or anything. At school, I got to know a few people. I started playing in five-a-sides, then Sunday league, and then I found myself getting scouted for West Brom. I used to play for my local team, and the manager told me I’d been sent to West Brom for a trial. At the time I didn’t really know who they were, because I didn’t know the English teams apart from the big four.

When I went for a trial I didn’t know what it would be like. But I got the chance to come here and it was just better (than the club I was with) It has everything you want: all the coaches are great, it’s good for working, and you can improve your weaknesses… they care about us making it the game.”

And work is certainly what Berahino has done since his arrival at West Bromwich Albion centre of excellence back in 2004 at u-12 level. Berahino has grappled his way up through the ranks with the Albion until finally starting to train with the first team at the age of 16.

The improvement made in his game, and his tireless work ethic meant that he did not go unnoticed by the England Youth setup- and Berahino was eventually called up into the England under-17 squad for the u-17 European Championships in Liechtenstein. Berahino played a starring role as England romped to victory in the tournament (Sunderland forgotten man Conor Wickham scoring the winning goal in the final against Spain), and it was this tournament that provided a catalyst for his career.

“It was really amazing. I was sleeping and got a phone call. I thought I was dreaming or something! It was really good to be involved in that tournament, especially with players my age. It was a good experience. And playing at the tournaments with the best players – you can’t ask for more than that.”

The start of the 2011-12 season saw Berahino further his reputation- scoring 10 goals in 22 games out on loan at Northampton and Brentford (the latter loan spell ending abruptly for “personal reasons”). However the arrival of Steve Clarke as West Bromwich Albion Manager at the start of the 2012/13 season provided Berahino with the first team opportunities he needed to impress at the Hawthorns.

Clarke provided Berahino with a debut against Yeovil in the Carling Cup for the first team- before Berahino spent a valuable time out on loan in the Championship with Peterborough, managing to grab a couple of goals in limited appearances for the struggling Championship outfit. Then his big break in the Albion First Team came at the start of the 13/14 season- and Berahino has taken it with both hands.

Given a rare start against Newport County in the Capital One Cup, Berahino raced to a first half hat-trick (including one scorching drive into the top corner from the edge of the box)- and spring-boarded his way into first team plans. Following a few substitute appearances in every one of Albion’s Premier League games this season, Berahino got his chance when brought on for the injured Scott Sinclair- ten minutes into the Baggies remarkable Old Trafford win, and the rest as they say is history.

From Burundi to Birmingham, from Phoenix United to England under-21s and from no where to scoring the winner at Old Trafford. Berahino’s spectacular winner in many ways represents somewhat of a symbolic pinnacle- but those around the club and who know him well know that he is capable of so much more. West Bromwich Albion legend  (and ironically scorer in West Brom’s last win at Old Trafford) Cyrille Regis spoke to the Express and Star on Albion’s new gem…

“I know him well, I like him. He knows where the goal is and he’s got talent.

We all love young players coming through the ranks and making their way. He’s been out on loan, he’s been learning and improving and now he’s getting into the team and making an impact. Yes, he’s got genuine talent and we’re beginning to see the fruits of that talent and ability.

Now he’s still got some way to go. Let’s remember that and for Saido himself there is the big next question – can he go up another level? Can he deal with the expectation that will come now? Can he get a run in the side, a starting position, and hold his place? This the next challenge for him. That’s the next level.

It’s tough because Albion have now got quite a group of strikers – Anelka, Long, Vydra, Rosenberg, Sessegnon, Anichebe and he’s the young lad coming through. Its great credit to him that he’s actually got on to the pitch with that sort of competition around him.”

It seems the sky could be the limit for this young man, whose footballing journey has taken him from Burundi to Birmingham. As a West Bromwich Albion supporter, I can only hope that he continues his remarkable development- because we have quite a talent on our hands. Rumours have it that Everton and notorious youth snatchers Arsenal are in for the young man from Africa.

One thing that is for sure however is that Berahino has the ability to continue his meteoric rise to the top, and cement his place there for good.

2 thoughts on “Saido Berahino: The New Talent With A Remarkable Story”