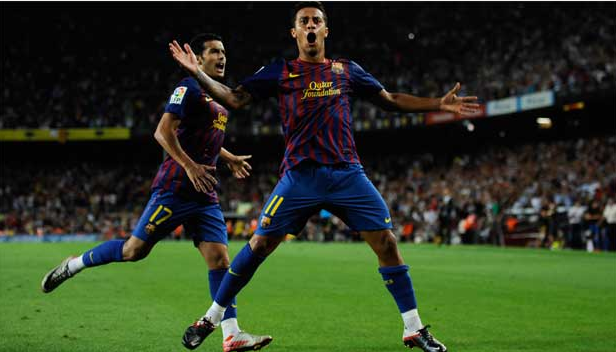 There was a five minute spell in Barcelona’s 5-0 demolition of Villarreal after captain Xavi Hernandez came on where he appeared on the right of the midfield diamond, then at the base, then on the left and then as Barcelona had the ball in the centre of the park, he realised that no one was at the point of the diamond and only Lionel Messi was occupying the Villarreal defence, and pushed forward to occupy the space. Barcelona were already 4-0 up. Most teams stagnate and relax, and although Barcelona didn’t press Villarreal as hard as they had earlier, the positional jigsaw that constantly re-arranges itself never stopped.

Pep Guardiola caused a stir with his team selection before the game kicked off with some people suggesting Alexis Sanchez was to start at right back, some saying a 3-4-3 or, as proved to be the case, a dynamic 3-3-1-3. Eric Abidal, Sergio Busquets and Javier Mascherano started, nominally, as a back three, with Seydou Keita shielding them and then two of Thiago, Andres Iniesta or Cesc Fabregas getting back to occupy the space on the flanks. But with Barcelona ending the game with over 70% possession, and Villarreal rarely having any possession in the final third, the back three were never really tested.

One of the other recurring tactical transitions during the match for Barcelona was that Eric Abidal or Sergio Busquets moved up from defence to form a supportive three at the base of the attack (again, usually with one of the three other midfielders and Seydou Keita), meaning that Barcelona’s movement had the Villarreal back four constantly having to adapt while a net of quality technical players who can recycle possession from deep and keep Villarreal on the back foot. This line of three was a consistent trend throughout the game, even during corners, where they were positioned around 30-35 yards from goal. Villarreal also found it difficult to adapt when the most offensive, usually Thiago or Iniesta, in this line broke from deep to join the attack, meaning Villarreal were outnumbered in the final third. The dynamism of Barcelona’s midfield meant that they were always primed to either win the ball back or move the fixed Villarreal players around and get directly at the back four.

One of the problems Guardiola faced last year was when they played at home and the opposition played deep and compact, that Barcelona – very occasionally – struggled to break them down as so much of their attacking play is dependent on moving the opposition defence out of position and having players attacking from deep or from wide, which was negated by massed, organised, defences. The addition of Cesc Fabregas now gives him the option of having two players who can play the now infamous ‘false nine’ role and, as last night, the option to play both at the same time. With Messi and Fabregas both playing, Barcelona were able to constantly rotate the point of attack, with Sanchez and Pedro athletic enough to fall deeper to negate any deficiencies in midfield when Fabregas moved forward. So at any given time, Barcelona had an attacking 3, 2 or 4 and still had players in position to recycle possession.

All of this meant that Villarreal were constantly trying to adjust to how Barcelona were attacking and found themselves lost as to how to deal with the ever-changing threat that the Blaugrana posed. They started in a 4-2-3-1, with Nilmar wide right while Borja Valero played behind Guiseppe Rossi, but changed to their normal 4-2-2-2 after 20 minutes. Even after the change, however, Villarreal had only six players who operated in any major defensive capacity, with Borja Valero and Cani not getting back to help counter-act the swarming Barcelona attack. As able defensive midfielders as Bruno and Carlos Marchena are, giving them the remit to deal with what was in effect 5 players who swapped positions regularly as well as being very able dribblers was never going to be particularly successful.

The other problem that Villarreal had was that they didn’t seem entirely sure whether to aggressively press Barcelona or sit back against them, leading to them doing neither very effectively. The backline of Cristian Zapata, Mateo Mussachio, Gonzalo Rodriguez and Joan Oriol ended up pushing up and leaving space in behind them, whilst the midfielders struggled to press Barcelona, meaning that there was space for the attackers to exploit behind the defence and the midfield had enough time to be able to play the ball in behind. Mussachio and Gonzalo, in particular, tried admirably to turn and recover as fast as possible, but the paucity of the Villarreal defence meant that Barcelona were able to regularly get behind them.

Barcelona ended up making a good Villarreal side look very ordinary, and it doesn’t help La Liga’s burgeoning reputation as nothing more than a two team league, but it was a massive signal of intent to their rivals that they are starting this season as strong as they’ve been before, perhaps even stronger given they were able to call on David Villa and Xavi from the bench and have Dani Alves, Gerard Pique and Carlos Puyol all out through injury.

Elsewhere over the weekend, Real Sociedad held on with ten men in the final minutes against Sporting Gijon to win 2-1, with Imanol Agirretxe getting a brace for the Basque side. Valencia scored twice late on to secure a dramatic 4-3 victory over Racing Santander, who were 3-1 before the, Roberto Soldado inspired, Los Che fight back. Newly promoted Real Betis scored late on to get a 1-0 over newcomers Granada, with Ruben Castro getting the winner for the Andalusian’s.

Atletico Madrid and Osasuna played out a 0-0 draw in the first of the new early afternoon Sunday kick-off’s in La Liga this year, with Atleti struggling to break down the resilient Osasuna without Kun Aguero and Diego Forlan, while new signing Falcao hasn’t officially arrived yet. Marcelo Bielsa’s Athletic Bilbao drew 1-1 at home to Rayo Vallecano, with Athletic looking very much like a side in transition as they try to adapt to the Argentinian’s methods. Getafe and Levante also played out a 1-1 draw, in what was a heated affair following new Getafe coach Luis Garcia’s decision to leave Levante in the summer. Espanyol struggled following the departure of centre forward Pablo Osvaldo to Roma and lost to a Jonathan De Guzman strike in a 1-0 loss away to Mallorca. Real Madrid started as they mean to go on with a 6-0 annihilation of Real Zaragoza, with last year’s Pichichi winner Cristiano Ronaldo scoring a hat-trick. In the last game of the day, Sevilla saw off an expensively assembled Malaga side 2-1, with former Real Madrid striker Alvaro Negredo scoring a brace.

And finally, just a word on Valencia’s young forward Paco Alcacer, who bravely played on the weekend despite losing his father after a pre-season friendly for the first team and scored a hat-trick in Mestalla’s 3-3 draw with Lleida.