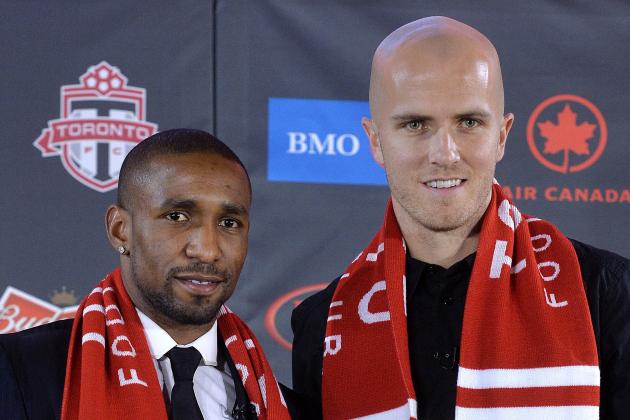 After back-to-back wins to start the Major League Soccer season, Toronto FC came crashing back to earth with a 3-0 hiding at the hands of Real Salt Lake.

The Canadians spent millions during the offseason on the likes of Michael Bradley, Jermain Defoe and Julio Cesar in a bid to turn their fortunes around having finished third last on the combined Supporters’ Shield ladder in 2013.

Their coach, former Blackburn Rovers and New Zealand defender Ryan Nelsen, has suggested that his side now has “a target on its back”, and they came unstuck on Saturday against one of the best sides in MLS.

“We just have to be honest with ourselves to know there’s still a lot of work to do,” said Michael Bradley after the defeat.

“Tonight is a good reminder of that.”

RSL defender Nat Borchers echoed those sentiments with his comments on the Extra Time Radio podcast on Monday.

“I think we looked at a lot of the things that were being said about it being a marquee matchup and about Toronto having a couple of wins,” he said.

“It kind of already seemed like they had been anointed as a high calibre team in the league so we kind of wanted to come in and prove to everybody that it takes a little bit longer to become a good team than just two games.”

The loss of head coach Jason Kreis to incoming franchise New York City FC hasn’t derailed the squad and the playing group, now under the guidance of Jeff Cassar, is largely the same as it was this time twelve months ago.

Toronto, on the other hand, have undergone a huge makeover in a bid to break away from years of mediocrity that have seen the club finish no higher than 11th (2010) since its inception in 2007.

The acquisition of Defoe from Tottenham Hotspur for a reported transfer fee of £6 million (c. US$10 million), combined with wages for the now highest paid player in MLS of around £90,000 (c. US$150,000) per week, was a real statement of intent and was announced in early January along with the signing of Bradley.

It will take the new players time to gel though and there shouldn’t be too much surprise at a Round 3 defeat to a very good Real Salt Lake side.

“We didn’t really come out of the blocks very well,” Nelsen told mlssoccer.com.

“We weren’t focused enough from the start. The goals that we conceded were pretty soft. We have a lot to improve on and a lot to get better.”

Alvaro Saborio netted twice for RSL to take his total to an impressive 59 goals in 111 games since joining in 2010, while Luis Gil added also got on the scoresheet in the first half.

Defoe, who scored three times in his first two competitive games, was substituted just after the hour mark with a hamstring problem that could keep him sidelined for the game against the Columbus Crew this coming weekend.

The battle between Bradley and Beckerman provided an interesting narrative throughout the game given both, barring injury, will be vying it out for a midfield berth in national team boss Jurgen Klinsmann’s starting eleven for the upcoming World Cup.

Bradley is up there with Clint Dempsey as US soccer’s poster boy, and his return to MLS from AS Roma during the offseason was rightly heralded as a massive coup for the league.

With 82 caps to his name to date, he is the frontrunner for a spot in the middle of the park but Beckerman’s excellent showing proved once again what a more than capable player he is.

At 31, Beckerman is probably well aware that this summer’s tournament is his best and last chance to play at the highest level having spent his entire professional club career in MLS.