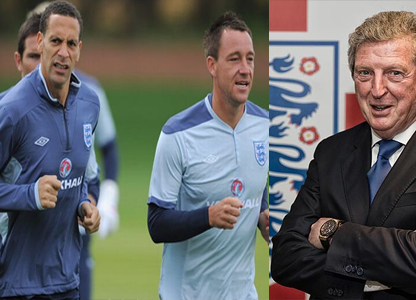 What is it about England and the build-up to international tournaments? In the 2010 World Cup the focus wasn’t on whether Messrs. Rooney, Gerrard and Heskey could spring a surprise in South Africa but on the Capello Index and how bored the players were without the WAGs.

In 2006, there was little press on whether David Beckham could captain England to their first trophy in 40 years but too much on the controversial inclusion of 17-year-old Theo Walcott in the squad. Even as far back as 1996, the media were fixated on the infamous “dentist’s chair”, overshadowing the real story of football coming home.

And nothing has changed as we dive head-first into the 2012 European Championships. Having qualified for the tournament relatively convincingly and with seemingly no pressure on the side, the focus of the nation isn’t on whether an unfancied England side can spring a surprise this summer but on the rift between former international captain Rio Ferdinand and new manager Roy Hodgson.

Ferdinand was the surprise exclusion from Hodgson’s 23-man squad when it was announced in mid-May. Hodgson said at the time that Ferdinand would not travel to Poland and Ukraine for “footballing reasons” although there was scepticism in a number of quarters given that John Terry, currently facing a charge of racial abuse against Ferdinand’s brother Anton, was selected. When Chelsea defender Gary Cahill was ruled out of the tournament through injury a week before the first game against France, Ferdinand was again overlooked but this time for the largely inexperienced Martin Kelly.

There have been question marks for a few years over Ferdinand’s fitness, with the centre-half’s back and knee problems well documented. But through rigorous physiotherapy and determination, Ferdinand was able to make 30 appearances for Manchester United last season, his highest number of games since the 2007-08 season. His manager Sir Alex Ferguson publicly expressed his doubts over whether Ferdinand could, at 33, realistically handle the strain of playing a group of football games in such a close period.

Ferguson undoubtedly had his own interests in mind when he made such a statement. He knows Ferdinand is still a top-quality centre-half and he doesn’t want to risk the slightest chance that one of his best defenders may come back to pre-season unfit and unprepared to take the Premier League title back from “the noisy neighbours”. Ferdinand, at 33, will know exactly how much stress his back can take and I’m sure Ferguson is well aware that his star defender could have only been playing three games before heading off to Cyprus on holiday.

Hodgson is an intelligent man and will have no doubt looked at this situation from every possible angle before deciding whether or not to take Ferdinand, factoring in both fitness issues, Ferdinand’s quality at centre-half and Terry’s upcoming trial for racism. But the original issue, that of actually taking Terry at Ferdinand’s expense, is no longer the focus.

Clearly Hodgson does not want to take Ferdinand to the European Championships any more but his subsequent statements to the media don’t exactly justify his decision, so much as bring it under further scrutiny. Hodgson claimed over the weekend that he did not want a player of Ferdinand’s “class and quality” sitting among the substitutes, which would make sense were it not for Stewart Downing (a player most would agree has shown little-to-no signs of quality over the course of the last season) looking likely to start against France, but I digress.

With all that said, Rio Ferdinand’s comments to the media (through his Twitter and his representatives) are hardly the expected and accepted conduct of a former England captain. You can fully understand Ferdinand’s frustration (he was after all stripped of the England captaincy by Fabio Capello just so he could hand it back to Terry). Rio may well feel like the victim in this situation and some would argue that he has every right to, but accusing the England manager through your agents of being “disrespectful” and “disgraceful” does nothing to help the situation. If Ferdinand is that upset about the situation then it is a conversation he needs to have with Hodgson behind closed doors.

And that, ultimately, is why nobody is coming out of this controversy with any credibility. Not one of these conversations (if indeed there were any at all) were conducted behind closed doors. Hodgson has undermined his own credibility by refusing to even consider Ferdinand last week having initially described his initial exclusion as “a very hard phone call to make”. Ferdinand’s subsequent response on Twitter and through the press has been one of petulance and was disappointing to see. This entire scenario has been played out through press releases and statements and has undermined an England squad determined to make an impact this summer.

Ultimately, the entire debacle is one which threatens to overshadow a tournament that England are, admittedly, expected to struggle in. But if the Three Lions do reach the quarter-finals or even the final four, the lasting memory of this tournament will not be a valiant effort on behalf of the squad but of the ongoing drama that is Terry v Ferdinand.