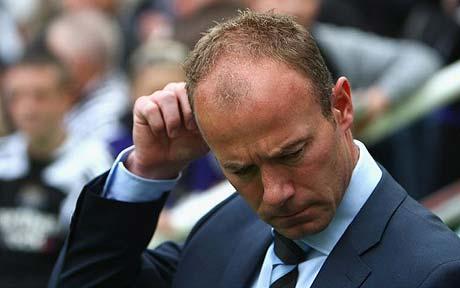 Tuesday night’s debacle was just the latest in an erratic string of performances. This Rovers side are, quite ironically, running around like headless chickens.

Their pitiful opening half of the season has created a hostile atmosphere, at Ewood Park and around the Premier League circuit. Even amidst winning performances and (completely random) four-goal hauls from Yakubu, anti-establishment chants have accompanied the men in blue and white halves, home and away.

Blackburn’s local newspapers and radio stations have even jumped on the dogpile, atop clueless Scots manager Steve Kean, issuing their own calls for him to be relieved of his duties.

Originally described by, the club’s chicken-producing parent company, Venky’s, as a charismatic leader of men, Kean has shown himself to be completely inept, and not only on the field on the play. Apparently out of touch with everyone else in the Rovers family, in TV interviews, he has habitually contradicted the thoughts of senior players, such as Chris Samba and Jason Roberts, when describing the mood in the team’s dressing room.

It’s all gone horribly Ray Harford and it seems to be a question of when, not if, the change is made.

According to certain sections of the media, Alan Shearer has been earmarked as the replacement for the beleaguered Glaswegian.

If Shearer were to make a Rovers return, the move would have uncanny parallels with his previous appointment, as manager of Newcastle.

In a desperate attempt to curry favour with the Geordie public, rotund impresario, Mike Ashley handed Shearer the poisoned chalice of sorting out a hopeless Magpies outfit, back in 2009. It’s fair to say that Shearer did act as a short-term morale booster but, ultimately, the St. James’ Park @ SportsDirect.com SuperDuperArena side were relegated to the Championship.

It’s hard to see how the 1995 Premiership-winning striker could do anything to stop Blackburn from suffering the same fate. Although he’s the Premier League’s greatest ever goalscorer, as a coach, Shearer is still a young man learning his trade. He would need time, to turn the shambolic Rovers around.

Five months may not be enough. At best, you’d expect Blackburn to have a modest January budget. They’d also be likely to face a hard time, in trying to find new players that would be willing to play for a rock bottom club.

Shearer would need to make chicken salad from the chicken proverbial that would be handed down to him, by Kean. Fashioning a side from the goalscoring spasms of Yakubu, the Catalan promise of Ruben Rochina, the Tigger-esque energy of Junior Hoilett, Chris Samba’s big head and the fact that Paul Robinson can kick it quite far, would be the most unenviable of tasks.

The facts are there for all to see, Blackburn have only won seven games of football in the past year. Their recent run of form not only includes the disastrous Bolton result but also an embarrassing League Cup exit, at hands of (bankrupt, lower league side) Cardiff. Manager Kean’s excuses have ranged from injury problems, to nothing being wrong, to deliberately losing games because he wants to.