I’d not been back in Ireland since December 2013 so the chance to get back had me excited for all the right reason – family, friends, food, football (kind of in that order too).

During the brief stopover in Amsterdam, I did an interview with RTE Radio 1 about Racism in Russian Football and the potential impact on the World Cup in 2018. 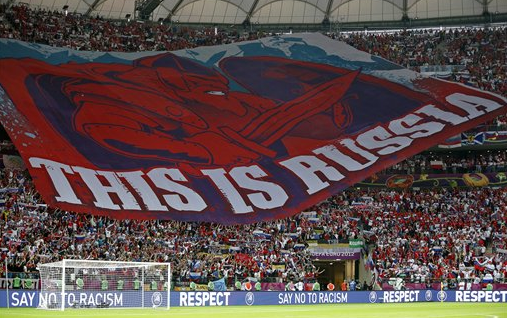 A week later I did an almost identical piece with Russian radio, from the comfort of a Mulhuddart back garden. Time restrictions meant nothing approaching a discussion of the root causes of the stupidity that pervades Russian football and society was possible.

Between and since the interviews I thought about this and the current plight of Russian football. Normally I focus on the most relevant issues – finance, structure, development and how they impact on football, yet it is time to address a topic that is never going to be solved, with current thinking or needs.

Reading comments under an article on Gabon’s Guelor Kanga’s “salute” to Spartak Moscow fans and the reaction to Emmanuel Frimpong’s gesture, a wave of despair immediately washes over you. I am repulsed by morons calling others “monkeys” who were collected from the palm trees and brought to Russia. It’s offensive and sickening yet the root problems are hidden in clear view.

I’ve read, watched, listened and experienced this issue, always approaching it from an understanding point of view. Giving the benefit of the doubt, making excuses as the situation in Russian football grows worse in parallel to Russian society.

Removing the bullshit, lies, humour and the anti-soccer/Russian/humanity bias of many in the media, and their sponsors in government and business, I’m setting down the real reasons why there is such a problem with fan behaviour in Russian football, especially racism.

In these two articles I only focus on Russia, the problem of racism in other countries does not matter. Whataboutery and pointing fingers elsewhere is what the authorities and many prominent figures do automatically.

We have a scandal, they bullshit, deflect, pretend to do something, then we all forget, move on, until it happens again. So now it’s time to call it for what it is. A mess of historical proportions. Part 1 covers four general and real facts. So here goes nothing!

Russian society splintered and broke under the violence of the second (October) revolution of 1917 and a complete removal of societal norms. In the new religion Lenin got the God role, Marx and Engels and other goons slid in as Saints.

The Cold War heated up then vanished, alongside jobs and prospects, leaving the Union of Soviet Socialist Republics a motley crew of dysfunctional, highly centralised failed states, ripe for takeover by clans, strongmen and big business. The newly independent states were plundered from without and within.

In the ensuing chaos nations broke for a border and while some made it (e.g. Kazakhs, Kyrgyz, Latvians), others found a place in the new Russian Federation (e.g. Tatars, Buryats, Mary El), others were brutally kept in place (Chechens).

Ancient feuds bubbled up between or within new states, Armenia – Azerbaijan to name just one and Russia continues to exist as a crisis riven hodge-podge that barely works. The oozing resentment, snobbery and hatred are three elements keeping the VVP crew-led machine ticking over.

Drugs, familial discord, alcoholism, sexual and physical violence, ethnic tensions, nepotism, corruption at all levels and fear were constants in the Soviet Union, when Russia went out on its own the population experienced a shockwave that no country in the world had experienced (and survived) previously.

Life expectancy of the male population fell to 57-years-old in the 90’s and the birth rate collapsed. STDs, HIV and other destructive epidemics were and are rampant in Russia, laying waste to large swathes of Russian manhood.

An army officer with the elite Blue Berets told me that he fears for the future of the Russian Armed Forces, “They are invalided, coming to us from their Mother’s breast, not even knowing the basics of hygiene.”

Which leads us to…

When did men become surplus in Russia? The joke of “Why is alcoholism favoured by Russian men? Russian women” has its roots in the absolute destruction of society from the 1920’s through the 1990’s to present.

Work and oppression forced many men away from home, the family structure broke, with high rates of divorce and single mothers in the USSR. In the 1980’s and 90’s, these rose when men became effectively useless as they lost their traditional roles or became minority stakeholders in the family home.

When Anna Politovskaya wrote about her old friends and how their lives changed in the 1990’s, she was writing about a situation that occurred in many households across Russia. Hubby loses job and status, reverts to drink, loses hope, wife does what she can to put bread on the table, hubby shame spirals, leaves/thrown out of family home.

A whole generation of young people have grown up in single parent homes without Fathers or access to them. So boys look to where they can find male peers to learn from, all the while debilitated by mothers, aunts and grandmothers who would still have them breastfeeding if it were possible, which results in young boys and men looking for male guidance in all the wrong places.

Here, after a family split, the Father is shut out, blocked and eventually loses hope and walks away (or has already just made the decision to block out his former life).

Young boys are raised in same-sex homes (Mammy and Granny) and become coddled, moddled and spoiled Princes. It is the norm for girls and boys, and a new generation of dysfunction is born, and borne.

For direction often these lost boys turn to supporting a club for male company and guidance. In the majority of these groups are a very small minority of scumbags ready and able to manipulate, driving potentially normal young lads into acting like gobshites.

From flares to monkey chants, these youngsters need male and societal acceptance. Their peers do the same and the camaraderie is a narcotic which, once tasted, hooks them for life. The racist abuse starts, they won’t object, even if they don’t like what’s going on.

So desperate to be seen to fit in, they will join the idiocy or at best smile dumbly. I’ve seen this and when questioning the fools who stand idly by, am answered with a shrug, blush and shake of the head. These are the broken generation and what’s coming after them is worse.

These are the four main factors, what comes next only compounds and exacerbates the problem.

One thought on “The roots of Russian football racism – part 1”