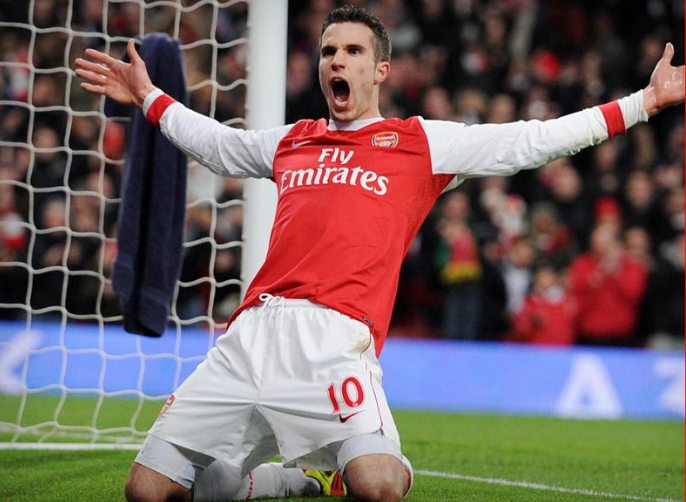 Between the ages of 5 and 16, Robin van Persie learnt his trade at a club that now proudly bares his name on one of their stands – during the grand opening at SBV Excelsior’s Stadion Woudestein in October 2010, RVP confirmed what many there had always hoped, that one day he hopes to finish his playing days at the Rotterdam club.

How long it takes his career to turn full circle is likely to depend almost entirely on how the Dutchman’s form and physique stand up to the rigors of Premier League football in the coming years.

Last season’s form suggests the Excelsior faithful might have to endure quite a wait before the return of their most famous son – thirty goals in thirty-eight league games was van Persie’s highest ever tally, twelve better than his previous best of eighteen, achieved in the 2010/11 season.

To put van Persie’s goal-scoring feats of last season in some context, only Alan Shearer, Andrew Cole and Cristiano Ronaldo have managed more than thirty goals in a single Premier League season.

Rubbing shoulders with names like that is something to be proud of and the reason why there is so much focus on the player’s future this summer, with clubs like Manchester City, Manchester United and Juventus rumored to be very keen on ending van Persie’s eight-year stay at Arsenal.

So, which-ever club he ends up at, will they be getting a player who’s only going to get better or one whose best form has been and gone? It’s almost impossible to predict but is certainly something that will have been considered very closely by potential suitors, who are well aware that they will be looking at a weekly wage way in excess of six-figures.

Lets say, hypothetically, that van Persie’s advisors would want at least a four-year deal, that’s a minimum outlay of £20.8m over the course of the contract – the figure rises to £39m if van Persie is able to command £150,000 per-week over five-years.

In the case of Juventus of Serie A, one of the clubs linked with van Persie throughout the summer, this would equate to more than a quarter of their £139m revenue for 2011, and that’s before a transfer fee is taken into consideration, with Arsenal said to be demanding £20m for their club captain.

For a player who will turn 29 before the new Premier League season kicks-off, these are incredible sums of money, which would suggest that the well-informed minds willing to part with it believe that van Persie can sustain or even better his goal-scoring form of 2011/12.

Much of this confidence may be down to van Persie’s superb fitness record last season – an ever-present in the Premier League, appearing in more than thirty league games in a single season for the first time in his career.

Across all competitions he made a total of forty-eight appearances for Arsenal, and in the process appears to have convinced many potential suitors that he’s become less injury prone with age, a real rarity in a high intensity, contact sport like football.

It’s also hugely significant when considering whether RVP can replicate or get close to his form of 2011/12, as the Dutch international heads towards his 30s. A look through Premier League history tells you he would be going against the grain in respect of age.

They’re figures that provide food for thought and illustrate the challenge ahead of Robin van Persie and his future employers, to justify the sort of financial figures mentioned earlier.

Strangely, in terms of age, Robin van Persie’s previous injury problems could actually count in his favour here. In the high-pace, super-fit environment of the Premier League every game counts and RVP’s played fewer than most players approaching their 29th birthday.

It’s far from an exact science and there are many variables, but taken at face value, van Persie had played a full league season less games than both Fowler and Owen at the same stage of their careers.

It perhaps goes a little way to explaining why van Persie seems to be reaching the peak of his powers later than most centre-forwards, but whether he can sustain it is another question entirely.

Any club investing a six-figure weekly sum will surely do so expecting that to be the case, but if the pressure ever gets too much I’m sure RVP will always be welcome at Excelsior.